Scotland's Dumbarnie Links opens on Friday, May 29. And the hype around this one is real.

The word heard most often from anyone who’s ventured to the southern slope of Fife to explore Scotland’s newest golf course is “special.” They may not even be talking about the delightfully tumbling links layout crafted by British Renaissance man Clive Clark, although they might be. It’s a description naturally applied to the land on which the design plays out, set as it is high above and spilling toward the Firth of Forth. It’s an adjective easily bestowed upon the estate’s 425-year-old Balcarres House and surrounding garden — both of which feature prominently on the national registry — and, most notably, its disarmingly gracious benefactors, Lord Anthony and Lady Balniel. However, anyone with the temerity to develop a high-end, daily-fee facility in this magical place just 10 miles from the Home of Golf better make sure it, too, is special, and Dumbarnie Links is certainly that.

I’m having this conversation with Malcolm Campbell, notable golf journalist and Fife local. He also happens to be a longstanding member of the Royal & Ancient Golf Club of St. Andrews and he’s been gracious enough to host my wife and I for drinks in the South Room of the R&A clubhouse. Immersed here, literally, in golf history, Campbell tells the story of when he moved back to Lower Largo in 1993 after a career covering the game all over the world.

“At the bottom of my garden is an old single-track railway line,” Campbell says. “One morning I got up and I walked along this old railway line for about a mile and a half. And there I came upon this vista of 400 acres or there about of pure unadulterated virgin links land.” Here, Campbell pauses for a sip of single malt before channeling Old Tom Morris. “And being a golfer, I stood there and looked at this vista links and then I thought, ‘A golf course has to be built here. That is the only thing that this piece of land was ever made for.’” Keep in mind, Campbell is saying this as we gaze out the window at the 1st tee of the Old Course.

There’s this wonderful piece of links land just a mile from where I live. Clive, a golf course must be built on it. 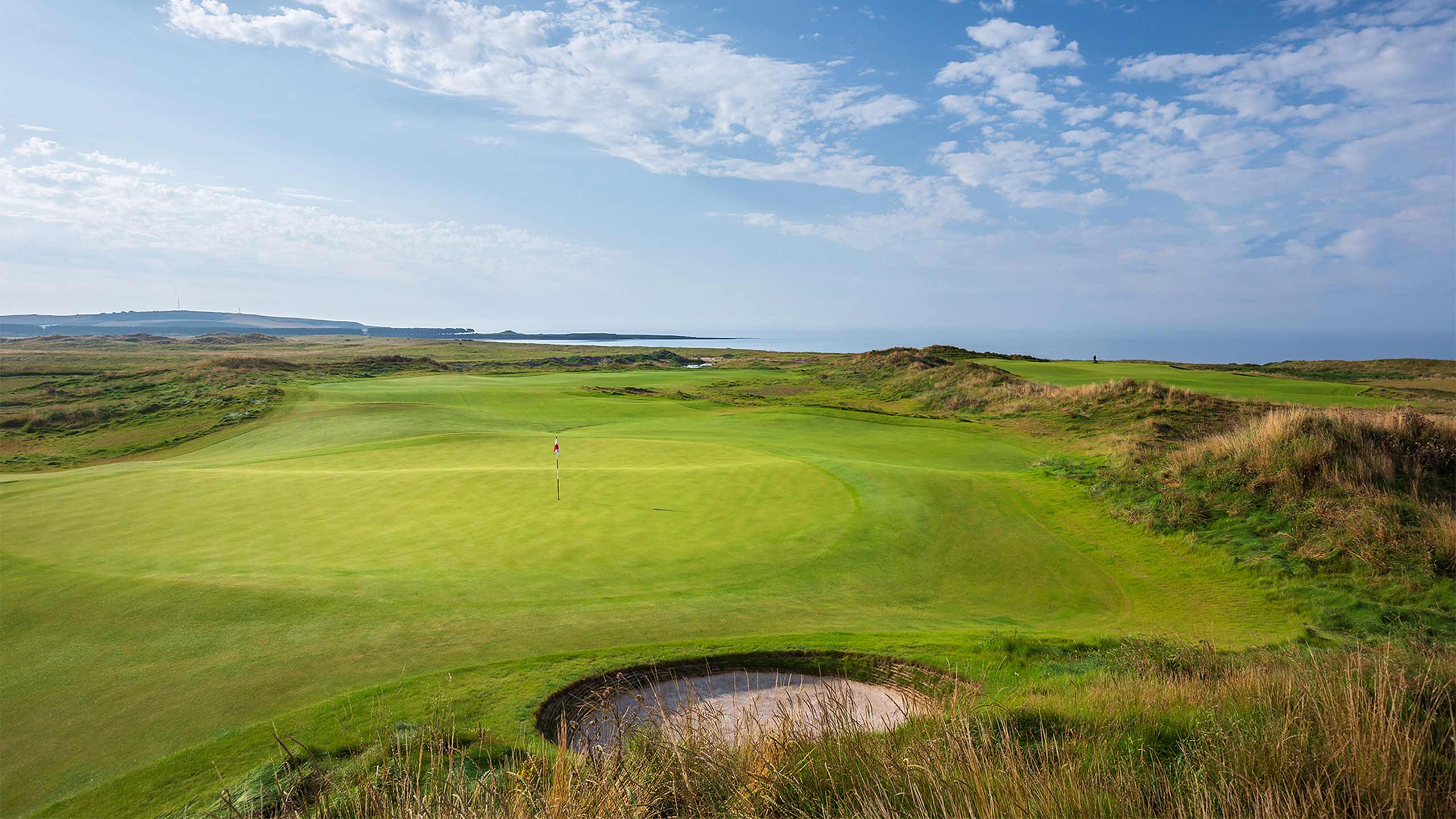 The problem was, the old scribe had no idea how to get a course built on a piece of land owned by a non-golfing nature lover (Balniel) whose family has purposely left the parcel untouched for more than five centuries.

Enter Englishman turned Californian Clive Clark. Clark is a bit of a legend himself having played on both Walker and Ryder Cup teams as well as in 11 major tournaments. Ten of those were Open Championships, and in one of them he finished third behind champion Roberto De Vicenzo (his only major victory) and runner-up Jack Nicklaus. Many of you might remember Clark as a BBC television analyst alongside Henry Longhurst and Peter Alliss. Oh, and he aced the 16th hole during the 1968 Masters.

Fast forward several years and Campbell is visiting Clark at his home in La Quinta, Calif., where he’s settled nicely into a successful course design business. After a few drinks, Malcolm gets around to mentioning this bit of pasture near the train tracks by his house back home.

“There’s this wonderful piece of links land just a mile from where I live,” he tells Clark. “Clive, a golf course must be built on it. But I can’t get it done. I don’t really know how to talk to the landowner or how to go about it.” Again, the Old Tom sip, then, “What I do know is that I think you could build a world-class golf course there.” He had Clark’s attention. And Clark had some ideas. Obviously, it’s far too simple to say the rest is history. But after several more years of allies to wrangle, planning commissions to satisfy, investors to cajole, and a future Earl to convince they would take precious care of his land, Dumbarnie Links was looking like a real possibility.

Then there was a course to build. Clark and his team moved a half-million cubic yards of earth to create the dunes that shape the rolling layout (Balniel claims his neighbor described the ordeal as Armageddon). The result is a sprawling, inviting, spectacular links course that can stretch all the way past 6,900 yards. The mostly elevated tees and several rollicking greens offer views of Largo Bay and the estuary on 14 holes, while 10 miles across the firth you can see Muirfield, North Berwick and, on clear days, Edinburgh. I’m not going to give you a tee-to-green accounting of Dumbarnie. That’s rightly the territory of accomplished players and well-traveled architecture buffs, not me. I will say, it’s indescribably gorgeous whether you play golf or not. Go there if you ever have the chance.

I had the privilege of playing my round with the man Campbell himself and I can tell you it was one of the most enjoyable 18 I’ve ever been a part of. It’s a unique opportunity to be able to walk a course with someone who’s so invested and passionate about the place. Add to that the storytelling gift of a worldly Scotsman, and, well, we should all be so lucky.

“So that all happened,” Campbell says later that afternoon as we sip drinks in his living room after having walked the very railway of his epiphany. “And we now have a golf course that I do believe will be a Top 100 golf course. That was the first thing that we wrote down.” Here comes Old Tom again. “Clive and I, when we sat down to look at it. We said, ‘It has to be a Top 100 golf course on this piece of land.’ And I believe that’s what it is. It was the stars obviously aligning somewhere along the line.” You might even venture to call it special.