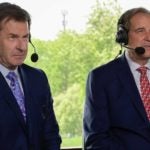 Jim Nantz will be flying solo in the booth for the PGA Tour's return.

FORT WORTH, Texas — CBS Sports golf announcer Jim Nantz will be missing something when the PGA Tour returns next week — his partner.

Nantz will call the Charles Schwab Challenge at Colonial without Nick Faldo at his side, in deference to the PGA Tour’s Covid-19 rules and regulations, two sources with direct knowledge of the arrangement told GOLF.com.

Faldo will be part of the broadcast but beamed in remotely, while Nantz will operate from a new, more compact location at Colonial Country Club. The traditional CBS tower behind the 18th green has been relocated to a small white building to the right of the 10th fairway, where Nantz will sit in front of a remote camera.

CBS Sports has scheduled a Monday afternoon press conference to discuss the arrangement. Earlier this spring, the network said it was reducing its operation for the return of the PGA Tour this summer, but did not release any details. As of Saturday afternoon, CBS has not responded to GOLF.com’s request for comment.

Other on-site CBS commentators will also be missing at Colonial, including post-round interviewer Amanda Balionis, but Trevor Immelman and Dottie Pepper will be roving the grounds as on-course reporters. Golf Channel, which is handling the first and second rounds at Colonial, will also have reduced staffing.

Longtime CBS Golf observers couldn’t remember a time that Nantz was on site for a PGA Tour event without a broadcasting sidekick.

“We’re doing a lot of new things for the first time because of the virus and everything we’re facing,” said one tournament official who was not authorized to speak publicly

Fifteen of the top 20 players in the world are in the field, including all of the top five. Earlier in the week, Colonial tournament director Michael Tothe said he expects huge TV ratings.

“It’s won’t be the best ever [in golf], because we don’t have Tiger in the field and he drives everything, but I think we’ll do a 6.0 or higher,” Tothe said, referring to the Nielson ratings. “If we had Tiger we could do a 10.”

In the last decade, Colonial has never drawn better than a 2.0 rating.

The PGA Tour is establishing a sterile bubble around the entire course and clubhouse to keep everyone, players, caddies and staff, safe and healthy. On Saturday at 5:30 p.m. local time, the entire facility was closed to members and any outside visitors and a commercial cleaning company was brought in to disinfect the clubhouse and any touch points on the course.

No fans will be permitted on the grounds during the week.

The first event cleared to have fans is the Memorial Tournament, scheduled for mid-July.