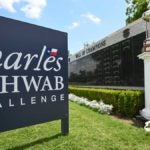 The PGA Tour plans to return at the Charles Schwab Challenge in Forth Worth.

It’s a daunting task for every professional sports league hoping to come back soon, made all the more difficult for those willing to wade into the waters first. That’s exactly what the PGA Tour is trying to do, which is why it’s not taking any risks.

With plans to return at the Charles Schwab Challenge in June, the PGA Tour rolled out its extensive new safety plan this week. It’s an impressive set of protocols and evidence that the Tour has left no stone unturned in its pursuit of keeping people safe. Part of that involves a pretty hard-line (but extremely necessary) rule in the event that a player does test positive.

First off, let’s start by saying it seems unlikely that any player or caddie will be Covid-19 positive while on-site at the event. Players will be tested before they travel to a tournament, chartered by the tour to the site, and then tested once again when they arrive. They’ll be instructed to maintain social distancing guidelines, will stay in an isolated hotel and given daily questionnaires and thermal screenings.

If a player presents an elevated temperature of “over 100.4 Fahrenheit,” that initiates a protocol whereby the player is issued a Covid-19 test. After the test, as the player awaits results, he “may go onsite for practice or play only, no access to facilities,” until the results come back, expected to be in a matter of hours. It’s unclear what would happen if the player misses his tee time due to waiting for test results.

If the test comes back positive, that player is immediately escorted off site, withdrawn from the event and given a last-place payout.

It doesn’t matter if that player is leading the event, is largely asymptomatic, is in last place or somewhere in between; you test positive, you’re out. It’s a smart but tough new rule, the kind required in the current landscape. A sign of the times would be a scenario where the leader of the event could be withdrawn from the contest for safety concerns, rewarded with a last-place check and a 10-day quarantine.

The Tour, for its part, said that it wouldn’t disclose the identity of any player who does test positive.