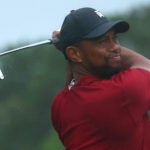 The biggest name in golf won’t be there.

Tiger Woods did not commit at Friday’s deadline to play in next week’s Charles Schwab Challenge, the Tour’s first event since the Players Championship was ended after one round due to the coronavirus.

Including the hiatus, Woods will now not have played in a Tour event since mid-February’s Genesis Invitational, a tournament he hosted. He missed the next four tournaments – the World Golf Championships-Mexico Championship, the Honda Classic, the Arnold Palmer Invitational and the Players – with Woods’ agent, Mark Steinberg, telling ESPN before the Players that Woods’ “back just not ready. Nothing concerning, just not ready.”

Woods, a 15-time major winner, had looked plenty ready a few weeks ago.

The Charles Schwab Challenge will not be lacking for star power.

Rory McIlroy, Jon Rahm, Brooks Koepka, Justin Thomas and Dustin Johnson have all committed to playing, the first time since 1986 that Colonial Country Club will see the world’s top five players. In all, 16 of the world’s top 20 will be in Fort Worth, Texas.

Woods’ next opportunity to play will be June 18-21 at the RBC Heritage in Hilton Head, S.C. The first major on the revised schedule is the PGA Championship from Aug. 6-9 at TPC Harding Park in San Francisco.