Bryson and Brooks aren’t grouped together. But did Bryson turn it down? 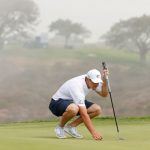 Bryson DeChambeau lines up a putt on Monday on the 13th hole at Torrey Pines during a practice round for the U.S. Open.

The question was both a bit frivolous and a bit fantastic, which, honestly, is a bit of a good way to describe this Bryson DeChambeau–Brooks Koepka brouhaha.

“Does it bother you that no one’s called him Bryson yet?” DeChambeau was asked Tuesday at Torrey Pines.

Believe it or not, it was just one short major ago when the rivalry reignited. Previously, it had included comments on pace of play, abs and ants. Now it had an eye roll. To recap (deep breath): The day after last month’s PGA Championship, a previously unseen Golf Channel video hit Twitter that showed Koepka roll his eyes and erupt after DeChambeau walked behind Koepka during an interview. From there, they went back and forth over social media. The PGA winner, Phil Mickelson, joined in. Then, at the Memorial two weeks later, fans heckled DeChambeau with chants of “Brooksy,” only to be booted from the tournament — which then prompted Brooksy himself to offer those fans free beer.

Which brings us to Open week. As they sparred off the course, there was wonder whether they would on it — at Torrey during the first and second rounds. On Tuesday morning, longtime player and instructor Brad Faxon added to that when he said on SiriusXM Radio that DeChambeau and his agent, Brett Falkoff, turned down a USGA offer to be grouped together, but Falkoff told Golfweek “the USGA did not reach out to Bryson regarding a potential pairing the first two rounds with Brooks Koepka.”

But if they had?

“I would be OK with that, but there was never really anything that went through me,” DeChambeau said.

“We’re obviously here as individuals competing, trying to win a championship,” DeChambeau said. “But I would say for the most part, there’s a line. We’re both under that line; we’re both having fun with each other. I think we’re at least, at the end of the day, it comes down to it, we’re competitors, we want to compete and kind of jab at each other, that’s fine. No issues.”

No issues. Until there might be. What happens when they aren’t individuals? U.S. Ryder Cup captain Steve Stricker wondered as much last week when he told Wisconsin Golf’s Gary D’Amato: “Yeah, it’s not making my job any easier, you know?” He’d add: “Hopefully, they can put their differences aside for the week, be big boys and come together as a team.”

Brooksy and Bryson will, DeChambeau said.

“I personally think, when we’re on a team, we’re going to be on a team, and it’s going to be a different atmosphere,” DeChambeau said. “We’re players competing individually on an individual basis out here, and I think we banter back and forth in good fun, but when it comes time to play on a team, it will be different.”