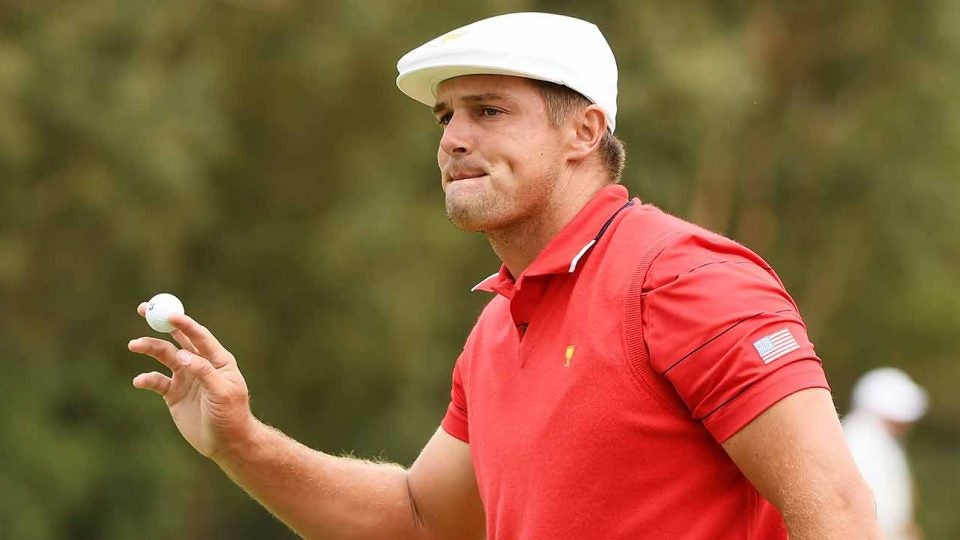 Bryson DeChambeau waves to the crowd at the Presidents Cup.
Getty Images

This time, DeChambeau took a shot at Koepka on his Twitch stream in which he speaks on anything and everything, unfettered and unfiltered. DeChambeau’s latest crusade (other than Twitch streaming) has been bulking up to “become massive,” seemingly becoming obsessed with getting as big as he can, enamored by ball speed and carry distances. When questions on the stream came in comparing his physique to his “rival” Koepka, DeChambeau didn’t hold back.

“I don’t think his genetics even make him look good,” DeChambeau said. “Did you see the Body Issue? He didn’t have any abs. I have abs.”

DeChambeau was alluding to Koepka’s ESPN Body Issue cameo earlier this year, and apparently he wasn’t impressed by what he saw. And the body comparisons didn’t end there. DeChambeau also claimed that he weighs “more than [Koepka] now. Significantly more.”

The playful (or maybe it’s not so playful) feud between the two goes all the way back to January of last year, when Koepka called the speed of some players play “embarrassing” and claimed that “it’s not that hard” to hit a golf ball, referring to the DeChambeau, the scapegoat for criticisms of slow play.

There seemed to be a resolution between the pair in August at the Northern Trust, when a pre-round meeting on the practice green allowed them to hash out their differences, which led to a joint appearance on SiriusXM PGA Tour Radio the following week publicizing their clearing of the air.

DeChambeau even joked that Koepka would “kick my ass” during their radio appearance. But it appears now that the SMU alum’s workout regimen has been ramped up; he’s not so intimidated by Koepka any longer.

Koepka might have a rebuttal at some point down the road, or maybe he’ll just use it as another chip on his shoulder to add to the batch. Either way, the DeChambeau-Koepka beef will be something to keep an eye on as the PGA Tour schedule gets going in full force.