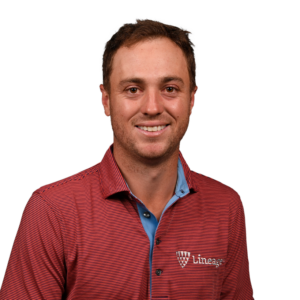 Winner of PGA Championship or U.S. Open during the past five seasons. (Exempt through December 31, 2022)

Thomas, the son of a PGA professional, secured his first major championship victory with a two-stroke win over Francesco Molinari, Louis Oosthuizen, and Patrick Reed at the 2017 PGA Championship at Quail Hollow.

Thomas grew up in Kentucky and was introduced to golf at a very young age by his father, Mike, a PGA pro at Harmony Landing outside Louisville. Thomas credits attending Tiger Woods' win at the 2000 PGA at Valhalla, when Thomas was 7, for inspiring him to make it to the PGA Tour. He claims he has watched a VHS recording of the victory more than 50 times. Thomas' grandfather, Paul, was also a PGA pro in Zanesville, Ohio. Paul played in the 1962 U.S. Open at Oakmont.

Before Thomas became a college golf star, he played in the Wyndham Championship in 2009 and became the third youngest to make the cut at a PGA Tour event aged 16 years, 3 months and 24 days. Then, as a freshman at the University of Alabama, he compiled a remarkable collegiate career – winning the Haskins Award as the top collegiate golfer in 2012. Thomas also won the 2013 NCAA Championship with the Crimson Tide in his sophomore year in 2013, and turned professional shortly after.

Thomas has been a good friend and rival of three-time major champion Jordan Spieth since the pair were children. Thomas has faced excessive comparisons to Spieth, who led the University of Texas to the NCAA title the year before Thomas achieved the same. But 2017 was seen as the year Thomas emerged from Spieth's shadow: in July, he chugged from Spieth's Claret Jug after the Texan won the Open Championship. But by August, Thomas lifted the Wanamaker trophy, which was among five PGA Tour titles he claimed during the 2017 calendar year. Thomas also won the $10 million FedEx Cup title in 2017 and the PGA Tour's Player of The Year award.

Thomas keeps his parents, Mike and Jani, close. Jani regularly travels with him on tour and would regularly go out to dinner with Thomas' friends during his rookie season on the PGA Tour. Mike is also a regular guest at Thomas' PGA Tour events. Mike has a frame of the golf balls from special moments in Justin's career, such as his US Open record-equaling 63 in the third round at the 2017 edition at Erin Hills, as well as the 59 he opened with during his 2017 Sony Open victory. During Thomas' 2018 WGC-Bridgestone win at Firestone CC, his grandparents, Paul and Phyllis Thomas, were in the gallery. Paul was a 60-year member of the PGA of America and played 1960 PGA Championship at Firestone CC.

Thomas lives in Jupiter, Florida, with close friend and fellow PGA Tour pro Bud Cauley as a housemate. Cauley was involved in a serious car accident during the 2018 Memorial Tournament in Ohio. Thomas was believed to be offered a ride in that vehicle but decided against it. In Jupiter, Thomas plays out of Medalist Golf Club where he regularly enjoys practice rounds with Tiger Woods. Close friend Woods credits Thomas among those who helped to inspire his comeback from spinal fusion surgery in 2017.

Thomas is an enthusiastic watcher of sports, regularly posting on social media about his beloved Alabama Crimson Tide football team. Thomas uses the number #34 in all of his social media accounts, which he says is a tribute to retired Red Sox first baseman, David Ortiz.

Thomas is a shoe collector, often sporting Air Jordans or Yeezys off the course. In 2017, his footwear sponsor, FootJoy, custom-designed a Player of The Year-inspired shoe for Thomas, which included graphics of his season highlights.

The Latest News on Justin Thomas