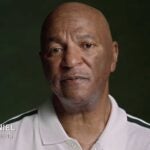 Pete McDaniel, pictured in the new 'Tiger' documentary, was close with both Tiger and Earl.

Pete McDaniel has an interesting face, with his high-mileage eyes, bright-white teeth and old-man’s mustache. There’s something both Southern and timeless about it, especially when there’s a hat on the top of his head. That is, a real hat, not a sell-the-brand baseball cap.

If you looked at a head-and-shoulders photo of Pete and were told he was a ballplayer from the 1930s, you’d believe it, and if you were told he was a professor in the history department at Emory University circa 2020, you’d surely buy that, too. He’s the author of an important golf-history book, Uneven Lies, about the Black golf experience in America. He’s had a gig (in alumni relations) at his alma mater, UNC Asheville.

If you watched the new HBO documentary Tiger, you saw a lot of Pete, sans chapeau. “Really the heart and soul of our film,” one of the two directors told me by text the other day. I feel the same way. Almost every person I’ve talked to about the documentary has mentioned Pete’s role in it. He was also prominent in a recent ESPN doc about Tiger. It was fascinating, to hear Pete’s insights into Earl and Tiger, as golfers, as Black men, as father and son. It was interesting to hear Pete, period.

I’ve seen him here and there for 25 years — fellow reporters, on the fairways-and-greens beat — but I’ve never known him to have the floor before. Not like a Rick Reilly, a Christine Brennan, a John Feinstein do so often. At 68, writing a memoir and working when he feels the urge, Pete has had a coming-out party these past few months, smack-dab in a stay-at-home pandemic.

“I’ve been around for a long time, I’ve done a lot of media, but then came this HBO special,” Pete told me the other day. (Ed. note: the author also appears in the film.) “I can’t say I wanted it. I’m more of a background singer than a lead singer. So now I got just a little taste of what some other media types have had for years. You’re known. I wasn’t looking for that. The only thing I gained from doing that [HBO] doc was the opportunity to tell my truth. And I could. Because I’m basically retired. I don’t answer to anyone. I don’t have to tow a company line. I don’t have to be so reserved anymore.”

He doesn’t say anything at all outrageous in either of the two parts of the documentary. What we’re getting is a shorthand version of 25 years of accumulated insight into a once-in-a-lifetime athlete and the father who trained him.

We talked about the most iconic moment of Tiger’s career, Sunday night at Augusta National in 1997, a 21-year-old man-child playing in his first Masters as a pro, winning by 12 shots, falling into his father’s arms. Pete had a very clear-eyed view of the game he writes about and loves. Sam Snead and Ben Hogan and Byron Nelson are great figures in Masters history — but they never had to beat Ted Rhodes there. Arnold Palmer is a great figure in Masters history, but he never had to beat Charlie Sifford there. And now there was Tiger and there was Earl and Pete was an insider in their camp.

“I think that hug was we-showed-them. Absolutely. But in a different way for Earl than for Tiger,” Pete told me. “Earl was a Black man, through and through. It burns your soul and you don’t get rid of it. He knows Ted and Charlie never went down Magnolia Lane. So now Tiger’s won. He’s exhaling. For him, it’s we-showed-them consciously. He’s forgiving, but he’s not forgetting. For Tiger, it’s different. It’s subconscious.”

You ever hear that take in your grillroom?

When Tiger was in the latter stages of his amateur career and starting out his professional one, and all through his long prime, Pete McDaniel was one of the few Black reporters on the scene. He was there for Tiger’s pre-tournament interview sessions and in Earl’s post-tournament scrums. Sometimes he’d follow them into the car.

He was the ghostwriter for Tiger’s instruction pieces in Golf Digest. As Ben Hogan had Herb Wind and Tom Watson had Nick Seitz, Tiger had Pete. But when has the father of a famous golfer had his own ghostwriter? Enter Tiger’s Pops. Enter Pete. The Earl whisperer.

Pete took Earl’s thoughts, plus some blood and ink, and got Entrenar a un Tigre out and into the world. Pardon me — that’s the book’s Spanish title. I won’t attempt the Japanese one. Dreaming up book titles is a tricky business but in this case it likely wrote itself: Training a Tiger, foreword by Tiger Woods. The subtitle is a little cringey: A Father’s Guide to Raising a Winner in Both Golf and Life. Well, the title gets the book off the shelf. The subtitle gets you to the register. You remember bookstores, don’t you?

Until recently, Pete lived in an 8,500-square-foot house about 30 minutes from the Atlanta airport. “A McMansion,” Pete told me. He grew up in Arden and went to school in Shiloh, a historically Black community on the outskirts of Asheville, N.C., and would bike past the city’s mansions on his way to the golf course, where he began caddying at age 11. When he could, he got himself a mansion to call his own. “Not that it brought me any pleasure.” Now there’s some earned wisdom for you.

He was born in 1952 and went to segregated schools through the 6th grade. He remembers hearing one of his first white teachers, describing the aftermath of the Civil War, saying, “The Nigras were freed.” At the Biltmore Forest Country Club, he was often summoned with boy. He’s old enough to remember the “whites’ fountain” and the “colored fountain” in Asheville’s public square.

His parents both worked at Christ School, an elite Episcopal boys’ boarding school in Arden, N.C. There was no chance, Pete said, that he would have had the chance to go there himself. His mother worked in the school’s laundry room, his father in the kitchen and on the grounds.

“My mom was the disciplinarian, five-foot nothing and a hundred pounds,” Pete said. She gave one warning, if you could call it that: “I don’t play the radio.” Her formal education ended with the 9th grade but she was smart as a whip, Pete says. Life with Mary McDaniel prepared Pete for Tida, Tiger’s mother.

Pete’s father, Theodore Roosevelt McDaniel, was a big man, with an appetite for drink, who fought in Europe in World War II, came back pretending to speak German and French, and loved baseball and could play it more than a little bit.

I said to Pete that his father, at least in the broad strokes of his life, sounded a lot like Earl. Pete said the similarities didn’t go deep. We’ll have to wait for the memoir. In the meantime, we have Pete on Earl, Pete on Tiger, Pete on the Black experience, Pete on golf.

“If you messed with Earl Woods, you were taking your life into your own hands,” Pete said. “But he would rather beat you with his mind than with his body.”

He was speaking of a Green Beret soldier. He could have been speaking of the soldier’s youngest son, too.