‘We did it absolutely perfectly’: Patrick Reed explains drama and cites Rory 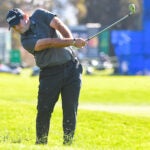 Patrick Reed hits a shot on Saturday on the 14th hole on the South Course at Torrey Pines.

Patrick Reed explained himself on CBS.

He explained himself on Golf Channel.

He explained himself at a post-round press conference.

And then he explained himself on Twitter — or at least whoever manages Reed’s certified Twitter account did so — by comparing Reed’s latest rules kerfuffle, during Saturday’s third round of the Farmers Insurance Open, to a similar situation involving Rory Mcllroy.

“RORY MCILROY @McIlroyRory DID THE SAME THING TODAY ON HOLE 18! AND DIDN’T EVEN CALL A RULES OFFICIAL OVER TO DEEM THE BALL EMBEDDED. END OF STORY,” the tweet said Saturday night.

The story started on the par-4 10th hole on the South Course at Torrey Pines, where Reed hooked his second shot left and short of the green. Reed said his ball embedded upon impact. CBS’ broadcast showed it take one bounce and nestle into the rough.

In his post-round interviews, Reed said he asked the hole volunteer, his two playing partners, Will Gordon and Robby Shelton, and the grouping’s three caddies if they had seen the ball bounce, and Reed said they all said no. At that point, as allowed under Rule 16.4, he lifted the ball to check whether it was embedded, he determined it was, and he called for a Rules official to make sure.

Reed would twice tell Brad Fabel, a PGA Tour senior tournament official, that the ball did not bounce. Fabel checked an indentation, also determined the ball had embedded and allowed Reed to take relief. He would go on to par the hole, and he’s tied for the lead entering the final round.

Reed told Golf Channel he lifted the ball before calling a Rules official over for “pace of play purposes.”

“So what a lot of the players do, as well as what I always do, is when you sit there and whether it’s an embedded ball or whether it’s a sprinkler head or anything, whenever we’re taking relief, we mark it and we check to see if it’s embedded first,” Reed said to reporter Todd Lewis during the Golf Channel interview. “Because if you lift it and you put your finger down and it’s flat down there, then you’re like, OK, the ball’s not embedded, you place the ball back as it lied and then you proceed on.

“If you sit there and you mark it or if you don’t mark it and you wait for a Rules official, it doesn’t help for pace of play purposes for groups, whether they’re behind you or you’re keeping up with the group in front of you. So a lot of the times, the main procedure that I’ve always done is, as well as what a lot of the other players do is they mark the ball to check first and if they feel that it is broken, they either go ahead and take the relief or they call over a Rules official, which, with the Rules of Golf, I always call over a Rules official.”

After his round, Reed was called into the scoring tent and watched a replay of the incident with senior tournament director John Mutch. Reed told Balionis that Mutch told him that “what just transpired was textbook.”

“I wanted to know if he saw the ball bounce and neither he nor his fellow competitors saw the ball bounce,” Mutch said in his own press conference. “It’s pretty clear watching the video that he got to within 10 yards of the ball and asked the volunteer who was standing right there, ‘Did it bounce?’ and the volunteer said it did not bounce. So it was reasonable for him to conclude that that was his ball, it did not bounce and he was then entitled to see if it was embedded.”

What if a fan said it bounced? Spectators are not at the Farmers, as they haven’t been at most tournaments during the pandemic. Reed said if “one fan said they saw it bounce, I never would have had to put a tee down and even check to see if it was embedded.”

On the par-5 18th hole, McIlroy hit his second shot 69 yards short of the green. According to Lewis, McIlroy determined that his ball was embedded without calling over a Rules official, he dropped and hit his third shot. The Golf Channel video of Lewis was tweeted by Reed’s account, along with the all-caps explanation, at 8:09 p.m. ET in a response to a Balionis tweet.

At 8:03 p.m. ET, the video, the exact wording of the tweet and the all-caps style was also tweeted by the account @useGolfFACTS. That account tweeted all of that several more times in defense of Reed.