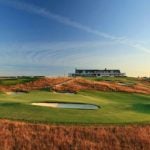 A foursome at Shinnecock Hills raised $11,000 in the @Member4aDay charity auction

“How can I help?” is a question many have asked themselves since the COVID-19 pandemic began. That’s not an easy question to answer during what feels like a helpless time. For some, the answer never comes. For Eric Sedransk, it did.

Sedransk, a Jersey City, N.J. resident, made the decision like many others to flee the Tri-state area and went to South Carolina to move in with his mother in mid-March. A strong sense of guilt made the trip south with him. Friends were providing daily updates of life in the eye of the COVID-19 storm he left behind. One afternoon while staring out at the second tee box at Palmetto Hall in Hilton Head, where his mother resides, Sedransk had an idea.

As an avid golfer who has managed brand partnerships for nearly a decade, Sedransk formed a network of people with connections throughout the golf industry. Those relationships afforded him to play courses he once dreamed of over the years. Sedransk began sharing his adventures at exclusive clubs and Top 100 Courses on his @Member4aDay Instagram page. Golf became his true passion and he used social media to connect with like-minded avid golfers.

“I started @Member4aDay because I have been fortunate to play some of the greatest golf courses in the world and I wanted to take people along for the journey,” Sedransk said. ”Although nothing compares to being there and playing the course yourself, maybe just for a minute I can help give you a sense of what being a member for a day at this club would be like.

“So I decided to begin reaching out to my network of golf pros, directors of golf, friends with country club memberships, my social media following and people I’ve connected with on the course over the years to ask them if they would donate a round and/or point me in the direction of someone else who might. I thought if I could collect enough donations I could create a charitable auction for COVID-19 Relief.”

Before Sedransk could fine-tune his work-in-progress auction, courses began offering up donations without hesitation. Shinnecock, Friar’s Head, Medalist, Pete Dye Golf Club, Vahalla, Sleepy Hollow, Silo Ridge, Glen Oaks and Sweetens Cove are just some of the whos-who list of courses that offered up access. It was an embarrassment of riches and far surpassed Sedransk’s expectations.

*Note: All round donations are valid through 2021

The Dormie Network donated a one-year membership to its network of nation-wide courses. It was also a recommendation from a contact at Dormie that put Sedransk in touch with Project Frontline, a charitable organization he would ultimately team up with to create The @Member4aDay Auction.

Houston Astros pitcher Joe Smith and his wife Allie LaForce, a sideline reporter for TNT and CBS Sports, founded Project Frontline to help support COVID-19 Relief Efforts in Houston. Every donation to Project Frontline is used to purchase a meal from a local restaurant to be distributed to local hospital workers. This simultaneously helps to support small businesses and those on the front line of the pandemic. What started in Houston has expanded in cities across the country. All proceeds from the @Member4aDay Auction would support New York City restaurants and hospitals.

With a charitable partner and donations now in place, a goal of $50,000 was set and the auction went live. In the first 24 hours, $12,000 was raised. On top of that, Sedransk got bombarded with direct messages on Instagram from people wanting to get involved. “Next thing you know we went from 20 to 48 auction items by Day 2,” Sedransk said. “Strangers began messaging me to donate rounds to the clubs they belonged to or worked at. We’re talking about bucket list courses around the world. That really warmed my heart and that’s when I knew we were on to something special.”

The @Member4aDay Auction went on to raise a total of $101,186. To put that another way, Project Frontline will turn those funds into over 10,000 meals to support restaurants and frontline workers affected by COVID-19 in NYC. There’s no shot in golf that can feel as good as that.

To think, this all stemmed from the golf connections Sedransk made over the years. It goes to show that you truly don’t know where a round of golf or who you get paired up with might lead you.

“The relationships that I formed both in person and through Instagram have been instrumental in this initiative,” Sedransk said. “For example, last fall I got paired up with a guy, who I’ve remained in touch with, and that serendipitous meeting led to an $11k donation through my charity auction. It’s amazing to think that an encounter on the course is to thank for that.”

Given the overwhelming inaugural success, will there be a future @Member4aDay golf auction?

“The short answer is yes.”