Jon Rahm withdraws while leading Memorial due to Covid: Questions and answers 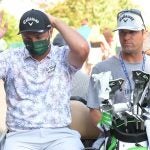 Jon Rahm on Saturday at Muirfield Village Golf Club after learning he had tested positive for Covid-19.

Jon Rahm, during Saturday’s third round of the Memorial, shot a back-nine 30 at Muirfield Village Golf Club, grabbed a whopping six-shot lead and walked off the 18th green. Below is what happened next, and what happens going forward, in a question-and-answer format:

What happened after Rahm walked off the green?

Within seconds of holing out, Rahm was met by Dr. Tom Hospel, the PGA Tour’s medical director, just off the 18th green, where he was told that he had tested positive for Covid-19 and would have to withdraw from the tournament, per Tour protocols.

“Oh my god, not again,” CBS cameras caught Rahm saying upon hearing the news. He’d put on a mask and jump aboard a cart to begin his 10-day isolation period, which is in accordance with CDC guidelines.

When did Rahm test positive for Covid-19?

Rahm tested positive for Covid-19 on Saturday. According to the Tour, Rahm was notified on Monday that he was subject to contact-tracing protocols, as he had come in close contact with a person who was Covid-19 positive. (The Tour did not name this person.) From there, the Tour said in a statement, “Rahm was given the option to remain in the competition and enter our tracing protocol, which includes daily testing and restricted access to indoor facilities.”

Rahm, who is asymptomatic, had tested negative every day until Saturday. According to the Tour, his test taken after the end of the second round, which was completed on Saturday morning, came back positive, then a confirmatory test on the original sample came back positive at 6:05 p.m., when Rahm was in the 18th fairway and walking toward the green. He’d take two putts after that.

Will Rahm be allowed to retest on Sunday?

The Tour declined to say, and his statement he posted to Twitter also did not say.

However, Levinson said that Rahm was still part of the Tour’s testing program. Levinson was then asked if Rahm were vaccinated, would he had to have tested every day like he did.

“Not necessarily,” Levinson said. “If someone had been fully vaccinated, and fully vaccinated under our protocol is, and it’s defined by the CDC, is 14 days past the full cycle of a vaccination. They do not have to test as a result of being a close contact.”

Later in the interview on Saturday night, Levinson was asked if a player had gone through the vaccination cycle, would they have to go through contact-tracing testing. No, he said, then added: “Unless — I’m sorry, unless they develop symptoms. I should reiterate that.”

Rahm played with Patrick Cantlay and Scottie Scheffler on Saturday, and Cantlay said he has not been vaccinated, while Scheffler declined to answer.

Said Cantlay: “I’ve already had Covid, so, yeah, I got to imagine I have antibodies, so I don’t feel too concerned, but obviously it is somewhat of a concern, but I got to imagine that I had it earlier this year, so I’m feeling pretty OK about it.”

Said Scheffler: “Yeah, we played golf outside in the sunlight and everything, I don’t feel very concerned. I had Covid. I’m not going to say whether or not I got vaccinated. I had Covid in the fall and, I mean, I still feel great. I mean, I — yeah, no.”

Why was Rahm forced to withdraw?

Tour protocols require any player who tests positive for Covid-19 to withdraw from a tournament.

Do Rahm’s playing partners have to withdraw?

Levinson said that Cantlay, Scheffler and Collin Morikawa, who played with Rahm on Saturday morning, were to be interviewed by the Tour’s contact tracing team on Saturday night, “and we will make a determination as to whether or not they meet that definition of close contact, and if they do, then they will take a test in the morning.”

Levinson said the Tour’s contact tracing protocol “does allow players to continue to participate as long as they are following our testing protocol and facility restrictions.”

Who is the leader of the tournament now?

Morikawa and Cantlay, who had trailed Rahm by six shots, now share the lead. Scheffler and Branden Grace are three shots back. Rahm had been the defending champion.

Has a player in the lead ever had to withdraw from a tournament due to Covid-19?

No. According to the Tour, in the 50 events played since play resumed last June after a three-month pause due to the pandemic, Rahm is the fourth player to test positive during play. The Tour also said that Rahm is the first positive, asymptomatic case as part of the Tour’s contact-tracing protocols.

How much money does this cost Rahm?

Rahm, according to Tour protocols, will still receive a stipend. “There is a stipend program for players to assist them with lost earnings and potential costs of isolation and so forth,” Levinson said.

What’s next for Rahm? When will he be allowed to play again?

Rahm is required to go into isolation for the next 10 days, which would be Tuesday, June 15 — two days before the start of the U.S. Open at Torrey Pines in San Diego. Rahm won the first of his five Tour titles at the course, in 2017 at the Farmers Insurance Open.

In a statement to Golf Channel, Craig Annis, the USGA’s chief brand officer, said: “Provided CDC requirements are met, after 10 days of isolation, he would be eligible to compete in the U.S Open.”

However, as mentioned earlier and explained by Levinson, should Rahm get two negative PCR test results spaced a minimum of 24 hours apart, then he can come out of isolation early.

Why was Rahm notified immediately after walking off the green?

Rahm was told in front of the fans circling the green and during the end of the CBS broadcast, and it made for a confusing and awkward sight. But according to Levinson, it was “difficult to find an ideal opportunity to notify him, but our medical advisor notified him before he went into scoring and that was how it was conducted.”

Has Rahm issued a statement?

How many PGA Tour players are vaccinated?

While the Tour has not required players to get vaccinated, Levinson revealed that the “fully vaccinated population is north of 50 percent.”

Levinson was asked if he was happy with that number.

“We are,” Levinson said. “You know, of course we would like to see the number higher, but full vaccination is two full weeks past the completion of a cycle. So let’s look at the Moderna vaccine, for example. That’s a six-week process. And you’re looking at a population of a lot of young people who may not have even necessarily been eligible in their hometowns until mid-April. So we’re really starting to see that percentage of people uploading their full vaccination record, that’s really starting to increase significantly over the last two weeks and I expect it to continue.”

What’s been the reaction socially?

Jack Nicklaus, the 18-time major winner and host of the tournament, tweeted the following statement: