Dirt Diaries: What it’s like embedding with a golf-course design crew (hint: intimidating) 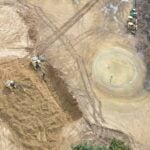 An overhead look at Overton Park in Tennessee, where construction started last month.

It’s 8 a.m. on a Wednesday, my third day on the job, and I’m stuck inside a skid steer. Ten minutes pass, then 20, and now we are approaching 30. I’m laughing, a mix of fear and embarrassment. This is not how I imagined starting my first week interning for a prominent golf-course design company.

Turns out the bucket, which hadn’t closed properly, was blocking the door from fully opening. But because it wasn’t shut, it wouldn’t allow me to move the bucket, either. Eventually my boss, Paul, figured out we needed to trick the machine into thinking the door was closed. So he handed me a wrench and told me to touch the door sensor with it, because the metal would activate the door. Boom! I lowered the bucket and escaped.

Man, this project is going to be a wild ride.

You might recognize the name King-Collins from its first celebrated design, Sweetens Cove, on the other side of Tennessee. More projects are in the works, including the one I’m tagging along on here at Overton Park, in Memphis. The municipal course originally opened in 1904 and is in dire need of some updates. The plan is to keep the 9-hole routing the same as it weaves through a park that also has jogging trails, a dog park, a zoo and an art museum. But the holes are uninspired, there’s not a bunker to be found and every green is a small circle tilted slightly from back to front. The goal: add fun and strategic elements to tee shots, approaches and the area around the greens, while still making it feel like the course could have been built in the early 1900s.

My first day on site was Jan. 18, and everyone — Rob Collins, Tad King, some shapers and a few others — was ready to go. We huddled near the clubhouse just after 7 a.m. in 35-degree weather. There were some quick introductions, but no walk-through, no group meeting or rally speech. Things were underway almost immediately. I was nervous. I had little idea what to expect and was surrounded by new faces who had no idea I had never worked a job like this before. I had never driven a bulldozer. Never worked a saw. Heck, I’ve never even worked a job that required me to be outside.

A bunch of equipment had just arrived and it needed to be moved near the 3rd and 4th holes. One of the shapers I’m living with, Lucas, yelled, “D, get in that skid steer. I’ll teach ya how to run it!” I didn’t know what a skid steer was, but in a matter of minutes I learned the basics and was following him across the property. Just like that, we were off. I had no misconceptions that this job would be easy. I knew the hours would be long — 7:30 to 5 Monday through Friday and half days on Saturday — but is there really any great way to mentally prepare yourself for a first day like this?

For my first assignment I joined other newbies in laying silt fencing to prevent water from running off into the pedestrian way and the precious Memphis drinking water. My housemate, Bruce, a fellow 23-year-old but veteran from King-Collins’ Landmand site, started up the trencher, which is essentially a scary machine that digs, well, a trench. Next, we hammered in fence posts one by one for about 1,500 feet. Three of us got on our hands and knees and shoved the dirt back into the trench to cover up the bottom of the silt fence, crawling foot after foot. I’m not sure I’ve ever felt more ridiculous.

Walkers and joggers passing by, glancing over at the land, would surely be drawn to the excavator digging a massive hole, another ripping down trees, or a third tearing up turf. They probably didn’t even notice the fencing four of us spent our entire morning installing. I never would have considered it either.

The morning flew by, mostly from the adrenaline of everything finally starting. When we finished lunch, I couldn’t fathom grinding like that for five more hours. My feet hurt, my legs were sore, my arm felt like Jell-O from hammering so many posts. I was envious of the guys sitting in machines, listening to the radio and letting the equipment do all the heavy lifting. But they are the experts, they have been doing this for years. Tomorrow, Lucas said, he’d teach me how to use the excavator.

I listened in as Rob and Trevor, one of the shapers, discussed the redesign of the 3rd hole. It was like they were talking in code. “If we just melt it off of this contour from this high spot to this lower area,” they’d say, making gestures with their hands and pointing about. Trevor asked what I thought. I was lost.

I spent much of the afternoon putting up more fencing around trees that were going to be saved. There are some beautiful old magnolia trees on the property, and the people of Memphis (rightfully so) are very protective of them. Near the end of the day Paul handed me a screwdriver and told me to take out the metal plates with each hole number. They’d make great souvenirs from the first day on the job, I thought, but don’t worry, I didn’t take any!

The rest of the first week was full of learning experiences. Now I can pick up tree trunks with the skid steer (photo above), use a grease gun on excavators and bulldozers and I’m really, really good at putting up fencing. That’s not to say everything went smoothly at first (like getting locked in that skid steer), but I think I’m getting the hang of this. Each new task with a new machine is nerve-racking. Lucas notices, and he’ll yell, “Ya can’t be scared of the machine!”

But every time I’m so tired and start to think I can’t do it anymore, someone will start talking about how excited they are for The Links at Overton Park to come to life. And I’m just as pumped to be a part of this awesome team making it happen. There’s plenty more to do, and lots more to write about. Until next time!

Travel mailbag: What are Alabama's best public courses not on the RTJ Trail?

What's a bury pit? Why there might be a lot buried beneath the surface at your golf course