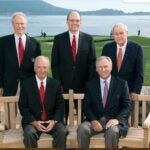 World Golf Hall of Fame Lifetime Achievement Awards will be handed out to Dick Ferris and Peter Ueberroth, two men instrumental in keeping Pebble Beach atop the list of the world’s best public bucket-list golf destinations.

The World Golf Hall of Fame announced the news on Tuesday, and the duo will be honored at the Hall’s induction ceremony on March 9, 2022, in conjunction with The Players Championship in Ponte Vedra Beach, Fla.

“We are pleased to recognize the important and long-standing contributions that Dick and Peter have made to the game of golf through their thoughtful stewardship of Pebble Beach Company,” said Greg McLaughlin, the CEO of the World Golf Hall of Fame, in a release. “We are proud to recognize them through this new award at the 2022 Induction Ceremony, paying homage to their achievements and what those have meant for the sport.”

While Ferris and Ueberroth receive their Lifetime Achievement Awards, Tiger Woods, Susie Maxwell Berning, Tim Finchem and the late Marion Hollins will enter the Hall of Fame as members.