How Dick Ferris — pal of Arnie, force in West Coast golf — has impacted your life more than you might know 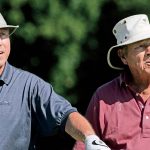 This is gonna be good: a U.S. Open on a public course, on the Pacific, in California. Prime-time golf for millions of us, straight outta Torrey. Check it out on Sunday. Morning brunch with the fam. Afternoon golf with your regulars. Pizza for supper. Afterward: Find the clicker and settle in for showtime. Your HD TV, our national championship. DJ driving on the cliffside 4th. JT putting on the windswept 11th. Jay at large, taking the whole thing in.

No, you don’t know Jay. (Unless you do.) Jay Rains, San Diego lawyer. The man who had the idea, 20 or so years ago, that Torrey Pines South could be a U.S. Open course in the first place. No Jay Rains, no Tiger–Rocco playoff in 2008. No Bryson on the driving range this year, working up a sweat in the sweet dusk air.

Every course with ambition has a Jay Rains, a person who dreams in green and knows how to get things done. The late Sandy Tatum, for instance, at Harding Park, where the PGA Championship was played memorably last year. What Tatum knew was the promise of a run-down city course. What he figured out was Willie Brown, legendary San Francisco mayor. Come together.

Which gets us to Dick Ferris of Chicago, Orlando — and the Pebble Beach Golf Links (to complete this visit to a trio of anybody-can-play-’em major venues in the Golden State). Ferris is a former CEO of United and a former chairman of the PGA Tour board. He was close to Arnold Palmer. He has impacted your life more than you might know. One Dick Ferris innovation: Call United for a flight, connect with Hertz and Hilton on the same call. He knew our needs. A flight, a ride, a bed. A tee time.

That last item is the biggest thing Dick Ferris did for us. He helped Pebble Beach reclaim its place as the ultimate American bucket-list golf resort. In 2027, the U.S. Open will return to Pebble, as it must. Talk about prime-time and center stage. The Open at Pebble.

For 20 years, starting in 1979, Pebble Beach had a series of owners. From what I could tell, they were milking it dry. You could pay an outrageous green fee and have no chance of finishing.

Then Ferris came in — with Palmer, Clint Eastwood and Peter Ueberroth — and bought the club from Japanese ownership. The two luminaries in the middle were the ultimate closers. (Who’s going to say no to Arnold? To Dirty Harry?) Ueberroth, the former baseball commissioner, was the group’s big-picture man. Ferris’ job was to get the trains to run on time again, in the bag room, on the course, in the kitchens and bars. Ferris came of age in the prosperity of America in the ’50s. Made in America is stamped on his life and, once again, on Pebble.

He’s funny because he’s direct. Ten years ago, when the Presidents Cup was at Royal Melbourne, Tim Finchem, as Tour commissioner, asked Ferris who he wanted to follow. Tiger? Phil? Adam Scott? Arrangements would be made.

“Roger?” Maltbie was there as a TV commentator. “Why Roger?”

“He’s got a cart.” Dick needed to get off his feet. He and his buddies had been playing daybreak golf at nearby courses. Of course! Dick liked to play.

And now, at 84, Dick Ferris is showing more game than ever. He has advanced ALS, Lou Gehrig’s disease. No matter: In late April, Ferris and an old friend, Sam Reeves, played in a three-day, greater Pebble team event called The Swallows. The Ferris–Reeves team, 170 years between them, received 38 combined shots. That is, their regular handicaps. There were 42 teams. The old men beat 41 of them. In a normal year, the winners are booed. This year, everybody stood and clapped and many cried. Dick Ferris, tough old bastard, can’t swallow food any more. He can’t talk. He struggles to breathe. But he can play and when he can’t he can try.

“In my 78 years, I have never been more inspired by anyone more than you,” an admirer, Bob Kavner, wrote to Ferris after the hardware was handed out. “Without words, you taught all of us to make the best of what we have. You gave a master class in dignity these past few days.”

Dick Ferris helped get Pebble ready for her close-up. As for Dick Ferris, he’s ready, period.

Gear up for summer golf