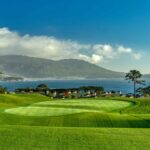 One of the lower key but still most anticipated course launches in 2021 is just a couple of weeks away. It’s taking place at Pebble Beach and it has Tiger Woods’ design team behind it. Excited yet?

On April 16, Pebble Beach will open The Hay, a 9-hole short course located just up the road from its famous neighbor Pebble Beach Golf Links — and just 16 months after the project was announced.

The course features holes ranging from 47 to 106 yards (all in, it’s only 670 yards), will be free for players age 12 and younger and is on the original property of Peter Hay Golf Course, a once-popular stop for locals in the golf-rich area. Peter Hay was an influential head pro of Pebble Beach more than half a century ago.

One of the highlights of The Hay is the 2nd, which pays homage to the iconic par-3 7th on Pebble’s big course. The 100-yard hole plays downhill to a green shaped like Pebble’s 7th. Just no cliffs or Pacific Ocean mist irrigating the green. The 2nd is perfectly named, Seven.

The other holes at The Hay honor the many figures who have helped shape Pebble Beach’s lore. The 9th is named Tiger, while the 7th is named Jack. Hay visitors will spot Tom Kite’s last name on the 8th hole, and same for Tom Watson on the 3rd. The 4th is named Bing after Bing Crosby. The 5th is Grace, after Grace Lenczyk, who won the 1948 U.S. Women’s Amateur, and the 6th is Lanny, after Mr. Wadkins, who won the 1977 PGA at Pebble.

The logo for The Hay? A golf-loving seal, which will look great on any shirt or head cover.

The course will open to the public just days after the 2021 Masters concludes. Golf season, folks — it’s upon us! Below are a handful of delightful photos of The Hay.