9 ways this U.S. Open at Winged Foot will be an Open unlike any other 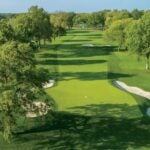 The 2020 U.S. Open at Winged Foot has presented challenges but also opportunities.

This is the fourth installment in our five-part series, The Road to Winged Foot, powered by Cisco Webex, in which we’re highlighting how players, officials, broadcasters and others are preparing for the 2020 U.S. Open unfolding this week at Winged Foot Golf Club in Mamaroneck, N.Y. Part I: Winged Foot Open champions on how to win there. Part II: A U.S. Open dark horse. Part III: Viktor Hovland’s Winged Foot game plan.

The coronavirus pandemic has disrupted virtually every aspect of our society, and this week’s U.S. Open at Winged Foot is certainly no exception. As recently as five months ago, the United States Golf Association was unsure whether the event could happen at the New York City-area club — or at all. Uncertainty reigned as the USGA worked with New York State officials, other golf and sports organizations and even other potential host sites, should the championship need to be relocated.

In early April, the USGA announced the U.S. Open would indeed remain at Winged Foot but not be conducted until September. In late June, another wrinkle: the event would be played without fans.

But, barring any other further complications, it would be played.

The result: This week’s U.S. Open will be an Open unlike any other, but not just because of the eerie quiet around the property. Thanks to some innovative thinking from U.S. Open officials and broadcasters, the 120th Open will offer you, the viewer, more access — and more ways to engage in the action — than ever before.

In the 14 years since Winged Foot last hosted a U.S. Open, much has changed. Architect Gil Hanse did extensive restoration work on the course’s bunkers and greens back in 2017, as well as significant tree removal.

“I think Gil Hanse’s tweaks have been great for the course,” Roy says. “The biggest thing that’s going to affect us is the tree removal program that they had there. Because when we were there in ’06, it was like tunnel vision, looking down in every tee box, and behind every green back down the fairway. And now with a lot of the trees being removed, there’s great vistas for us. So our cameras can get way more cool shots from different angles, and it’s going to be hugely beneficial to us.”

Select members of the U.S. Open Victory Club will have a virtual, Webex-powered front-row seat behind the 1st tee at Winged Foot West. (Webex has already pulled off a similar offering for fans of the Manchester City soccer team, who can watch virtually from the side of the pitch.)

“We’re not only using technology to bring fans on-site, and bring that to life, but also to leverage the amount of data and scoring data that we pass through everywhere on the golf course,” Singh says. “We’re really excited about being able to connect fans in that unique way, given that they can’t be on-site this year.

3. Expect to hear more from the broadcasters

Under normal circumstances, Roy likes his broadcast team to go quiet in the moments before a player hits a shot, but without less ambient noise to work with, the analysts will need to fill the void.

“When we do really big-time golf events, I prefer to have our announcers lay out more often, where they set up a shot, but then lay out,” Roy says. “That accentuates the drama when you have the murmur of a crowd. And it just makes a shot that much more dramatic. So without fans, it’s going to be a better play to have our announcers actually talk wall-to-wall. We did that over the course of U.S. Amateur, and then did it last couple of weeks at the playoffs, and it still gets your juices going. And we’ll continue to do that.”

4. Dramatic moments will be accentuated — with music!

Replays are one way to get the crowd going after a big moment. But in our fan-less reality, a music overlay will help play up the drama.

“When a big putt is made, or an incredible shot is made, I do several replays, and we pump the crowd, because that’s part of it,” Roy says. “Because the nature of the golf, most golf shots are executed, and you get the polite applause. When you get a crowd roar, that’s gold. But we don’t have that now. So if a great shot is made or a big putt is holed, and I start doing these replays, I actually add some music in, which I never would’ve done before. Dramatic music to help fill that void that you’re missing from the crowd.”

5. Family and friends of contenders could be part of the broadcast

For the U.S. Amateur in August, NBC’s broadcast utilized Webex to feature interviews and reactions from the contenders’ coaches and teammates in real time, which could provide a real boon for the U.S. Open.

“[U.S. Amateur champion Tyler Strafaci] went to Georgia Tech, so all his teammates were going crazy,” Roy says. “So we had some good reactions. And I hope that something like that will work with family members, players that are in contention at the U.S. Open. We’ll have to see how that plays out, but that’s the hope.”

Also via Webex, local kids and first responders will have the opportunity to virtually announce players on the 1st tee during practice rounds on Tuesday and Wednesday.

Have a burning question for your favorite player? Now’s your chance to ask!

“Fans will have the opportunity to interview players during practice rounds, and just get that level of interaction that they only could dream of, if they’re on-site, hoping for a signature, or for a handshake, or a fist pump,” Singh says. “Now they’re actually going to be able to ask a question.”

Can the NHL’s example of virtual fan environments work in the golf space? Maybe.

“It’s possible,” Roy says. “We’re working on something right now. And it’s still in the process of being put together. But it’s possible. We’ll see. It’s very helpful to the electricity of a telecast to have fans. And I think there’s an idea that we’re working on that we just may pull together and put it in the show.”

The U.S. Open media center annually hosts hundreds of media members from all over the globe, but this year, the number has been drastically reduced to right around 50. The solution? Enhanced digital access.

“We’re allowing off-site media outlets to stay connected, whether that be through press conferences or flash interviews,” Singh says. “And basically, taking it upon ourselves to act as a media hub, and sharing content with the rest of the world, ensuring that everyone can connect with the championship in the way that they’re used to.”