Looking for a U.S. Open dark-horse pick? This crafty veteran might be your guy 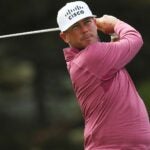 Chez Reavie is taking an analytical approach to the U.S. Open at Winged Foot.

This is the second installment in our five-part series, The Road to Winged Foot, powered by Cisco Webex, in which we’re highlighting how players, officials, broadcasters and others are preparing for the 2020 U.S. Open, set for next week at Winged Foot Golf Club in Mamaroneck, N.Y. Part I: Winged Foot Open champions on how to win there.

If you need a stallion for your U.S. Open dark horse, Chez Reavie is it. The 38-year-old vet has quietly turned himself into one of the game’s most precise players: Over the last three seasons he has finished 7th or better in driving accuracy — leading the Tour in 2018-19! — while placing in the top 30 in strokes gained: approach the green.

This is the perfect recipe for success at big, bad Winged Foot, and Reavie soars in with the conviction that comes from having tied for third at last year’s national championship. “It gives me confidence to know I can hit good shots in tough conditions on Sunday at the U.S. Open,” Reavie says of his strong showing at Pebble Beach. “However, Winged Foot’s gonna be a completely different animal. And so as far as expectations on where I might finish, I’m just gonna go out there and try to figure out the golf course and try to make as many pars as I can and see where I end up at the end of the week.”

Reavie’s studied nonchalance belies how much preparation he is putting into this Open. His statistician Mark Horton has already supplied him a Winged Foot cheat sheet that crunches the historical data from previous U.S. Opens and tips off Reavie as to which holes should be attacked for birdie and on which eking out a par is a victory.

“Scoring is all about how disciplined can you stay and how patient can you stay?” says Reavie’s swing coach Mark Blackburn. “And I’d say one of Chez’s best strengths is major championship golf. He’s got a great demeanor for that because he never really gets too excited and he never gets too down. When par’s a really good score and scoring is challenging, that’s kind of when he thrives.”

That’s because Reavie has embraced the old saw that the best offense is a good defense. At home in the scorching summer temperatures of Scottsdale he can’t replicate the firm greens and gnarly rough of Winged Foot so Reavie has focused on mitigating damage. “We key in on wedges and hitting precise distances,” he says. “If you miss the fairways at the U.S. Open, you’re not normally knocking it onto the green out of the rough. And so we will then pick wedge numbers that we will try to lay up to and have a good feel for those numbers.”

The long practice rounds early in the week of the U.S. Open are mostly about creating exit strategies.

“Most of our work isn’t on golf swing stuff,” Reavie says. “It’s on short-game work. It’s on putting. It’s like, ‘Okay, if I get it out of position on this hole, where can I make a par from?’ It’s figuring out a game plan on how to make the fewest bogeys and save as many pars as you can.”

Reavie is particularly looking forward to the U.S. Open as a golden opportunity to kickstart a new season; he is candid that equipment changes blunted his momentum in 2019-20. But he has found some form while practicing at home in the runup to Winged Foot, thanks in part to Blackburn’s fidelity to TrackMan and a putting machine that helped uncover a flaw that had crept into Reavie’s stroke.

“I would say we use a lot of technology to basically give feedback to Chez and then just to validate what we’re doing,” Blackburn says. “A lot of people are scared of technology. But I always say, ‘Look, it expedites the learning curve.’ And it holds us accountable. Me as the coach, I’m always trying to do my due diligence with all of my players. I get a bit frustrated when people say technology’s a bad thing. It’s really bad if you don’t understand how to use it. But if you’re competent with it, it can do amazing things to help the students, because it saves you having to say a lot. A lot of times people can feel and see things and that feedback to them is far superior to any words that I might give out to a player, particularly Chez.”

For all the different kind of work that goes into preparing for the U.S. Open, it’s ultimately up to Reavie to perform once he’s in the arena. Pebble Beach was a breakthrough because it proved that his regular game is good enough, and Reavie’s overall comfort level has increased as he has trod the boards year after year; this will be his eighth U.S. Open.

“I don’t get as awestruck now that it’s a U.S. Open,” he says. “I think I’ve learned how to mentally focus a little bit more. The first few years on Tour, the majors are so amazing. You get there and it’s like your head’s on a swivel, right? You’re taking it all in and you’re really not focusing on what you need to be focusing on to play good golf. I’ve been out there long enough now where, yes, it’s a U.S. Open and it’s great and it’s cool. But what’s really cool is going out and playing well in a U.S. Open.”