7 ways this Winged Foot rookie is prepping for the U.S. Open 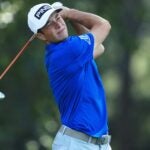 In Viktor Hovland's last U.S. Open appearance, he finished as the low amateur at T12.

This is the third installment in our five-part series, The Road to Winged Foot, powered by Cisco Webex, in which we’re highlighting how players, officials, broadcasters and others are preparing for the 2020 U.S. Open, set for next week at Winged Foot Golf Club in Mamaroneck, N.Y. Part I: Winged Foot Open champions on how to win there. Part II: A U.S. Open dark-horse.

It’s easy to forget Viktor Hovland has been a professional for only a year or so. Since he burst onto the PGA Tour last summer, the Norwegian by way of Oklahoma State quickly become a fan favorite with his earnest candor, sweet swing and beaming smile. And after playing his rookie season under some of the most bizarre circumstances imaginable, he will kick off his sophomore campaign at the U.S. Open at Winged Foot next week.

While it might seem surprising, when Hovland pegs it at Winged Foot, it will be his first U.S. Open as a professional. His last start as an amateur came at the 2019 U.S. Open, where he claimed low-amateur honors as he tied for 12th. And that’s not the only success the 22-year-old has seen in USGA events. He also claimed the 2018 U.S. Amateur title, earning him a host of exemptions and credibility as the next big thing in golf.

His success in those two USGA events have a commonality — both were conducted at Pebble Beach, a course Hovland also had played during his college career. When he heads to the New York metro area next week, he’ll be seeing Winged Foot for the first time.

Here are seven ways Hovland is prepping for his maiden voyage at mighty Winged Foot.

1. Get plenty of rest

The grind of professional golf is much different from that of the amateur game, so Hovland is making sure he gets plenty of zzz’s before heading to Winged Foot. Major championships are always more mentally and physically taxing than other events, but when the host course is Winged Foot, that toll ramps up to another level. The setup is expected to be one of the most challenging U.S. Open setups of the last decade. And maybe ever.

“I just came home from a three-week stretch,” Hovland said. “So, it’s a matter of kind of resting up a little bit. Just recharging the batteries.”

The margin for error is always thin in professional golf, but U.S. Open setups squeeze those margins so thin they can almost become invisible. Precision is essential or you will be punished — especially at Winged Foot. The rough will be thick and greens firm, so hitting your spots will be key. Proper ball striking will be an absolute must for a chance at victory, a fact Hovland is well aware of.

“As we know, you have to drive the ball really straight,” Hovland said. “Ball striking is really essential out there. [I’m] just doing [some] fine-tuning around my ball striking and hopefully we’ll be ready come next week.”

3. Mentally prep for par as a good score

Some Tour events quickly become shootouts as players feast on the soft and (relatively) easy setups. The U.S. Open will follow no such guidelines. Par is your friend in the U.S. Open, and even bogeys won’t hurt you too much. Hovland is ready for that sort of test, and said he enjoys the challenge that comes with that brand of golf.

“I think it’s very rewarding to play awesome golf and shoot one over or even par or one under,” Hovland said. “I thought Olympia Fields, which we played a couple weeks ago [at the BMW Championship], that was such an awesome test of golf. It was playing super difficult, but it was still fair. If you played well, you were shooting a good score.”

While there are some players who have played Winged Foot in the past, this will be Hovland’s first look at the A.W. Tillinghast design, but he doesn’t seem fazed. As long as he gets to play the course a couple times before the event, he feels comfortable attacking. And attack he will. Hovland said he plans to hit driver as much as possible to gain advantage over players who might approach tee shots in a more conservative manner.

“I’m pretty aggressive,” Hovland said. “It doesn’t really take me a whole lot of time to figure out what club I need to hit. I just pull driver and see how it goes. Then maybe make some adjustments after that.”

With scrambling around the green not a strength of Hovland’s, he plans to take a more measured approach into greens. But that doesn’t mean he won’t be attacking flags. He just has to aim in places that will keep his ball on the green within his dispersion pattern.

“I’m just placing my dispersion, where my pattern is, and finding a point where if I miss it left of my dispersion pattern, it’s still going to be on the green,” Hovland said. “And if I push it, it might be closer to the pin.”

Though it might be cliché, playing in a major championship requires tremendous patience. Hovland is, by his own admission, an impatient person, so he is trying to be mindful of that characteristic to keep himself from getting out of sorts.

“Everyone is going to hit bad shots,” Hovland said. “If you make a bogey with your bad shots, you’re bound to hit good shots … You don’t have to play that spectacular to shoot a good score, but you just can’t lose your head.”

It can be easy to outthink yourself on the golf course, so Hovland is trying to simplify as much as he can. He doesn’t like to have too many swing thoughts going through his head, so he will attempt to go out at Winged Foot and swing freely.

“If I’m playing really well, I try to not make it as complicated as it could be,” Hovland said. “A lot of it is just seeing shots and shaping shots.”

If he’s playing really well? Who knows, he might just find his name on the trophy.