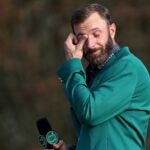 In 2020, Dustin Johnson was the man for the moment.

Ed. note: GOLF senior writer Alan Shipnuck is counting down the six most impactful and enduring stories from a golf year that was at once weird and wonderful, unnerving and uplifting.

Previously: The PGA Tour plays on | The young’uns are coming | Popov’s improbable rise

Dustin Johnson was the right man at the right time. As professional golf tried to regain its footing in a post-pandemic world, it didn’t need a star to drive the narrative — it needed a superhero. Enter DJ with his otherworldly physical gifts wrapped in a pleasing, unassuming manner that evokes Clark Kent knocking over cups of coffee in The Daily Planet newsroom.

Johnson won the third tournament of the restart, in Hartford, powered by an extraordinary 61 on Saturday. It was a welcome return by the game’s most prolific winner.

But the plot thickened in Johnson’s next start, the Memorial, when he signed for back-to-back 80s. The following week, at the 3M Open, he shot 78 and W/D’d. It was a reminder that for all of his supernatural accomplishments, Johnson is, in ways, as human as the rest of us.

Alas, the summer swoon was just a tease that set up a triumphant final act. Johnson stormed to the FedEx Cup by going first-second-first in the playoff events, and the lone defeat was as thrilling as the victories; DJ gutted a seemingly impossible do-or-die birdie putt on the 72nd hole only to be felled by Jon Rahm’s miraculous 66-foot bender in sudden death.

It was a long-overdue first FedEx Cup for a 36-year-old whose consistent excellence has a made him a perennial contender, but Johnson is such a generational talent his legacy was always going to be measured in majors, not points.

When DJ broke through at the 2016 U.S. Open, James Hahn offered a quote that speaks to the awe Johnson instills even in his colleagues: “You know the feeling when you’re an average golfer and you’re playing with a guy who’s on pace to break the course record and every part of his game is on fire and you don’t know whether or not to talk to him or just get out of his way? That’s what it feels like for any of us to play with Dustin right now.

“Every drive is hammered, every iron shot is dead at the flag, every putt looks like it’s going in. He looks like he’s going to shoot the course record every time he tees it up. And not only does the golf look different, it sounds different. The irons are so crisp. Off the driver head it sounds like gunfire. You only hear that once every decade or two. Tiger Woods when he was in his prime hit the ball like that. Rory has some of that. With Dustin it’s every swing. He’s a machine.”

And yet Johnson had not been able to build on the triumph at Oakmont, including another flummoxing near-miss at the 2020 PGA Championship. That’s what made his record-smashing victory at the Masters so satisfying, as DJ finally unleashed all of his want and will on a course that has always seemed tailor-made for his extravagant talents.

The dominant five-stroke victory capped a five-year run that all by itself is Hall of Fame-worthy: 16 wins including two majors, four WGCs, four playoff events and two Player of the Year awards. Johnson has now spent more time atop the World Ranking than any players besides Tiger Woods and Greg Norman. In a start-and-stop season, when the very notion of time became cloudy, one thing became crystal clear: Dustin Johnson is now a player for the ages.