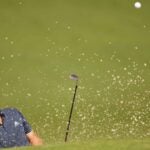 At long last, Dustin Johnson is a Masters champion.

DJ’s evolution from world top 10 to regular major championship contender, and once again from regular major championship contender to the Dustin Johnson of the last 12 months highlights the (at least partial) fulfillment of golf’s most limitless potential. Dustin Johnson has become not “one” of the world’s most talented players, but the world’s most talented player.

His driving is unthinkably dominant, his putting has become a strength, and perhaps most impressively, his short game now shows unexpectedly deft touch.

The best example of DJ’s refinement in the smaller portions of his game came on the 11th hole. All day, the 505-yard par-4 had given players fits. The green, guarded by water and unusually thick rough, was nearly unreachable for most, while the bailout right left nearly zero margin for error on the ensuing chip, lest you wind up in Rae’s Creek for your efforts to avoid Rae’s Creek.

Johnson hit a good, but not great bailout to the right of the hole, and faced a tricky chip shot over a bunker toward a back pin. The television cameras appeared to show miles of space on the green, but a closer look from Johnson’s vantage point showed a much smaller window for leaving a makable par.

It was the type of moment where a younger, less mature DJ might have run into serious trouble. But Sunday, Johnson hardly flinched, popping a picture perfect chip that nestled a mere three feet from the flagstick, where he’d make an easy par.

“The up and down on 11 was probably one of the biggest up and downs for sure,” he said after the round. “After that, I felt like I could breathe a little bit and had a really good stretch there at 13, 14 and a 15.”

A “really good stretch,” as Johnson defines it, looks like draining three consecutive birdies while holding the lead coming down the stretch of a major championship. Not too bad for a chip shot from a bailout area.

While Johnson (rightfully) earns the credit for his growth, his TaylorMade Milled Grind wedge deserves gold (or perhaps green?) marks for its Masters performance. ZTP raw grooves in Johnson’s Milled Grind cut deeper to provide better overall control, while CNC milling creates consistency throughout the lead edge and sole of the wedge.

TaylorMade’s HI-TOE wedge lineup has been expanded to include a full range of wedge lofts from 50° to 64°. Featuring full-face scoring lines in the 56° to 64° and standard scoring lines in the 50° to 54°, each HI-TOE wedge also has an expanded toe area to deliver high-spin performance whether you’re taking full swings on your approach or playing finesse shots around the green.
Buy Now

Every year, only one golfer lays claim to a Masters winning setup. And from that setup, a few clubs shine above the rest. Grab yourself a set of one of the true green jacket stars this weekend — Dustin Johnson’s Masters’ winning wedges — and maybe you’ll start plucking pars out of thin air, too.