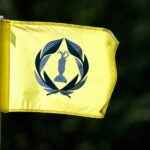 The Memorial Tournament announced a new title sponsor beginning in 2022.

After over a decade as the Memorial Tournament’s title sponsor, Nationwide will be taking on a new role at Jack Nicklaus’ annual invitational, beginning in 2022.

The Columbus, Ohio-based Fortune 100 company will remain involved with the tournament in a different capacity after next year with a multi-year agreement that involves Nationwide Children’s Hospital and tournament-week benefits, as well as a presenting sponsorship of the annual community fundraising event, the Legends Luncheon, which supports advances in pediatric care and research at Nationwide Children’s Hospital.

Check out the limited-edition Nicklaus collection Beginning in 2022, Workday will become the Memorial’s new title sponsor, marking the beginning of a 10-year agreement. Nationwide Children’s Hospital will remain a primary beneficiary of the tournament through an alliance with the Nicklaus Health Care Foundation, as will Eat. Learn. Play., the Oakland, California-based foundation designed to help ensure an equal road to success for all kids through nutrition, education and physical activity. Eat. Learn. Play. was established by NBA star Stephen Curry and his wife, Ayesha.

The Memorial Tournament was founded by Jack Nicklaus in 1976 and is held annually at Muirfield Village Golf Club in Dublin, Ohio. Since its inception, the Nationwide Children’s Hospital has benefitted from over $25 million in generated funds. The 2021 edition of the tournament will be played on May 31 – June 6.