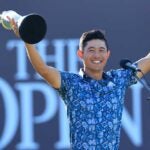 The newest Champion Golfer of the Year hoists the Claret Jug.

Collin Morikawa looked more humanitarian than he did pro golfer. As he stood in front of thousands as the newest Champion Golfer of the Year — the first crowned in the last two years — the 24-year-old spoke with incredible poise.

He congratulated the low amateur, Matthias Schmid. He praised the crowd. He thanked his family — he told them he loved them. He wished his caddie, who turned 39 on Sunday, a happy birthday. (The crowd joined in, bursting into song.) He spoke of fans returning, about giving thanks. Those fans, remember, weren’t at this first major win. Standing there on Sunday, in the warm English sunshine, Morikawa said he had chills.

Morikawa’s speech on the 18th green at Royal St. George’s lasted barely three minutes. No one’s suggesting it was the Gettysburg Address, but it was 180 seconds that reminded of the good in golf. There were no PIP plays, no trolling, no digs or quips. It was the kind of speech that surely drew nods of approval across the golf world, from the Royal & Ancient clubhouse to muni grill rooms.

Morikawa’s post-round presence was almost more impressive than his play. Almost. He went 31 holes without making a bogey. Everyone knows his ball-striking is the best on Tour — and it’s not close — but he didn’t three-putt once all week. When Jordan Spieth made back-to-back birdies on 13 and 14 to cut the lead to one, all Morikawa did was match his birdie on 14 by draining an even longer putt. Then, on 15, when it seemed like Morikawa was destined to finally drop a shot, he pitched out of the fescue and calmly rolled in a 10-foot par-saver to keep his momentum going. That kept the lead at two, and it never changed.

“I needed a break, and I didn’t get it from him,” Spieth said.

Morikawa, in golf’s first major after taking time off due to the pandemic, won the 2020 PGA Championship last year at a near-empty TPC Harding Park. He already has five Tour wins in 50 starts and two major victories in just eight appearances, and he’s now the first player to win twice in major debuts. He’s even thrown in a couple of major top 10s for good measure. His rise — he’ll now move to No. 3 in the world, behind only Dustin Johnson and Jon Rahm — brings to mind the way in which Spieth announced himself six years ago.

Spieth won his first two majors in his ninth and 10th major starts. He was 21 at the time — three years younger than Morikawa is now — but Spieth had a small head start, because he left Texas after one year, while Morikawa stayed at Cal for four years.

“At 24 years old, it’s so hard to look back at the two short years that I have been a pro and see what I’ve done because I want more,” Morikawa said. “I enjoy these moments and I love it, and I want to teach myself to embrace it a little more, maybe spend a few extra days and sit back and drink out of this. But I just want more. When you’re in these moments and you truly love what you do — which I love playing golf and competing against these guys — these are the best moments ever because the nerves push you to just be a better person.”

Spieth won his Open Championship — and earned his links-golf cred — at 23, a year younger than Morikawa. A young Spieth had game and proved it right away, sure, but he was (and still is) well-spoken, thoughtful and humble. Morikawa is of the same mold. On Sunday he showed a grittiness for which Spieth is known. The pressure never got to him, even with fans — lots of them — finally in attendance.

“I think what’s interesting with Collin, his other wins had come with little to no crowds, a few of his other wins, and then some with modified crowds,” Spieth said. “Then you step in to 35,000 and holding a lead down the stretch, I think is really impressive considering that’s a first — not only first Open Championship, but given the timing of when he’s been out here. He spent a year, year and a half of that in essentially a crowdless environment, and it’s harder. It’s harder with big crowds. You feel it more. You know where you are. It’s a bigger stage.”

Some players are wired for the moment.