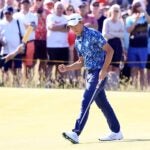 Collin Morikawa won the 2021 Open Championship to claim the second major title of his career.

And there are no signs of the 24-year-old star letting up anytime soon.

Morikawa used his elite ball-striking and rode a streaky putter on Sunday at the 149th Open Championship, closing with a four-under 66 to win the second major of his young career. He finished 15 under overall, besting Jordan Spieth (13 under), who chased him down the stretch and also signed for a 66. Jon Rahm and Louis Oosthuizen tied for third at 11 under.

One of golf’s brightest talents already has five PGA Tour victories, two of them majors and another a World Golf Championship. He’s projected to move from 4th to 3rd in the World Ranking, and he’s the first player ever to win two different majors in his first attempts. Now, he also has proof that his game travels.

“At 24 years old, it’s so hard to look back at the two short years that I have been a pro and see what I’ve done because I want more,” Morikawa said. “I enjoy these moments and I love it, and I want to teach myself to embrace it a little more, maybe spend a few extra days and sit back and drink out of this. But I just want more. When you’re in these moments and you truly love what you do — which I love playing golf and competing against these guys — these are the best moments ever.”

For Oosthuizen, it was yet another heartbreaking finish. The 54-hole leader has won one major but finished as the runner-up in six others, including this year’s PGA Championship and U.S. Open. Oosthuizen shot 71 and finished four back. Spieth has been in strong form since winning the Valero Texas Open in April and was looking for his first major title since his 2017 Open triumph at Royal Birkdale, some 300 miles northwest of Royal St. George’s.

One major stalwart set the tone early on Sunday. Brooks Koepka teed off 2 1/2 hours before the final pairing and moved to eight under by the time they teed off. He shot a five-under 65 to take the clubhouse lead at eight under, but with an Open Championship that has lacked its trademark gusty winds, it was unlikely to stand.

The first leaderboard shakeup among the top three contenders came on the 4th hole. After parring the first 3 holes, they all missed the par-4 4th green right and were left with tricky chips. Only Morikawa got up and down — it would become a theme of the day — canning a putt from about 10 feet, as Oosthuzien and Spieth made bogeys.

Spieth made another bogey on the par-3 6th when he couldn’t get up and down from a pot bunker, but he bounced back with an eagle on the 7th.

The par-5 7th, in fact, turned out to be a massive swing hole and set the table for the rest of the action.

Playing as the easiest hole on the course, Spieth and Conners both made eagles from the penultimate pairing to get to nine under and within two of the lead. Playing behind them, Morikawa had an easy chip and tap-in putt for birdie to get to 12 under, but Oosthuizen found trouble from the bunker. He thinned his third shot from the bunker over the green and into another pot bunker. From there, with a tricky stance up against the back wall, he left himself 50 feet for par. He two-putted and made bogey — one of just five bogeys made on the hole all day.

Morikawa exited the 7th with a two-shot lead over Oosthuizen, and then he stepped on the gas. He stuck an approach from 195 yards out on 8 to seven feet and made birdie, and he followed it by draining a big-breaking 15-footer on 9 for his third straight birdie and a three-shot lead.

Through 11, Morikawa stood at 14 under with Oosthuizen and Spieth both at 11 under, but it soon became a two-horse race. Spieth made back-to-back birdies on 13 and 14 to get within one, while Oosthuizen bogeyed 13 and fell four off the pace.

Spieth’s birdie on 14 got him to six under in his last eight holes and jolted the gallery, but Morikawa didn’t flinch. His approach into 14 didn’t stay on the top tier where the pin was located, but Morikawa rolled it back up the slope and sank it for birdie from about 20 feet anyway, pushing the lead back to two for good.

“The nerves are definitely up there. But you channel these nerves into excitement and energy, and that puts you away from like a fear factor into this is something I want,” Morikawa said. “So that’s how I look at it, especially as those last nine holes were coming in. Jordan was making birdies; I think Rahm was pushing; Louis had a birdie on 11, an amazing birdie. You can’t worry about the score. I had to worry about every shot. Can I execute every shot to the best of my ability? Some we did, some we didn’t, and then you move on. We can’t control what’s going to happen, what has happened. So I really looked at that as just focus on every shot, how do I see what is the best shot possible, and try and do my best from there.”

Morikawa never made a mistake. He didn’t make a bogey in his final 31 holes, and despite ranking 172nd in Strokes Gained: Putting for the season, no one putted better at The Open. Morikawa didn’t have a three-putt all week and made clutch ones all day on Sunday. He had a nifty up and down for par on 15 in which he holed a putt from about 15 feet, and he two-putted the last three holes for par. Spieth, after making back-to-back birdies on 13 and 14, missed birdie putts on 15 (from 20 feet), 16 (from 50 feet), 17 (from 10 feet) and 18 (30 feet).

“I just wasn’t extremely sharp with the putter this week,” Spieth said. “I was sharper than I was at Augusta, and it’s been a little bit kind of here and there this year. My bad weeks have been okay and my good weeks are really good, but I needed to put in a little bit of work trying to almost get a solid couple hundred to 500 putts in between yesterday’s finish to today’s round to think that I could go out and confidently go stroke enough to win.”

After Morikawa tapped in for par on the 72nd hole, he raised his arms and celebrated with the crowd. When he won the PGA at TPC Harding Park last year, no fans were allowed.