Cameron Champ honors his grandpa in a very personal way 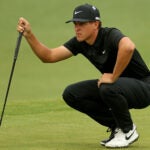 Cameron Champ lines up a putt during last week's Masters.

“Now others will get the chance in his name,” he tweeted.

On Thursday, the Cameron Champ Foundation and Chevron Corporation donated $40,000 to establish two scholarship funds for student-athletes on the men’s and women’s golf teams at Prairie View, a historically Black college and university in Texas. It follows a similar donation by the Augusta National Golf Club last week before the Masters. The Lee Elder Scholarship, named after the first Black man to play in the Masters, will be awarded to one man and one woman on the golf teams at Paine College, an HBCU in Augusta, Ga.

Cameron Champ said he was inspired by Elder and Augusta National, and, of course, his grandpa. The 25-year-old biracial pro’s first memories of golf, he has said, were of hitting through a palm tree in his grandfather’s backyard. During his victory at the Safeway Open in 2019, Cameron commuted to Sacramento — about an hour away — all week to spend more time with Mack, who would die a month later due to cancer. After the victory, on the 18th green, Cameron talked with Mack on a cellphone.

“My grandfather had such an incredible influence on my life and always inspired me in many ways,” Cameron Champ said through a Prairie View A&M release. “I’m so grateful for Pops introducing me to the game of golf, but also for teaching me that there’s so much more to life than golf. He always stressed the importance of giving back and paying it forward.

“Last week, Augusta National Golf Club Chairman Fred Ridley addressed how access and opportunities are still barriers to the game, and he hit the nail on the head when he said that the time to do more is now. That really sparked this idea, and I thought, what better way to honor PaPa Champ than to take up the challenge to do more, right now.”

The Cameron Champ Foundation’s work, the release said, is to improve education and access to golf in underserved and underrepresented communities.

“Mack Champ was born in Columbus, Texas, in a segregated neighborhood with limited resources. His determination to fight against systemic racism and discrimination fuels our work,” said Glenn Weckerlin, the Cameron Champ Foundation board chairman. “We recognize that the pandemic has disproportionately impacted communities of color and has placed a heavy burden on the university and its already stretched funding.

“We are thankful that we can collaborate with such a historic institution to provide deserving student-athletes from diverse backgrounds opportunities that they might not otherwise have. We are delighted to contribute to student dreams and hope our actions will inspire others to follow suit—the time is now.”