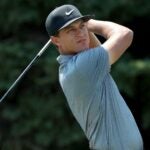 Cameron Champ hits a tee shot during the final round of the 3M Open.

BLAINE, Minn. — Cameron Champ was in the middle of his worst full season on the PGA Tour, and something needed to change. He decided it was him.

He needed to figure out how to manage his own expectations, how to manage his stress, how to manage being a husband. No, he said, it wasn’t technique that’s eluded him during a recent stretch rough stretch. He said it’s about maturing, getting his head right, finding a golf/life balance, deciding what’s truly important and sticking to it.

That’s why he has the names of his wife, Jessica, and grandfather, Mack “Pops” Champ, on his glove. It reminds him there’s more to life than golf. So when Champ ended this drought on Sunday at the 3M Open, he remembered how he got there, and what he thought about to help him get there.

When he bent down to line up his winning three-footer on the 18th green at TPC Twin Cites, he was really only thinking about one thing.

Champ was near-perfect on Sunday, winning the 3M Open with final-round five-under 66, good for a two-shot win over Louis Oosthuizen, Jhonattan Vegas and Charl Schwartzel, who tied for second at 13 under. He rode a hot putter all week, never made a bogey in the final round and closed with a gritty par when at first it looked like he was losing his cool on the 72nd hole.

“Now I’m married, now I have responsibilities, soon I want to start a family with my wife. Again, for me it’s more so realizing what I want to do in the game of golf, and then who I want to be at home,” Champ said. “It’s a balance you have to find, and if you don’t, it can really haunt you and it can cause a lot of issues. So I just feel like the last two months I’ve been in a lot better head space and kind of realizing what is truly important to me and what is not. I’ve just been sticking to it.”

It’s the third PGA Tour win for Champ and the first since the 2019 Safeway Open, an emotional victory that came as his grandfather, Pops, was in hospice care. Pops taught Cameron the game and Cameron called Pops his hero. He passed away about a month later at age 78.

But even after winning the Safeway, Champ’s game never really took off, at least not how he wanted. His world rank hit triple digits earlier this summer, the first time it’s been that high since the week before his Safeway win.

He entered this week with just 10 made cuts in 22 events and only one top 10. In a stretch from May to June, Champ missed four cuts and withdrew from the Memorial; in his last event of that span he shot 71-77 at the Rocket Mortgage Classic in Detroit, but followed it up with his best finish of 2021 with a T11 at the John Deere Classic two weeks ago.

“After Detroit I just took a step back and said, you know what, this is enough, I can’t keep going on this way, I’m not enjoying the game, it’s not fun, and in order for me to enjoy the game and for it to be fun, I have to be true to myself and who I truly am as a person,” Champ said. “That’s kind of how I’ve been on the course. You know, this week I really didn’t get mad at results. If I did get mad, it was more so what I was thinking before that shot and what caused me to hit that shot. So it’s definitely for me a way better perspective as far as how to get around the course.”

Cameron Tringale led the 3M Open after 54 holes but that didn’t mean much, not with a leaderboard so bunched and on a course with an unpredictable closing hole. Tringale started the day at 12 under, one ahead of Gary Woodland and Maverick McNealy and two ahead of eight others, a group that included Champ.

Champ, playing in the third-to-last pairing, made three front-nine birdies and turned in 32, birdied 11 and parred 12 to take the solo lead at 14 under. He stayed there for the rest of the back nine as contenders bounced up and down the leaderboard. Tringale birdied 11 and 12 but tripled 13. Vegas finished birdie-bogey-birdie. Eventually, Oosthuizen got in the clubhouse with a 66 and posted 13 under, as did two others, and Champ stepped to the 18th tee with a two-shot lead.

The par-5 18th at TPC Twin Cities had been feast or famine all week. It wraps around a pond that features a green that’s guarded by water short and right and bunkers left. It’s played host to heroics (Matthew Wolff won the 2019 3M Open with a walk-off eagle) and disasters (Sung Kang made a 12 on Saturday.)

It played as the 10th-hardest hole this week but was the toughest on Saturday, when the pin was tucked in the back and the wind picked up and it played to a scoring average of 5.486 — the highest on any par-5 in a single round this season. In total, 124 balls were put into the water on 18 this week, tied with the 15th at TPC Scottsdale in 2012 for the most on any hole on Tour dating back to 2003.

The hole is even harder when battling nerves, dehydration (which Champ said was an issue) and trying to win a golf tournament, but Champ never found water on 18. We went left. Way left. It found some of the longest grass on the course and he was forced to hack out, but his options were limited. He got it out but it stayed in the rough, and from there he advanced it 95 yards to the middle of the fairway.

He had 127 remaining and a gap wedge in his hands — and he stuck it. The ball spun back to within three feet. He had two putts to win, but he only needed one. Champ finished all four rounds with 29 putts or less and ranked first in Strokes Gained: Putting despite his season-long rank of 206th in that same category.

Walking off the green, as the crowd stood and applauded, Champ took off his hat and covered his face, keeping it there for a good five seconds.

“It was just emotion. I know this is the player I can be and again it’s allowing myself to be that player,” Champ said. “It has nothing to do with putting stats or driving stats or iron stats, none of that. It has to do with me allowing myself to be that player. Like I said again, I’m just in a lot better space with everything and enjoying myself and enjoying myself more at home. Again, for me, I’m the happiest I’ve ever been.”