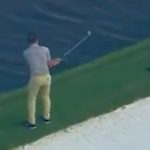 Cameron Champ takes a practice swing on Saturday in front of a gator on the 18th hole at TPC Louisiana.

Cameron Champ, after hitting his tee shot into the water on the 18th at TPC Louisiana, took a drop and hit again. His partner, Tony Finau, was long, straight and safe in Saturday’s best-ball portion of the Zurich Classic, but he wouldn’t play alone.

“You do everything you can to stay in the hole for your partner and try to build momentum for tomorrow,” analyst Dottie Pepper said on the CBS broadcast.

As Champ dropped, he had trouble in three directions. To his right was the water he had hit in. To his left was a bunker. Twenty feet behind him was a gator. In Louisiana, there’s more than fish and golf balls in the lakes. As Champ put his tee into the ground to mark where he’d drop, he took his first quick look back.

“A little friend behind him,” announcer Andrew Catalon said on the broadcast.

“Is the gator giving him a ruling?” analyst Nick Faldo said.

“That’s not a prop, I can promise you,” Pepper said.

Champ walked back to his bag and went over yardage with his caddie, then walked back and took his second quick look back. Champ dropped. He took his third quick look after picking up some dirt near the ball. Champ took a fourth look after going back to his bag to get a different club. He took a fifth after a practice swing. Champ stepped back to look at his target ahead and gave what lurked behind him a side-eye.

“He’s going on the assumption that he couldn’t care less about golfers, Dottie,” Faldo said on the broadcast.

“I’m sorry, how does that not get in your head when he’s right behind you,” Catalon said. “I mean, it has to.”

“I have to say for a delicate Englishman, I’d send my caddie down to just double-check for me,” Faldo said.

Champ hit, and his ball went 199 yards down the fairway. He’d pick up once Finau was home in two on the par-5.

Just how close was that gator, Cam?

“I think the alligator wanted a piece of him after he hit it in the water,” Finau said.