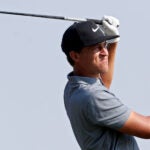 Cameron Champ hits his tee shot on Sunday on the 18th hole at TPC Twin Cities.

And analysts, for about a half-hour, picked him apart for it.

“That’s the big stick,” Frank Nobilo said on CBS’ broadcast of the 3M Open. “He doesn’t need it.”

Champ, during Sunday’s final round, came to the 567-yard, par-5 18th at TPC Twin Cities with a two-stroke lead. A par would win it. A bogey would very likely, too. To his left were trees. To his right was water that runs alongside most of the hole. In his bag were 2-irons that he had played successfully off the tee for most of the back nine.

In his hand was a driver that he hits at the third-longest distance on average on the PGA Tour.

Champ hit it well left and into ankle-high rough.

“Frank, I just don’t understand that play there,” Knost said. “I don’t know if he’s going to be able to lay that up in the fairway. He might go backwards.”

“That’s a head-scratcher,” Nobilo said. “I mean, he’s aiming down the left side, but unless he hits a big cut, it’s not finding the fairway. So when you consider his strategy over the previous eight holes …”

From 263 yards out, Champ would punch out with his second shot, narrowly missing a tree, then layed up short of trouble with his third. His fourth stroke was unquestionably great, a wedge that he hit to two and a half feet, which he finished off for his third career win.

Still, Nobilo, while congratulatory, said the driver “brought everything into play.”

“Brought the water into play,” he said. “So that was the first thought. He didn’t go right, but look what’s on the left — a pile of trees and rough and uncertainty really. Well, it panned out in the end, but he brought so much into play, and I know he’s got a long career ahead of him, but there’s a few things that he and [coach] Sean [Foley] will work on, couple decisions there, because one day, it’ll be a five to win in a situation like that. He won’t have the luxury.”

So why he’d do it? Afterward, Champ told announcer Amanda Balionis that “on 18, I’m going to hit driver there every time, no matter what.”

“It’s a very difficult driving hole for me, but again, it’s one of those holes where if I hit left over there, the majority of times I’m going to have a chance to punch out,” he said. “And the times I do hit the fairway, it will be an easy par-5 to get into.

“But obviously I kind of made it a little interesting there.”

Did he ever look at the leaderboard?

“I was, yeah,” Champ said. “But again, that was the plan we had all week, and I wasn’t going to change it, no matter what. I made a great approach there to save par, and that’s just sticking to my process and what we’re trying to do and just stick with it no matter what comes up.”

And what did Nobilo and announcer Dottie Pepper think of that explanation?

“Well, I respectfully disagree with it. I really do,” Nobilo said. “I think he’ll learn going forward. I don’t think you can put a plan into play on Wednesday for a situation that happened today, a two-shot lead. It wasn’t necessary. I think that’s why Tiger Woods was such a great closer.”

“I think he will go back and reevaluate,” Pepper said. “And no great player goes through a tournament without having to make flexibly confident decisions, to have another way to play. But I will go back to the course’s designer, Arnold Palmer. What did he say? You must play boldly to win.

“He played boldly to win. You got to give him that one.”