On the grounds, fans keep yelling ‘Brooksy’ at Bryson. What happens next? 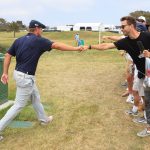 Bryson DeChambeau is in contention for his second straight U.S. Open title.

LA JOLLA, Calif. — As Brooks Koepka and his caddie Ricky Elliott walked down the grass chute from the range toward the first tee on Saturday, another figure appeared coming the other way: It was Bryson DeChambeau’s caddie, Tim Tucker, hauling his player’s bag toward the range.

Golf’s two beefiest boys have been on a collision course for weeks now. A leaked Golf Channel interview put Koepka’s long-held distaste for DeChambeau on full display. Ten million people watched the original video. Some awkward trash-talk ensued. Fans took sides. It was fun — Rory McIlroy called the pseudo-feud the “best thing ever” — but it left fans wanting more. Red Sox-Yankees wouldn’t be much of a rivalry, after all, if the two never actually squared off. This was a feud of contrasting styles. It needed some substance to go along with it.

Enter Saturday at the U.S. Open. Koepka and DeChambeau each began the day in the thick of contention, five shots off the lead. They weren’t paired together; Koepka was off at 11:56 and DeChambeau at 12:29. But they could square off on the leaderboard. In golf, that’s about as close to a showdown as you’re going to get.

If the feud really does run deep, it doesn’t seem to extend to the caddies.

“What’s up, boys?” Tucker barked in Koepka’s direction as they passed. “Have a day!”

He fist-bumped Elliott and both parties continued in their respective directions. Koepka rolled a few putts. Then made the walk down to the first tee, where the bleachers roared with approval. Koepka’s a popular golfer.

Koepka has become particularly popular with fans of Barstool, who continually scream “Let’s go Blake!” affectionately in his direction as he passes. (That’s an inside joke, the origin of which I can’t honestly remember.) Fans don’t generally trash-talk Koepka. He’s intimidating.

That’s not the case with DeChambeau, though, whose heckling began on the range pre-round. Some fans cheered when he started hitting driver, eager to see The Big Golfer go full throttle. But others jumped on him when he hooked a practice tee ball.

As he walked onto the first tee, the bleachers erupted. Mostly there were cheers, but there was a definite mix. As DeChambeau pulled out driver, a fire alarm at the adjacent hotel started going off.

It would be easy to dismiss the hecklers as outliers or overserved knuckleheads, but that would be ignoring what it’s actually like to be Bryson DeChambeau at a golf tournament. There’s far more positive than there is negative — but there’s plenty of both. DeChambeau elicits a response, one way or the other.

As the day progressed, both players began to climb the leaderboard. Koepka was even through 8 but made birdie at 9 and 10 to get to two under. DeChambeau birdied 1 and 6 to join him. The collision approached. A final-round pairing felt distinctly possible.

But their roads diverged as the day went along. Koepka faltered with bogeys at 12 and 15. DeChambeau stayed bogey-free and added a birdie at the par-5 13th. Suddenly he was three up on Koepka, who was battling just to stay on the leaderboard.

“At first I didn’t really know how to handle it,” DeChambeau said. He’s likely referring to the Memorial, where particularly aggressive fans were escorted out for yelling at him (and later promised free beer from Koepka). “You’re kind of thrown into a situation. But now I enjoy it. I think it’s great. You’ve got to embrace it. There’s going to be Team Bryson, Team Brooks out there, and hey, keep it up, I’m happy about it.”

It’s hard to tell if DeChambeau means that or if he’s been forced to grin and bear it. Either way, he doesn’t seem to have much of a choice. Lean in or the heckling gets worse.

“I’m excited that one day we can eventually get paired up and play together,” he added, taking things a step further. “It would be fun.”

I caught up with DeChambeau on his way to a characteristic post-round range session, after his official media scrum, to ask him again about dealing with “Brooksy.”

“Whenever they say something, you recognize the grand scheme of things, what they’re doing and what’s going on,” DeChambeau said. You almost play a little 3D chess with them, you know what’s going on. There’s an end game to all of this, but I won’t be talking about that anytime soon.”

If you can make sense of that last bit — that “end game” — you’re well ahead of me. Is there a match in the works? A pay-per-view showdown? Or is DeChambeau just searching for a resolution?

“You literally have to sit back and go, ‘Y’know, this is a good thing. This is a really good thing for the game of golf,'” he continued. It’s possible DeChambeau is trying to convince himself of that exact thing.

DeChambeau is keenly aware that he’s not universally beloved. But what does he think his approval rating is on course?

“I don’t even know. I hope it’s upwards of 75-25. That would be nice,” he said. “There was a lot of cheering and I really appreciate every bit of it; it’s fun when you’ve got the crowd behind you. And then even when people are saying other things it’s kind of cool to hit good shots and shut them up, so it’s fun.”

We’ve gotten this far, somehow, without mentioning the important bit. On Sunday, Brooks Koepka will tee off at 11:27 a.m. He begins his day at even par, five shots back of the lead. DeChambeau’s round begins at 12:33 p.m. and three under par, just two back. With 18 holes to go, that’s a heck of an advantage.

Koepka won this tournament in 2017 and 2018. DeChambeau won in 2020. As for 2021? They’ve already made the headlines. It’s time to see whether the hardware follows. And then to see where golf’s hottest feud goes from there.