Who will win this grueling U.S. Open? We rank the contenders at Torrey Pines 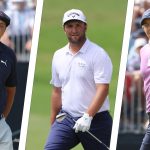 Bryson DeChambeau, Jon Rahm and Rory McIlroy will all begin the day multiple shots behind the lead at Torrey Pines.

What a leaderboard we have at the U.S. Open. Dicey. Delicious. Devilishly good!

Russell Henley, Mackenzie Hughes and Louis Oosthuizen are your 54-hole leaders at Torrey Pines. They have one career major championship to their names (Louie in 2010), but not in the last decade. And after them, a strong group of contenders sit in their wake.

To make things easier for you, the TV viewer, we have ranked the contenders in terms of how likely it is they will lift the trophy Sunday night. Does Scottie Scheffler have the same score as Jon Rahm? Yes. But that doesn’t mean he’s just as likely to get it done. At least not in this subjective column.

Nine months ago, DeChambeau began the final round of the 2020 U.S. Open two shots back. That’s exactly where he begins this year’s Open, although he’ll be doing it from the third-to-last group. He’ll have many more people to take down this year, but the same exact strategy is working again. Mash it a long way, make a bunch of putts and see if anyone can make as many birdies as you do.

Rahm has been in comfortable control of his game all week long, doing everything well. Will it be enough? He’ll have to probably shoot 68 or better to get it done, and he hasn’t even done that once this week. So how is he rated second in this ranking? He’s probably the best golfer in the world right now, and he’s posted a victorious clubhouse lead at Torrey in the past. The vibes are out there.

Is Rory actually in contention yet? Does he feel like he’s in contention? It’s been a long time since he was this close to the lead in a major on Sunday. He hasn’t delivered. But something feels different this week. It’s a Tour course he’s fared well at, after all. That hard-working bogey on the 15th today showed that Rory isn’t letting one bad swing kill his chances.

You know who doesn’t make bad swings? King Louis. He just lingers, like he did Saturday, never far from the lead, but never out in front all alone. And then wham! He drops in an eagle like he did Saturday evening. Can he actually fend off everyone Sunday? He’ll have to play well to do it. There are too many contenders.

You may have missed DJ’s third round, mainly because not many shots were shown on TV, but also because it happened pretty early in the day. Johnson has had a quiet week, but there are only so many people capable of shooting 64, and he’s one of them.

Morikawa is another player who could shoot 64 on Sunday. He is the best ball-striker on the planet, after all. Morikawa with irons is the closest thing we’ve seen to Tiger Woods’ irons game in a modern player. Could he hit it tight all Sunday long? He could. Eighteen holes is a pretty small sample size.

It would be a pretty Hollywood finish for the young kid to return to the big show after getting his mind right and win the freakin’ U.S. Open. But similar to DeChambeau, it’s no surprise he’s playing well here. His vertical swing gets him out of trouble. He hammers it a long way. And as we saw in his eight-birdie first round, he can clearly go low.

Henley has basically led this entire tournament. In the quietest way. He has never contended in a major, but he has shown up in some big moments during his Tour career. He stared down McIlroy en route to winning the 2014 Honda Classic. He may have to do it again Sunday evening.

Poll the golf industry and Scheffler is the kind of player many expect to win a major one day. He’s succeeded at every level. He can dismantle courses. But this would be his first Tour win. It may be a bit too much too soon for young Scottie.

The affable Canadian will play in the final pairing at a major for the first time in his career. His best major finish is a T40 at the Masters earlier this year, which is about the equivalent of a T60 everywhere else. Everyone else will be in front of him on Sunday. That’s a lot to think about.

Brooks Koepka is just five shots back. Could he do it? Justin Thomas is just five back, too. Same for Paul Casey, Francesco Molinari, Ian Poulter and Sungjae Im. These are all winners, but there’s a distinct reason each of them are five back. They haven’t pegged it all that well! Could they do it? Of course. But when none of them come close, it won’t be a surprise.