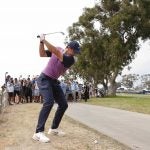 Rory McIlroy played it smart on No. 15 on Saturday at Torrey Pines, a reminder he's taking the long view this week.

LA JOLLA, Calif. — Every day this week, Rory McIlroy has ordered the same thing to his room at the Torrey Pines Lodge: rotisserie chicken, avocado, sun-dried tomatoes and garlic aioli on whole wheat.

Such is the thrilling life of a top professional golfer. On Sunday, McIlroy will contend for a U.S. Open title and $2.25 million. On Saturday, he was keenly focused on the mundane details of staying sharp and preparing — mentally, physically and nutritionally — for another round.

If food was on the mind, that’s because McIlroy came off the course feeling hungry. He’d begun the day just inside the top 20 at one over par and teed off at 11:34 a.m., in the limbo between early and late groups. Too early for lunch, too late for breakfast.

“Now I’m starving,” he said post-round. No wonder he had chicken on the mind.

It would be too clunky to point out that McIlroy also hungers for something that no sandwich can satisfy, but let’s do it anyway. McIlroy wants to win this U.S. Open. He wants it desperately. He’s been among the best golfers in the world for more than a decade but hasn’t won a major championship since 2014. He’s won only one U.S. Open. Saturday was the 10-year anniversary of that victory.

He’s tried nearly every version of major championship prep since then. He’s tried treating majors like any other tournament. He’s tried to ramp up his game to specifically peak for them, too. It’s no secret how much McIlroy admires Brooks Koepka’s ability to rise to the occasion during golf’s biggest weeks, but McIlroy has had trouble bottling the same level of success.

This week, though, McIlroy seems to be zooming in, wholly embracing the idea that winning something as monumental as golf’s American national championship requires above all else patience and attention to detail. The little things add up to a big thing, if you get them right.

“You don’t have to do anything flashy,” McIlroy said, anticipating his Sunday to come. “I’ll take boring all day at a U.S. Open.”

It’s remarkably similar to something Koepka said after his opening round.

“It’s a lot simpler than what guys make it,” Koepka said of tackling a U.S. Open setup. “I think a lot of guys make it more difficult than it needs to be. You’ve just got to understand where the flag is, what you’re doing and where to miss it.”

On Saturday, McIlroy boringed his way right into contention, shooting a five-birdie 67 that catapulted him into a share of fourth place, just two shots off the lead.

McIlroy began his day at one over, six off the lead. But he plodded along, hammering fairways and greens, playing the long game. He made birdie at No. 2 and parred the other eight holes on the front.

“I just stayed really patient knowing that, if you’re not making bogeys out there, you’re not losing ground,” he said.

Things got much more exciting on the back side. McIlroy hit one close on 10 and rolled in a six-footer to get into red figures. He hit an even better shot at the par-3 11th, where he stuck a long iron inside 10 feet but just missed the putt. But he more than made up for that miss with a high flop shot from the rough on 12 that came off a slope just right of the flagstick and trickled into the dead center of the hole.

McIlroy wasn’t done. The very next hole was the par-5 13th, which was reachable with the tee pushed forward on Saturday. McIlroy hit his tee shot down the middle and then pulled a fairway wood from 260 yards and hit what his caddie Harry Diamond called the best shot he hit all year. His ball flew on a dead line at the hole and crashed into the flagstick, caroming off to the right edge of the green. McIlroy two-putted from there for a third birdie in four holes. The chase was officially on.

McIlroy’s only true misstep came on the 15th tee, where he hit a massive double-cross with driver, sending his ball so far left it ended up down a ravine. TV cameras captured a massive rattlesnake in the vicinity. One reporter asked McIlroy if he’d considering venturing down to play the ball.

Instead, McIlroy dropped, roped a long iron near the front of the green and got up and down for a terrific bogey. It may be the save that ends up winning him the title.

“This is the only tournament in the world where you fist-pump a bogey,” he said with a grin.

McIlroy got up-and-down from a greenside bunker at 16. He played to the fat part of the green and two-putted for par at 17. He added a final birdie at No. 18, where he deftly navigated a two-putt from the back right portion of the green. He looked up toward his room at the adjacent Lodge. His wife Erica was sitting out on the balcony, taking in the action.

One more “boring” round and McIlroy might just end up with a thrilling scene on the same green come Sunday. Meantime, it’s back to that room. Dinnertime. Bath time. And dreams of a U.S. Open trophy.