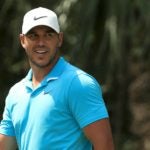 Brooks Koepka closed with a 65 to finish in the top 10.

Brooks Koepka has no problem speaking his mind and has zero issues when it comes to trading jabs with golf analysts. He’s had a long-running spat with Golf Channel’s Brandel Chamblee, but now it looks like there’s another commentator he’s butting heads with: Sir Nick Faldo.

First, let’s set the stage. This all began on Thursday, when Koepka opened the RBC Heritage with a 67 and was asked afterwards, among other things, his stance on players being mic’d up on the golf course.

“I don’t understand why they want us to wear a mic when there’s a boom mic that stands 10 feet away from every shot that I hit,” he said. “If the announcers would just shut up and listen, you could hear every word that we’re talking about. I don’t understand what the thing is. Half the time the lady’s holding a boom mic, and she’s listening to everything we’re saying all the way down. If they would just shut up, they could hear everything.”

Apparently the “shut up and listen” recommendation made its way to this week’s CBS Sports crew, and Faldo addressed it during Koepka’s tee shot on 18 on Friday.

“He told we announcers to shut up; let’s see here what he has to say about that one,” said Faldo, speaking as Koepka’s ball reached its apex before landing softly on the fairway. What followed was seven seconds of silence, as the ball rolled out and the camera went back to Koepka, who mouthed a few inaudible words to his caddie. Then Faldo hit his punchline: “Yeah, fascinating stuff.”

Faldo’s rebuttal got back to Koepka, who then spent part of Sunday’s lengthy weather delay quote tweeting the PGA Tour’s video of his eagle on the par-4 9th hole earlier in the day. “Fascinating stuff out there…” he said.

Koepka added a parting thought — or final jab — after his round, a 65 that was good enough for a solo 7th and four behind winner Webb Simpson.