Final round of RBC Heritage suspended due to dangerous weather 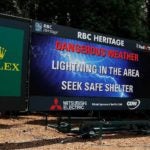 Play was suspended on Sunday at the RBC Heritage.

UPDATE: The PGA Tour announced the final round of the RBC Heritage will resume at 5:20 p.m. ET.

The final round of the RBC Heritage was suspended shortly after the final pairings teed off on Sunday.

Due to dangerous weather entering Hilton Head Island, S.C., play was suspended at Harbour Town at 2:35 p.m. ET and players were removed from the course.

According to radar, the blip of rough weather doesn’t appear it will stay for long, and players are expected to return to the course. Whether everyone finishes depends on exactly what time that is and how much daylight remains. Sunset on Hilton Head Island is 8:33 p.m. tonight.

Webb Simpson, Abraham Ancer, Tyrrell Hatton and Ryan Palmer were all tied at 15 under after 54 holes, and Dylan Frittelli is the clubhouse leader after firing 62 on Sunday morning. He’s at 17 under, tied with Justin Thomas, who has a birdie putt on the 17th hole when play resumes. You can view the leaderboard here.