‘Felt like a U.S. Open’: Here’s how hard the BMW Championship is playing 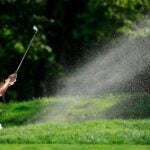 Tony Finau blasts out of a bunker at No. 12 at Olympia Fields on Thursday.

Just how difficult is Olympia Fields playing for this week’s BMW Championship?

“I’ve played two U.S. Opens so far, so I don’t have a ton of experience, but it felt like that a lot,” Tyler Duncan said after the round. “It’s firm and fast, and the rough is long. That’s about all you want.”

And he’s in second place!

I should add that it’s not just the sort of golf Tyler Duncan wants — it’s the sort of golf us viewers at home want, too. As fun as it is to see the best in the world torch a typical Tour setup, it’s even more fun to watch them battle rock-hard greens and thick rough, and to do their best to negotiate major championship-level conditions.

Thursday’s opening round served as a stark contrast to last week at TPC Boston, where Scottie Scheffler shot 59 and Dustin Johnson shot 60 in the same round. If anybody breaks 60 this week in Chicago, I’ll eat my Live Under Par-branded hat. Here are five numbers that show off just how difficult Olympia Fields played.

As in, the number of golfers under par after one round at Olympia Fields. Hideki Matsuyama shot 3-under 67. Tyler Duncan shot 2-under 68. Mackenzie Hughes shot 1-under 69. That was it.

“The greens were firm and playing really tough,” Matsuyama said. He’s right. “It was awesome. It was a grind,” said Duncan. Awesome for him, at least. “The golf course is playing fantastic. I think it’s a really great test of golf,” said Hughes. It’s particularly easy to like a test when you get an A. Respect to those three. As for the rest of the field …

The scoring average on the par-70 layout was just shy of three shots over par. That’s interesting because it’s a high number, for starters (remember, these are the best golfers in the world!) but also because Olympia Fields has hosted major championships in the not-so-distant past. In 2003, when the U.S. Open came to town, the first-round scoring average was actually slightly lower: 72.684.

“The greens were firming up yesterday in the practice round, but that felt like Saturday at the U.S. Open out there rather than Thursday at a PGA Tour event,” Rory McIlroy said after an even-par 70.

Score, relative to par, of the entire field on Thursday’s round. (Alternatively, the likely score of your foursome if you tackled the same course in today’s conditions …) Seem like a high number for just 70 players? Here’s another number for comparison: The field played last week’s first round in 204 under par. That’s a 399-shot swing!

Dustin Johnson shot 30 under last week. After his 71 on Thursday, one reporter pointed out that he could shoot 60-60-60 and still not reach 30-under this week.

Yes you would, D.J. By a whole bunch.

That would be the scoring average of the hardest hole on the course on Thursday — interestingly, the 510-yard par-4 finisher. It’s fascinating to have the final hole on a golf course play essentially as a half-par, and it means there should be no lack of drama come Sunday afternoon if the leaderboard is bunched (more on that in a bit).

On Thursday, more players made double-bogey on 18 (five) than birdie (four) and the finishing hole played just a tenth of a stroke easier than the par-5 first hole, which averaged 4.609.

“I felt like I didn’t do a very good job of when I was out of position to just take kind of the punishment and get back in play,” said Viktor Hovland, who got aggressive from a fairway bunker on 18, found the water and made double. “I kind of tried to force a couple situations, so it cost me a couple shots there.”

All good for Hovland, though, who finished up at even-par 70. He’s right in the mix. Which leads us to …

That is, 68 out of 69 players who are currently within 10 shots of the lead. I realize it’s been only one round, so it’s hard for the field to spread out too much, but still — besides Mark Leishman, who posted 80, every player in the field shot a score between 67 (Matsuyama) and 77 (Cameron Champ, Sungjae Im, Andrew Landry and Maverick McNealy). That means, as hard as it was to go low, it was a decidedly fair test, too, without gimmicks or gratuitous punishment. It also means we’re likely to see a bunched leaderboard heading to the weekend.

On that note, we’ll give Dustin Johnson the final word: