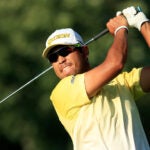 The leader is 3-under. Last week, 3-under would have made the cut by a stroke. Olympia Fields was playing Herculean. Here are three things you should know after Thursday’s first round of the BMW Championship just outside of Chicago, the second event in the FedEx Cup playoffs.

Three golfers broke par. Two golfers were better than 1-under. One by a stroke. The other by two.

Hideki Matsuyama shot a 3-under 67 to grab a one-shot lead over Tyler Duncan and a two-stroke lead over Mackenzie Hughes. Another 10 golfers were at even-par 70 and three  shots back of the lead.

Matsuyama made six birdies, including one on the 18th after a 66-foot putt.

“I’m not sure really what I had going today, but that last putt, that long putt that went in, very happy with that one, so we’ll remember that one,” he said.

Duncan birdied his first two holes and made that hold up, as he bogeyed the 12th and birdied the 14th.

“It was awesome,” he said. “It was a grind. I drove it well and scrambled well, and those were, I think, the two biggest factors that I thought were going to – you were going to need to perform well at to have success this week.”

Tiger Woods is six shots back

Tiger Woods was even-par through his first 15 holes. He was contending.

He was 3-over over his last three. He was collapsing.

Woods’ bogey-bogey-bogey finish put him tied for 35th and six shots off the lead.

“The course was fine. The course is in perfect shape,” Woods said. “Not the way I wanted to finish, but the golf course is playing difficult for sure.”