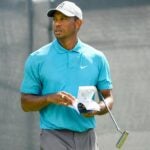 Tiger Woods shot a 3-over 73 on Thursday at the BMW Championship.

Tiger Woods faced a number of questions entering this week at the BMW Championship. Could he find some magic with a putter that has gone cold? Could he play well in U.S. Open-like conditions at brutish Olympia Fields? Could he work his way into contention in Chicago, giving himself a chance to return to the Tour Championship?

Through one round, the answer to all three questions was … kind of. Woods made bogey on each of his final three holes to post an opening 3-over 73 that left him in the middle of the pack at the BMW on a day where just a handful of players got around in red figures.

Woods’ putter had its moments on Thursday, particularly on No. 14, where he made a 28-footer for birdie. But he three-putted twice, struggled with his speed and shorted a 10-footer on his final hole of the day, no doubt leaving a frustrating taste in his mouth after battling near the lead for his first 15 holes.

Woods hit just six of 14 fairways, which was less than ideal given Olympia Fields’ punishing rough. He acquitted himself fairly well from there — his 12 greens in regulation was an impressive number, given the conditions — but still sat just T40 at the time of his finish. According to DataGolf, Woods has just a 5 percent chance of advancing to East Lake.

On Wednesday night, however, another question emerged: What would Woods say about the conversation that had overtaken the sports world? That had led to a player strike in the NBA and player-led cancelations across the MLB, MLS, WNBA, WTA and more following the shooting of Jacob Blake in Kenosha, Wisc. on Sunday?

That’s the sort of question Woods is far less accustomed to answering than any asked on the golf course. Here’s what he said following his round about the possibility of the PGA Tour delaying or canceling this week’s tournament.

“No, I talked to the commissioner and they were on board. Obviously he released his statement, and all the guys were on board. So no, obviously there was talk about it because of obviously what happened, but we’re all on board, on the same page.”

Read into that what you will — Woods was hardly verbose following his round — but the question of whether “there was talk about it” refers to the protests in general or the idea of the PGA Tour shifting its schedule is still open. Woods declined to talk to Golf Channel after the round.

The MLB, MLS, NBA, WNBA and WTA protests are player-led, peaceful, powerful ways to use their respective platforms to bring about the urgent need for change in our country. There have been a number of efforts in the past to send a message that the current climate is unacceptable, and these teams, leagues and players now taking this step will help draw further attention to the issues that really matter. The PGA Tour supports them — and any of our own members — standing up for issues they believe in.

The PGA Tour made a pledge over the summer to be part of the solution, and we have been actively working to make deeper and more specific commitments to racial equity and inclusion in the communities where we play, as well as supporting national organizations within this movement that we had not previously engaged with. However, we understand that now is not the appropriate time to highlight our programs and policies, but rather to express our outrage at the injustice that remains prevalent in our country.

Sports have always had the power to inspire and unify, and we remain hopeful that together, we will achieve change.

On the course, Woods said he didn’t mind the heat (“Well, I live in Florida, so it’s hot. This is no different”) nor the challenging conditions (“The course is in perfect shape”) but was understandably displeased with his finish.

Still, he’s hardly out of the tournament. With just a few groups left on the course, only three players were under par, which means one strong round could put him right back in the mix.

Woods will tee off at 2:09 p.m. ET (1:09 p.m. local time) on Friday at Olympia Fields, once again alongside Bubba Watson and Carlos Ortiz.