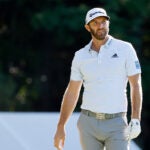 Dustin Johnson raced to the top of the leaderboard thanks to a crazy-low front nine Friday.

Thanks to an incredible start for Johnson on the front side at TPC Boston, he broke the record of 28 on the front nine at the Northern Trust. The event changes its host course every year, so that stat can be misleading but the point remains: DJ was hot.

The 27 strokes he took early Friday afternoon added up to a nine-under score as he made the turn, vaulting him into a tie for the lead with Scottie Scheffler at the time. It included five birdies, two eagles and two pars. Simple and smooth from DJ.

The first eagle was an absolute bomb — a 41-footer — on the 2nd hole, while the second was a bit easier. DJ drove the green on the 4th hole to just five feet, which he cleaned up to reach six under through four holes.

He then added two more birdies to start his back nine — 11 under after 11 holes on the day — to grab the solo lead. He needed just a 32 on the back nine to shoot the second 59 of the day (Scottie Scheffler carded a 59 in the morning wave) but closed his round with seven straight pars for an 11-under 60. Still, that’s good enough for the clubhouse lead (15 under), and will likely still be when Friday’s play is over.