BMW Championship expert picks: Who our staff thinks will win 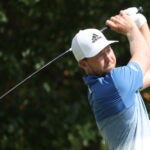 Daniel Berger tees off on the 4th hole at TPC Boston on Sunday.

Seventy golfers are playing in this week’s BMW Championship. The FedEx Cup playoffs shrink the fields. They shrink the number of players who can win.

They grow your chances of winning.

The betting is now a little easier.

You know what to do. Gambling speaking.

The BMW is being played at Olympia Fields Country Club in Olympia Fields, Ill. Last week, our Jonathan Wall and Sean Zak both picked Dustin Johnson to win. We’ll give the floor to Wall. Who does he like this week?

“Berger is being priced alongside the game’s elite — and rightfully so,” Wall wrote. ”Throw out the missed cut at the Memorial, and he’s finished no worse than T13 in five starts since the restart. That includes a win and three top-3 finishes. He’s on a heater.”

To-win: Bryson DeChambeau, +1,500. We know he’s comfortable on the course by virtue of his U.S. Amateaur victory back in 2015, and that’s more than we can say for most of the other players in the field. Plus, his putting is currently in great shape — a huge necessity on Olympia Fields’ greens.

Top 10: Kevin Kisner, +450. Kiz has been playing awesome, with three top 4 finishes since July. He’s also one of the best putters on Tour, so this seems like a solid bet this week.

Prop: Top 20, Matthew Wolff, +188. At No. 33 in the standings, Wolff is on the bubble to get into next week’s Tour Championship, so I’m counting on some gritty good play to ensure himself a spot in the field at East Lake.

To-win: Matthew Wolff, +4,500. You need some pop to play Olympia Fields, and Wolff has that.

Prop: Leader after Round 1, Matthew Wolff, +4,000. I usually like to spread the money around, but I’ll give this a shot this week.

To-win: Justin Thomas, +1,200. I feel like JT rises to the occasion whenever any other top player plays like DJ did. Bounce back for JT.

To-win: Daniel Berger, +1,800. Berger is being priced alongside the game’s elite — and rightfully so. Throw out the missed cut at the Memorial, and he’s finished no worse than T13 in five starts since the restart. That includes a win and three top-3 finishes. He’s on a heater.

Prop: To be decided by a three-man playoff, yes, +1,600. Total dart throw. Believe we’re due for some extra holes on Sunday.

To-win: Tony Finau, +4,500. These odds are too good for me to pass up with as well as Finau’s played this year.

Top 10: Joel Dahmen, +1,000. After missing the Northern Trust cut, Dahmen went out and found a local money game over the weekend. He put it out there on Twitter for the golf world to see. I view that match as motivation for Dahmen to get back on track with the big boys this week.

To-win: Daniel Berger, +1,800. Nothing like a good, old-fashioned vengeance pick to win. Also, Berger is literally allergic to finishing outside the top 25.

Top 10: Jon Rahm, +125. These odds reflect a near-lock, and that’s exactly what Rahm is to top-10 at the BMW. He’s a good player who’s playing good golf — don’t make things more complicated than they have to be.

Prop: Top past champion, Justin Thomas, +275. Based on recent performance, Dustin Johnson is the only threat to JT among the group, and I’m banking on a regression to the mean for DJ at the BMW.

To-win: Dustin Johnson, +850. Why overthink it? DJ is the hottest golfer on the planet. He wins.

Top 10: Xander Schauffele, +200. Part of me thinks, why would anyone not take Dustin Johnson, given the demolition act we just witnessed? Answer: The odds are terrible. So I’ll go a little further down the list for a Steady Eddy player who so often finds himself in the conversation at the big events.

Prop: Top American player, Dustin Johnson, +650. I picked him to win. By definition, that means I think he’ll be the top American as well.

To-win: Daniel Berger, +1,800. Berger has been playing absolutely lights out recently. I mean, he lost to DJ by only 12 shots last week in his solo third finish! But seriously, Berger will probably win this week.

Top 10: Viktor Hovland, +350. Hovland has been a bit quiet the past few weeks with mediocre finishes, but that’s not going to last much longer. I like a backdoor top-10 finish from Hovland this week.

Prop: To be decided by a playoff, yes, +400. I took this last week, too. Obviously, it didn’t hit. I’m probably going to keep taking this one until it hits because I like the value here.

To-win: Bryson DeChambeau, +1,500. Beefy Bryson at the course where he won the U.S. Amateur in 2015? Sign me up. He might be 40-plus pounds heavier than he was back in the day, but the good vibes should still be flowing.

Prop: Winner to play in final first tee grouping in Round 4, no, +210. I’m just throwing darts at the board on this one. There’s no rationale. I just have a feeling.

To-win: Daniel Berger, +1,800. He’s one of the hottest players in golf, and he’s even more motivated knowing he can’t even get into the November Masters. Here’s another chance to prove he belongs and add to his resume before Augusta (although, alas, it still won’t get him in).

Prop: Top past champion, Dustin Johnson, +225. Would you bet against this guy after what you saw last week?

To-win: Viktor Hovland, +4,500. Hasn’t missed a cut since early March and seems to be getting better by the week. Also has strong college reps on this track.

Top 10: Jason Day, +300. Missed cut in Boston, but four straight top-10s before that. He’ll continue to get tasty odds until he wins again.

To-win: Bryson DeChambeau, +1,500. Hopefully he got some extra rest after that MC and he’ll be back ready to overpower the Midwest.

Prop: Top 4 American, Cameron Champ, +1,400. If I’m going to go broke playing this game, I’m gonna do it in style. Champ should have a strong week.

To-win: Scottie Scheffler, +3,000. The guy shot 59 last week and has been one of the best players in golf over the past month. This guy has a win coming, and soon.

Prop: Top European player, Tyrrell Hatton, +600. His form hasn’t quite hit the heights as before the PGA Tour’s break. But nevertheless, he finished in the Top 25 last week, and his ball-striking remains steadfastly consistent. Solid odds for a good player who, ultimately, has to beat only six other players.