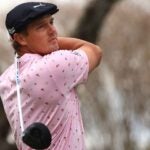 Bryson DeChambeau's big drives were once again at the center of attention at the Arnold Palmer Invitational Saturday.

We’ve reached the final round at the 2021 Arnold Palmer Invitational. Below is everything you need to know to watch the tournament’s final round at Bay Hill Sunday, including broadcast, streaming and tee time information.

Bryson DeChambeau was the story of the day on Saturday in golf. The big-swinging 27-year-old wowed the golf world when he blasted a 370-yard drive over the lake on No. 6 at Bay Hill, the famed par-5 where John Daly once made an 18. DeChambeau elected not to attempt the miraculous feat of driving the green — an apparent 350-yard carry — but his drive might have had the juice to get there, had he so chosen.

DeChambeau is one stroke off the 54-hole lead, trailing only Lee Westwood (-11) atop the leaderboard. On Sunday, Westwood will look to stave off a series of big names — including DeChambeau, Tommy Fleetwood and Rory McIlroy — as he attempts to seal his first PGA Tour win in a decade.

Elsewhere, Jordan Spieth recorded a very Jordan Spieth third round Saturday, making ace and hooking his ensuing tee shot into the water on consecutive swings. Spieth enters Sunday at the Arnold Palmer Invitational at nine under, two strokes off Westwood’s lead and firmly in the hunt for his first victory since 2017.

How to watch the Arnold Palmer Invitational on TV

With a cable subscription, you can watch the 2021 Arnold Palmer Invitational on Golf Channel and NBC.

How to watch the Arnold Palmer Invitational online, streaming

You can stream the final round of the 2021 Arnold Palmer Invitational in various ways. You can watch the Golf Channel coverage at golfchannel.com/watch and NBC broadcasts at nbc.com/live by logging in with your cable credentials. Another way to catch the action is with PGA Tour Live, which also includes featured group coverage, though you’ll need a subscription to access the stream.

In addition, fans can watch featured hole coverage on Sunday via ESPN+.

How to bet on the Arnold Palmer Invitational — risk-free!