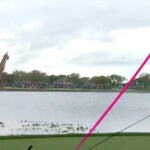 Bryson DeChambeau was discussing distance in an interview with GOLF.com back in January, and he got to the par-5 6th at Bay Hill. He didn’t want to hit a short wedge with his second shot. He wanted to hit his putter. The hole is a 531-yard par-5, but it doglegs left around a lake, and the green, theoretically, could be hit with about a 340-yard carry off the tee.

“If I play this year I will definitely do it,” DeChambeau said. “Number six at Bay Hill is one of those I’ve been eyeing. I think I can do some pretty cool things on it.”

DeChambeau, during Saturday’s third round of the Arnold Palmer Invitational, took a near-direct line at the hole and bombed his ball about 70 yards short of the hole before it bounced into the right rough, 370 yards from the tee. He raised both arms into the air. Twice. His ball carried 344 yards, according to the NBC broadcast — which may have driven the green had DeChambeau taken a straight shot at it.

“He can redefine the sport if he keeps this up,” analyst Paul Azinger said on the broadcast. “That flew so far.”

During the first two rounds, DeChambeau had declined the shot because of the wind. When he got to the hole on Saturday, after a small talk with his caddie, Tim Tucker, DeChambeau pulled his driver out of his bag and removed the head cover, and the gallery around the tee box cheered.

“This is what makes him the most interesting player in the game today,” Azinger said on the broadcast.

DeChambeau, after two practice swings behind the ball, a deep exhale and a few waggles of his driver next to the ball, swung. The crowd cheered at contact. DeChambeau pointed both of his arms into the air and shouted, “Go!” He bent over to watch it clear, and when it did, he raised his arms again and yelled. DeChambeau fist-bumped playing partner Lanto Griffin, then Tucker, who would hand him a protein shake.

A hole ahead, Jordan Spieth stopped his walk up the 7th fairway and looked back. He pointed over and laughed with his caddie, Micheal Greller. Spieth was near the top of the leaderboard and seeking his first win since 2017, but he’d be damned if he didn’t take at least a quick peek at a guy trying to drive a par-5.

DeChambeau would pitch short of the green with his second shot, and he two-putted from there for a birdie. He’d finish with a four-under 68, and he is one shot behind leader Lee Westwood.

“No one is having more fun than DeChambeau,” announcer Dan Hicks said on the broadcast after the tee shot. “Did you see what he did? Both hands in the air as if to say, you wanted it, you got it.”