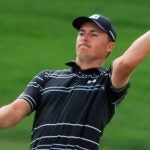 Jordan Spieth throws his ball to his caddie, Michael Greller, on Saturday after his hole in one on the 2nd hole at Bay Hill.

The par-3 2nd at Bay Hill is a 222-yard beast, with a trap in the front and in the back, and a green that slopes right to left. During Friday’s second round of the Arnold Palmer Invitational, players hit their tee shots a whopping 54 feet from the hole on average. Only 28 percent of players hit the green in regulation.

“Yeah, if you want to hold it, if you’re sort of splitting hairs, you want to hold that slope that banks right to left,” analyst Notah Begay said during the broadcast. “You ideally want to hold a cut into here. Wind coming out of the right, so all signs point to that if he can get enough distance out of a left-to-right ball flight, that’s the shot.”

He hit the green in regulation.

He hit his tee to zero feet, zero inches of the hole. It was in it. An ace.

Spieth’s ball landed just short of the green and right of the hole, bounced and began sliding left toward the hole. Seven seconds later, it was in. Spieth high-fived his caddie, Michael Greller. He fist-bumped his playing partner, Justin Rose. He dropped his iron in his bag, pointed to the crowd and took off his glove. His one followed a three on the par-4 first, and he moved to within a shot of the lead.

“I had all these notes prepared about how difficult this hole was,” Roberts said on the broadcast.

“Well, it is difficult,” Jacobsen said. “He just got a very fortunate bounce and a perfect roll.”

His next shot got neither.

Spieth, in Spieth style, would recover and make par, and he’s two shots behind leader Lee Westwood entering the final round.