Viktor Hovland’s long road trip is almost over, but he isn’t going anywhere 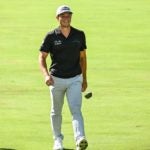 Viktor Hovland has made the cut in all six events since the PGA Tour's restart.

As soon as summer gets a firm grip on Norway, usually in late May or early June, you’ll see the locals out and about, enjoying the sun after a long and cold winter, barbecuing in the parks or at the beach, and generally just being happy. And as the weather gets warmer and warmer, so do the people.
–From the website VisitNorway.com

Viktor Hovland can tell you all about the Norwegian summer. The 22-year-old golfer is Norwegian, the first golfer from Norway to win on Tour. There’s no humidity in Norway in summer and a broiler reaches the mid-80s in mid-afternoon. It stays light late and you can eat dinner, linger over your krumkake cookies and easily get in 18 holes afterward.

Hovland can tell you about the American summer, too, this decidedly peculiar one most especially. He is the only golfer who has played, and made the cut, in each of the six tournaments since play resumed at the Colonial Country Club in mid-June. The curtain came back up on this season, and Hovland, a Tour rookie who won in Puerto Rico in February, finished in a tie for 23rd place. That was in Fort Worth. He celebrated by making the long drive to Hilton Head.

He finished T21 there. He then made the long drive to Hartford.

He finished T11 there. He then made the long drive to Detroit.

He finished T12 there. He then made the short (three hours) drive to Columbus.

He finished third in Columbus I.

Which gets us to this week, Columbus II, better known as the Memorial, played at the Muirfield Village Golf Club, a Jack Nicklaus enterprise if ever there was one.

After a first-round 74, Hovland was one bad nine holes away from missing the cut. All touring pros know how that goes. Your body is worn out. Your brain is fried. You play a bad nine. You may not mean to pack it in, but that’s what happens. As Arnold Palmer, who knew something about driving the Tour, used to say, “Put a fork in me — I’m done.”

Hovland responded to that 74 by playing his first eight holes on Friday in six under par. He was not done. He was moving on up.

When other players took a narrow foot bridge over a yard-wide creek, he descended down an embankment, leaped over the stream, and charged up the other side. He signed for a second-round 66. Nobody shot lower.

His body type and approach to the game come out of the Rory McIlroy playbook. He’s a no-fuss golfer, eager to hit driver wherever he can, fit and athletic and decisive. His swing is his own, with a distinctive double clutch at the top of his backswing, particularly noticeable with the driver. They say speed kills. Couldn’t prove it by Hovland. Slowish back, then the clutch, then whack.

His putting stroke is distinctive, too. He has a long grip on his putter, which is at least an inch longer than standard. He grips it well below the butt end of the putter and it accentuates the pendulum nature of his stroke. There’s not a bit of hit in it. He’s got rhythm.

He likes music. He likes driving. He likes music in his car. He likes playing in heat and humidity. The former Oklahoma State golfer is a real American now. Nice kid, too. Humble, shy, patient.

In Columbus, he is staying in a house that is only 10 minutes by car from the course. He wishes the drive were longer. He needs several songs on his way to work to get in the mood.

“As golfers, you’re just so used to seeing the airport and staying at the hotel,” Hovland said last week. Driving, he said, “makes the trip a little bit more memorable. I guess I associate each different week by the things I’ve seen on the road and how I got there. I like it.”

His English is perfect. His Norwegian is better. He’s not a big talker. He’s not flashy in any way, except for his golf. He’s a good listener. When his Friday playing partner, Ian Poulter, twice Hovland’s age, was prattling on and on with his caddie about how to play a downwind tee shot on a par-3, Hovland stared straight down the hole, unable to contain his amusement.

When he sat in the basement of Butler Cabin at the conclusion of last year’s Masters, he was grinning from ear-to-ear, said he was looking forward to the NCAA golf tournament and you could have mistaken him for an overeager Disneyland employee, ready to point you to Space Mountain. Fifteen months later, he’s a shoo-in to make the next European Ryder Cup team. There’s every reason to think he’s going to become a fixture in golf.

Next week the Tour goes to Minneapolis, 12 hours by car from Columbus. Minnesota has about 1 million people of Scandinavian descent. The days are long there, the humidity is low, the people are warm. Viktor Hovland will not be making the trip. After six straight weeks of driving and playing, driving and playing, Hovland is taking a week off.

Jack Nicklaus, in 1962, had a stretch in which he played 17 out of 18 weeks, from the start of the season through the U.S. Open, which he won. He was 22. Now he’s 80. Viktor Hovland isn’t looking to play 17 of 18 or anything like that. Six straight has been more than enough. But he hopes to see Nicklaus up-close early on Sunday night, with hardware coming in his direction.

Michael Bamberger may be reached at Michael_Bamberger@GOLF.com.