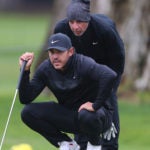 The year’s first major kicks off Thursday at TPC Harding Park in San Francisco with one of the best fields you’ll see all year. The first balls will be in the air at 7 a.m. local time, 10 a.m. ET. Here’s what you need to know as play gets underway Thursday in California.

This doesn’t happen all the time, folks. So kick back, relax, grab some popcorn and watch the golf. Need Friday night plans? Tiger Woods is set to tee off for his second round at 4:58 p.m. ET. He tees it up with Justin Thomas and Rory McIlroy. ESPN+ has plenty of coverage in the morning as well. As for Thursday’s prime-time window, Adam Scott, Bryson DeChambeau and Rickie Fowler get going at 4:47 p.m. ET.

You might have heard by now, but Brooks Koepka is vying to win his third straight PGA Championship after winning at Bellerive in 2018 and Bethpage Black in 2019. Koepka had a chance to win a third straight U.S. Open last year at Pebble Beach but finished just short of Gary Woodland. He gets the title defense of his title defense underway at 8:11 a.m. local time Thursday.

Much of the talk entering this event has surrounded Bryson DeChambeau, and we are certainly responsible for part of it. The other part is all Bryson, as the man has changed his body, swing and equipment to hit it farther than ever. He intends to bomb it all around TPC Harding Park in hopes of his first top 10 in a major. Will it work? Call us on Sunday.

5. The ball won’t fly that far

Not all golf courses are the same, nor are the climates they exist in. San Francisco, with its marine layer and heavy fog, will keep players from hitting the ball as far as they did in, say, Dublin, Ohio. So those aforementioned Bryson Bombs might only go 330 yards instead of 370 this week. This will play a factor not only on tee shots, but approaches as well. There will be a certain level of guesstimation taking place out there.

6. Under the radar storylines

A — Jordan Spieth going for the career grand slam.

B — Phil Mickelson finished in second place last week. Can he contend at 50?

D — No fans. How will it feel in crunch time without fans at a major?