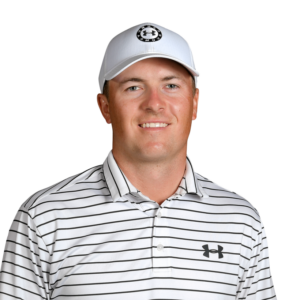 Winner of PGA Championship during the past five seasons and the current season: (Exempt through December 31, 2020).

Spieth comes from a family of athletes. His father was a baseball player at Lehigh and his mother was a basketballer at Moravian College. Spieth's younger brother, Steven, plays for HKK Zrinjski Mostar in Bosnia and Herzegovina following a stint for the Dallas Mavericks in the NBA's 2017 summer league and collegiate basketball at Brown University. Spieth's younger sister, Ellie, has special needs which Spieth says have inspired him to establish the Jordan Spieth Charitable Fund to raise awareness for special needs children.

Spieth played a number of sports growing up and admits baseball was his priority. But he decided to focus on golf aged 12 just before he met coach Cameron McCormick, an Australian instructor who originally moved to Dallas to play golf at Texas Tech. Spieth's rise through golf's junior ranks was meteoric: he shot 62 to win a tournament aged 12; won three consecutive Texas state championships; joined Tiger Woods as the only players to win multiple U.S. Junior Amateurs; finished 16th in a PGA Tour event aged 16 and led the UT Longhorns to an NCAA title.

During his breakout 2015 season, apparel giant Under Armour re-signed Spieth to a 10-year deal through 2025. Spieth was the Baltimore company's first head-to-toe ambassador on the PGA Tour as they launched into golf. The deal was believed to be financially comparable to Tiger Woods and Rory McIlroy's Nike mega contracts, including an annual eight-figure guarantee, bonuses, stock options and a line of clothing which include his signature Spieth shoe. Spieth also has sponsorship deals with AT&T, Coca Cola, Rolex, Titleist, Perfect Sense, NetJets, Club Champion and SuperStroke.

As prolific a champion Spieth is now considered, he was regarded as a weak closer until 2014. That was when Spieth won the Australian Open in Sydney when he fired a final-round 63 to win by six shots. Spieth credits that for teaching him how to seize a win and for inspiring the confidence required to claim the 2015 Masters and US Open only months later. Spieth's next Australian Open victory, in 2016, preceded his 2017 Open Championship win at Royal Birkdale.

Spieth married his high school sweetheart, Annie Verret, around Thanksgiving of 2018. The wedding was in Dallas and was attended by fellow PGA Tour pros Jason Dufner, Jimmy Walker, Rickie Fowler and Zach Johnson. The couple met in high school in Dallas before getting engaged in Christmas of 2017. Annie, a graduate of Texas Tech, works with the First Tee of Greater Dallas. The couple live in Spieth's Dallas mansion which was previously owned by Hunter Mahan. The sprawling house features a 12-car underground garage, pool, golf simulator and indoor basketball court.

Spieth is a keen fisherman, and once spent 2.5 hours trying to reel in a tuna in the Bahamas, only that it was eaten by a 300-pound black tip shark in the process.

Spieth is a huge Dallas sports fan, regularly seen on the sidelines of Cowboys' home games, courtside at the Mavericks or playing golf with a retired Tony Romo. When asked to name his dream foursome, Spieth included long-time Mavericks forward Dirk Nowitzki.

The Latest News on Jordan Spieth