The greens this week will be full of subtle slopes.

The early reviews on TPC Harding Park are beginning to trickle in from pros, and they tell a story of tight fairways, patchy rough, and small greens. A winning score in the region of 12-under seems to be the initial consensus, with potential bogey opportunities more prevalent than potential birdies.

I wanted to learn more about the course — and, specifically, the greens — so I reached out to Golf Logix, which is owned by our parent company, 8AM Golf. GolfLogix has mapped more than 14,000 greens and uses the data in both its green-reading books and its app, which includes a new “Putt Break” feature designed to help you better read putts. I wanted to use that intel to better understand the 2020 PGA Championship course. 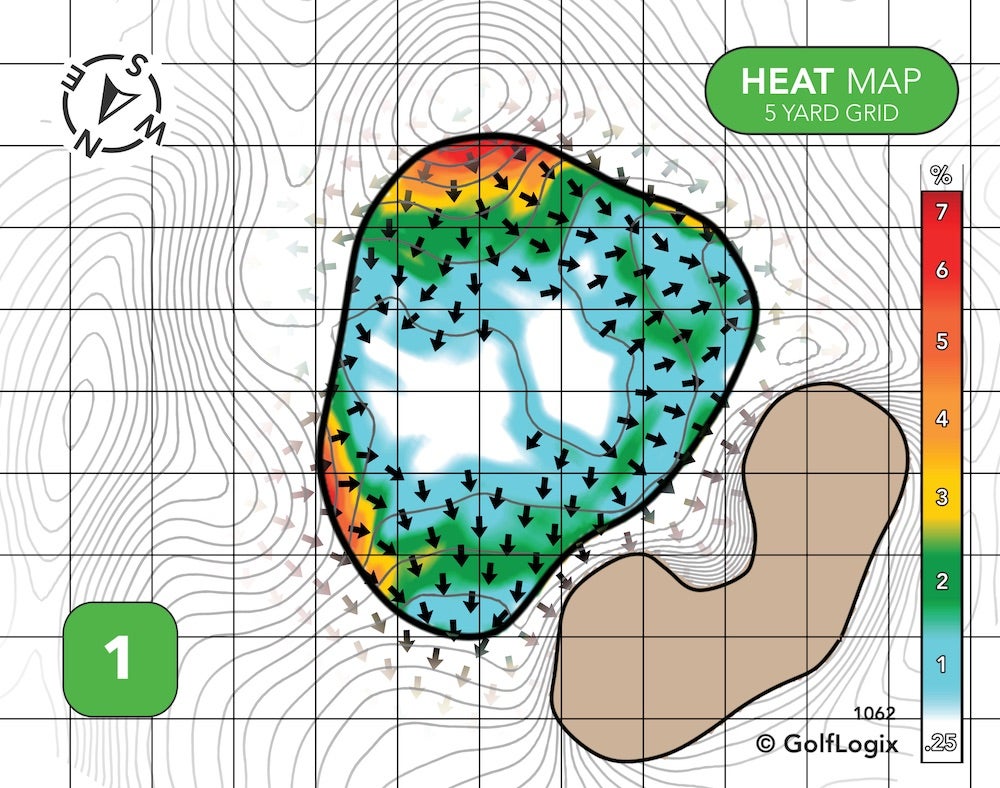 The first green doesn’t look too challenging. Fairly flat and back-to-front; the Sunday pin will likely be tucked back-right, but four shots into the flat middle of this green would give you a good look regardless of where the pin is, and offer a solid start to the day. 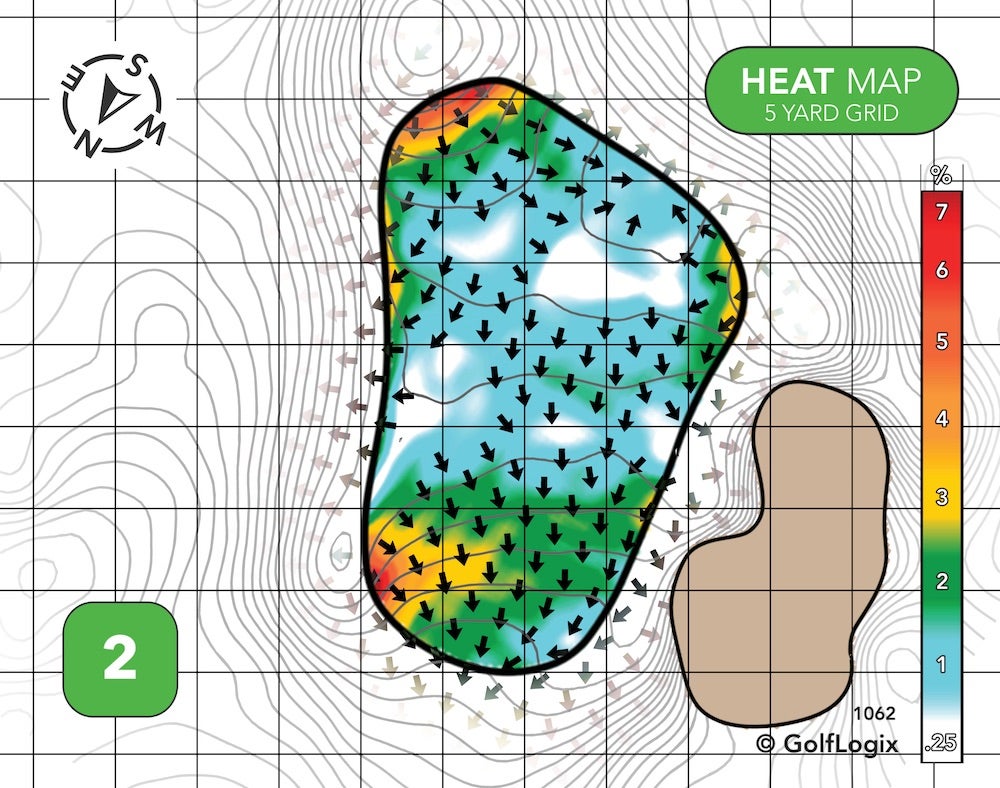 Another back-to-front green that’s mostly flat. In truth, it’s a good pin-hunting opportunity most days. The hardest pin on this green is probably down in the front, in which case, leaving yourself short is the best miss. Your ensuing shot would be a pretty short, uphill chip. 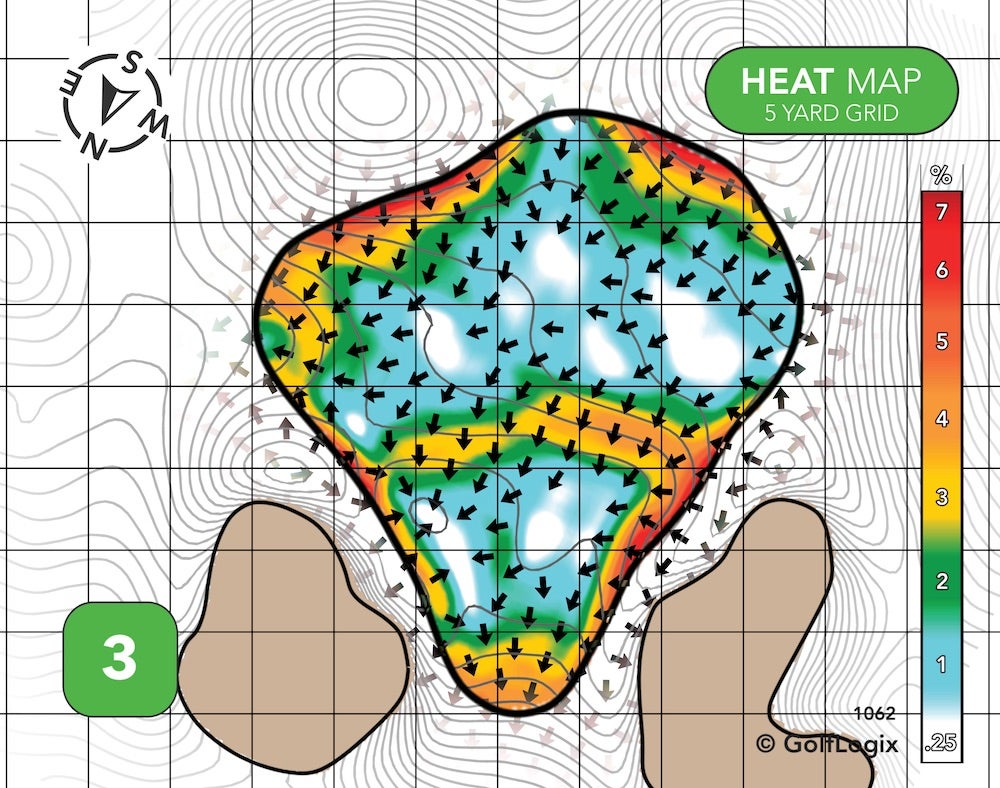 Great green! Maybe my favorite on the course. And tricky, too, because the ridge running though the middle of the green divides it into two sections, and the various drop-offs around the edges mean the playable area of this green is smaller than the actual size.

Middle of the back section is your bail-out zone wherever the pin is, and the backstop circling the back edge will help funnel balls into that area. Though, if the pin is up front, you may have a tricky putt.

Back right is the most accessible pin — aim for the bail-out zone with a fade — and tucking the pin way up front is almost certainly where it’ll be at some point over the weekend. Some pros might go chasing it and accept a potential bunker shot if they mis-hit it. As Jordan Spieth said on Monday, bunkers may be a good place to miss your shots this week:

“There’s not big lips and the sand is pure, so you don’t get in trouble if you miss shots in the sand out here.” 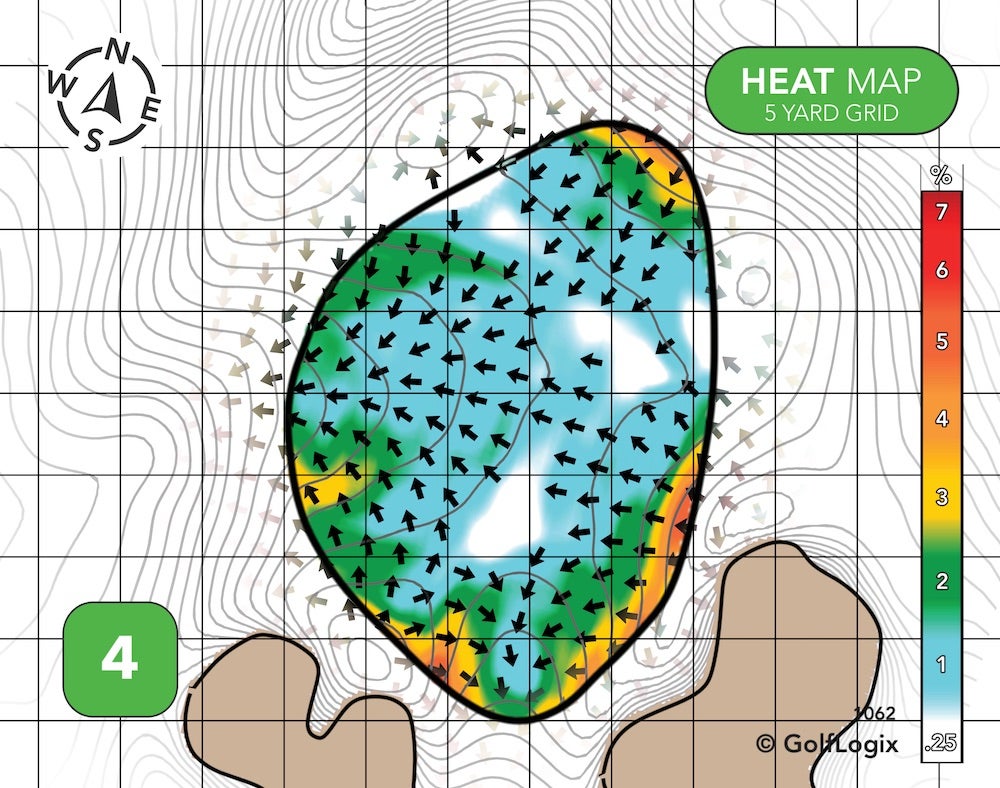 A Top 100 Teacher on-site this week told me that the par-5s are essential birdies for the contenders this week, and this helps explain why.

The green on the first par-5 on the course, which spans more than 600 yards, is pretty innocuous. The middle of the green is inviting, and somewhere up front is probably the hardest possible pin, and even that’s not too difficult. Big-time birdie opportunity here, especially with a wedge in your hands. 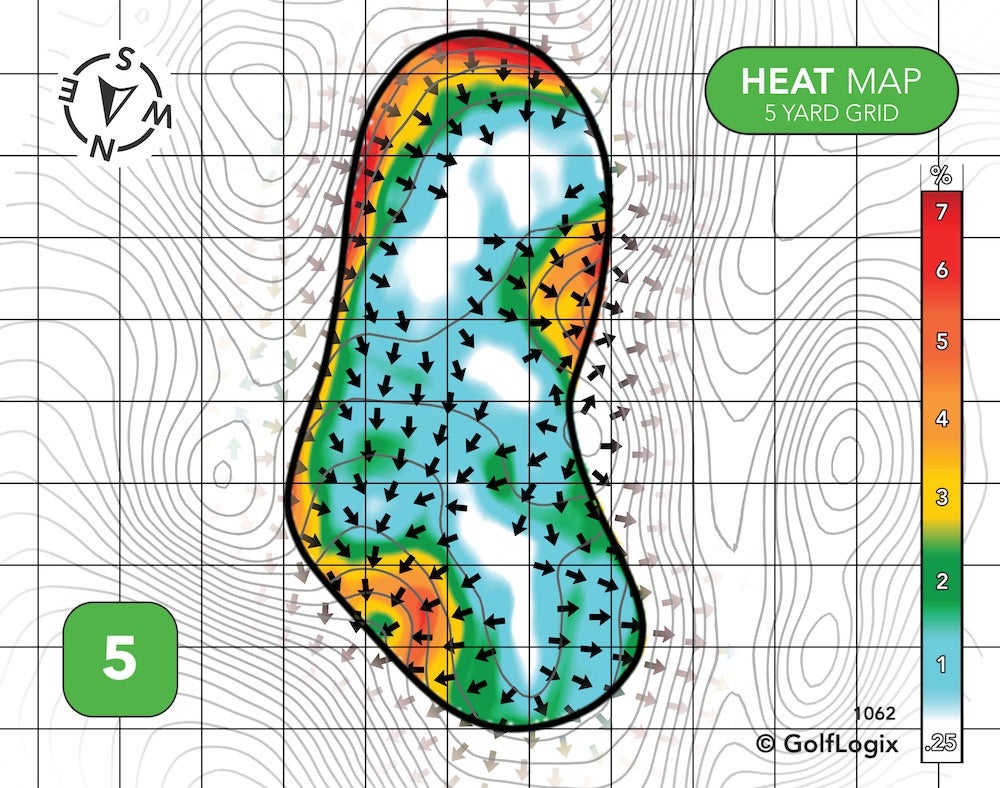 A narrow, snaking green here that drops off all down the right side. Doesn’t look like much good can come from missing down the right, especially when you have the potential of the left portion feeding back toward the flatter areas of the green. 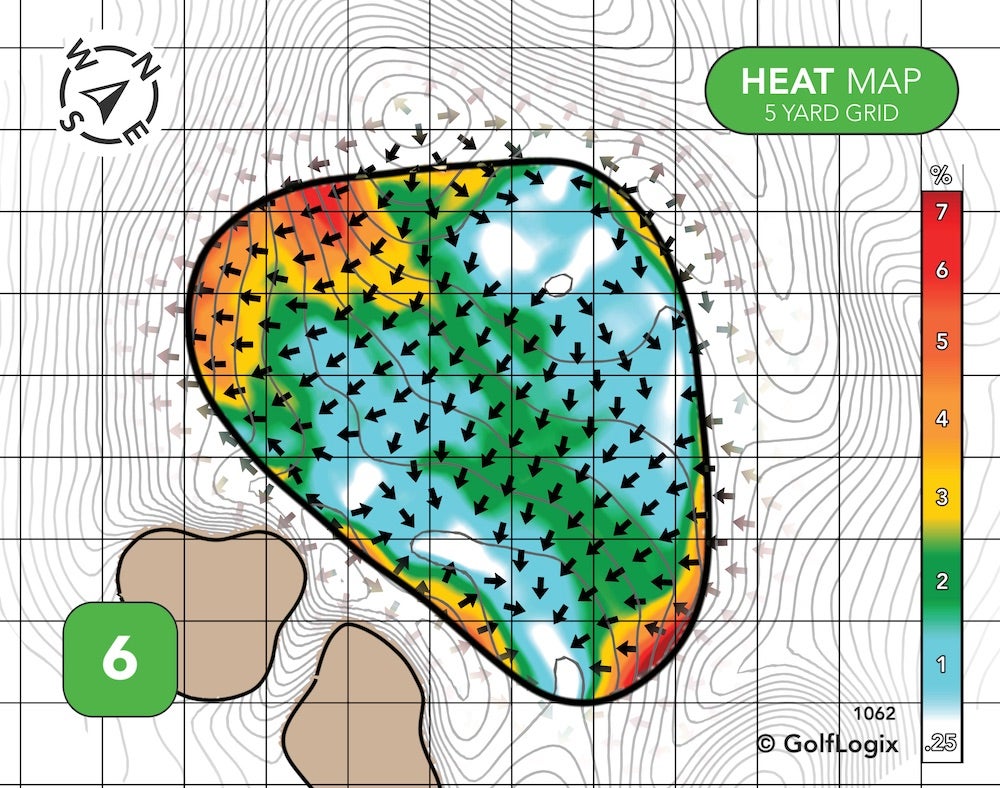 The most dangerous part of this green is the potential of your ball running off into one of those valleys long left or long right. If you can avoid that, most of the rest green features some pretty subtle breaks. 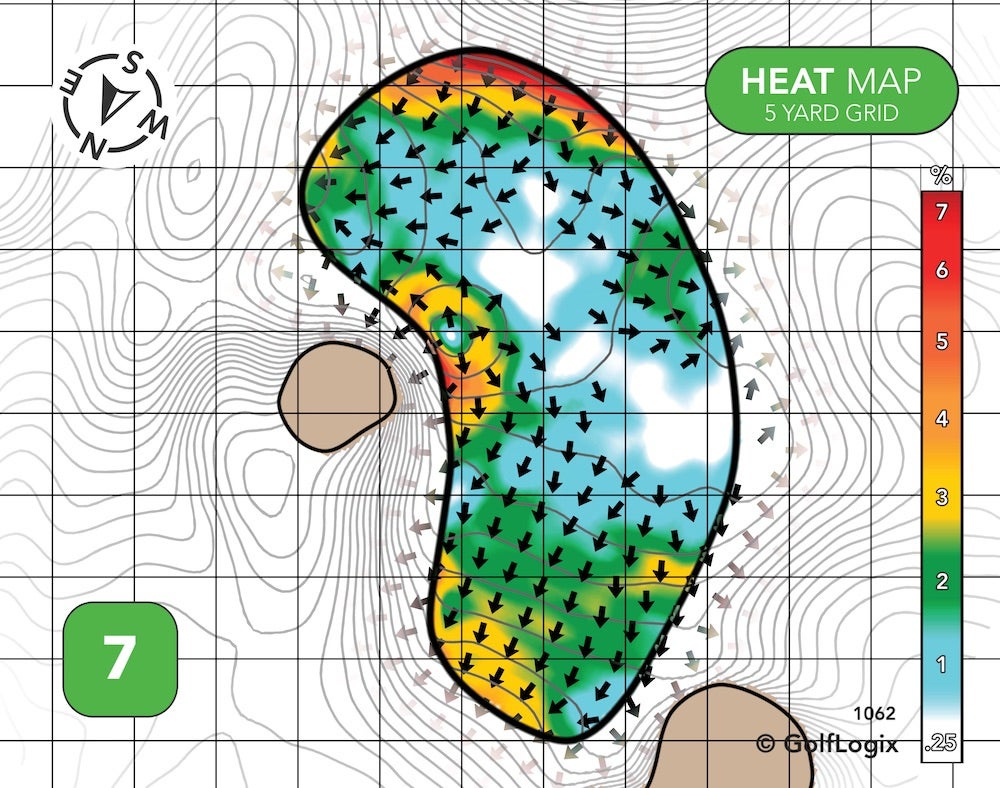 A spinny wedge could potentially funnel away from you on green at the short, ~340-yard par-4 7th. Control the spin coming into this one, and it provides another good birdie opportunity. 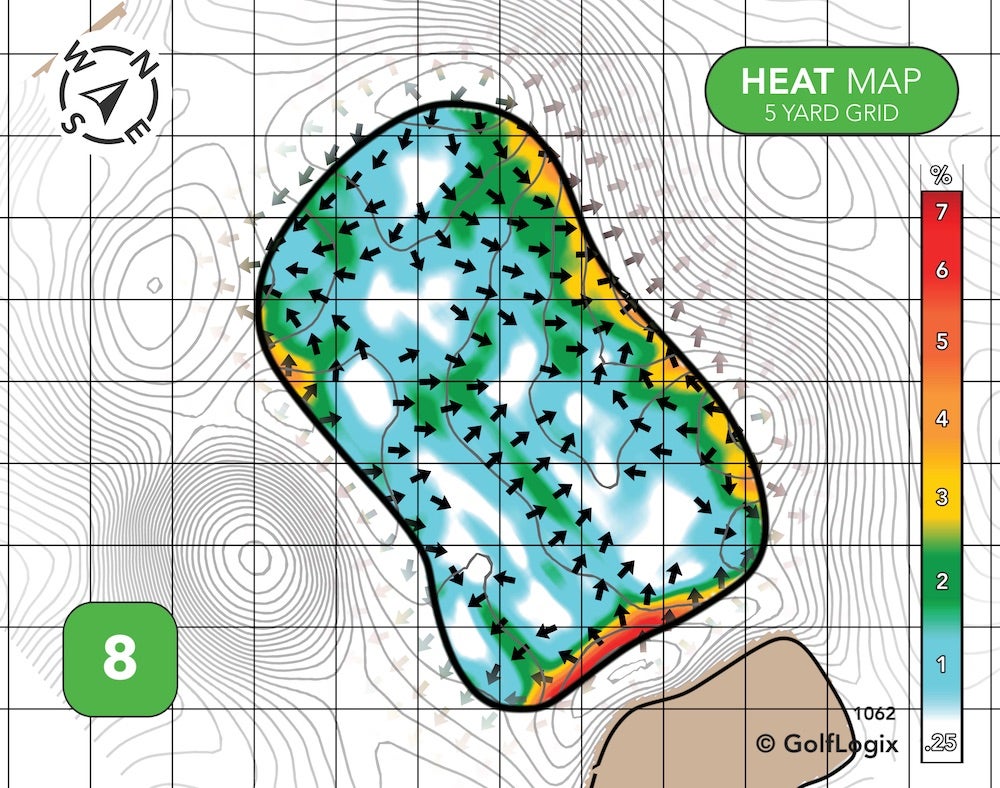 The green itself isn’t the issue on this ~230-yard par-3, it’s the shot into the hole. The primary concern is trying to make sure the ball doesn’t run off the back/back-right; the rest of the green itself is pretty flat. 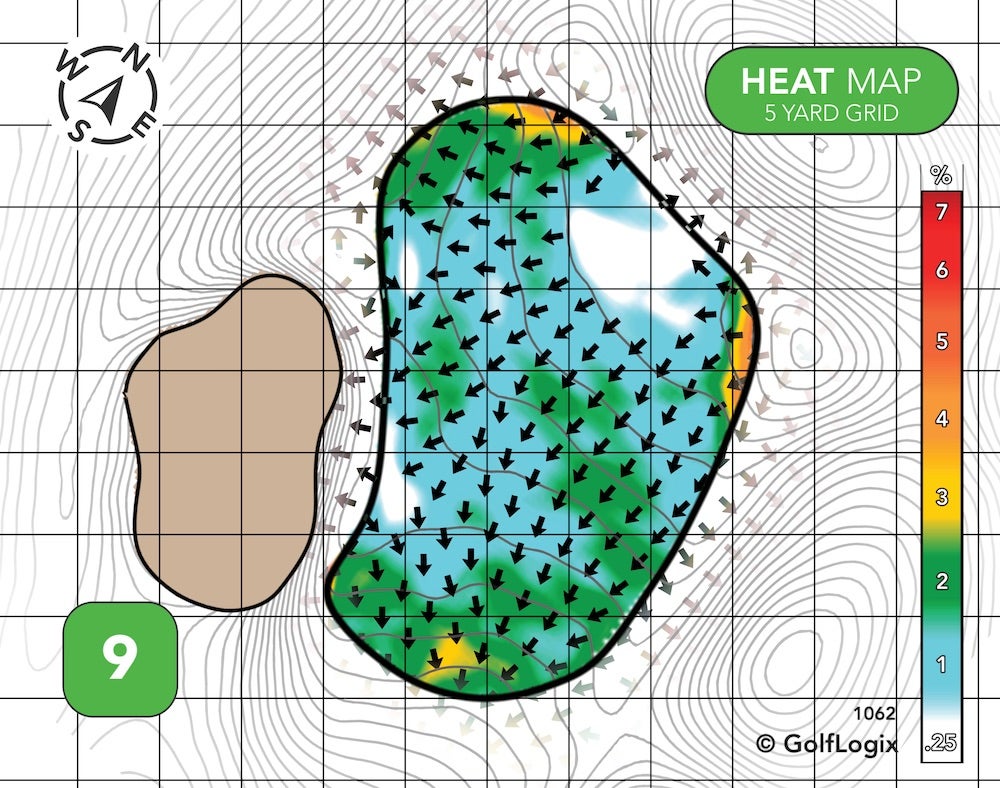 9. Stay below the hole

The green runs almost exclusively back-to-front. Hitting your ball past the pin, if the hole is up front, could leave you with a slippery putt, and a drop-off long right could threaten those who try to get greedy if and when the pin is on that crown.

Overall: stay somewhere below the hole and you should have a great birdie look. 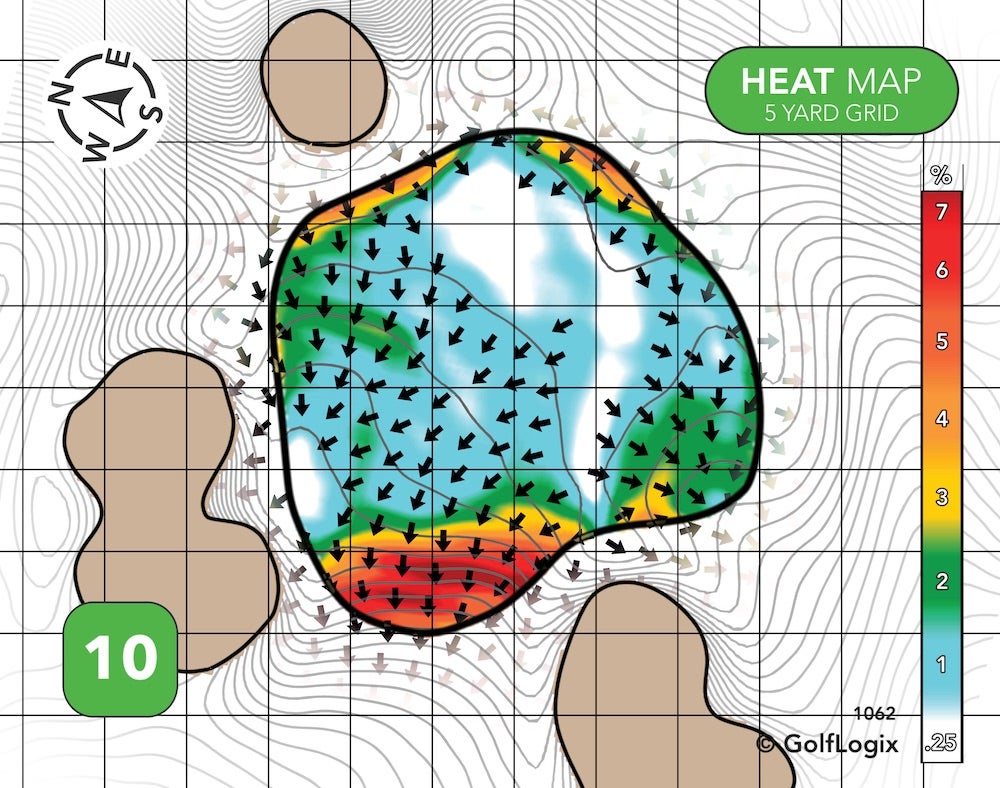 Another par-5, another birdie opportunity, which further underlines the point that the winner this week will be the one who runs up the margins on the par 5s. Might be difficult to get super close if the pin is front left, but if the pin is anywhere else, it’s full-on attack mode. 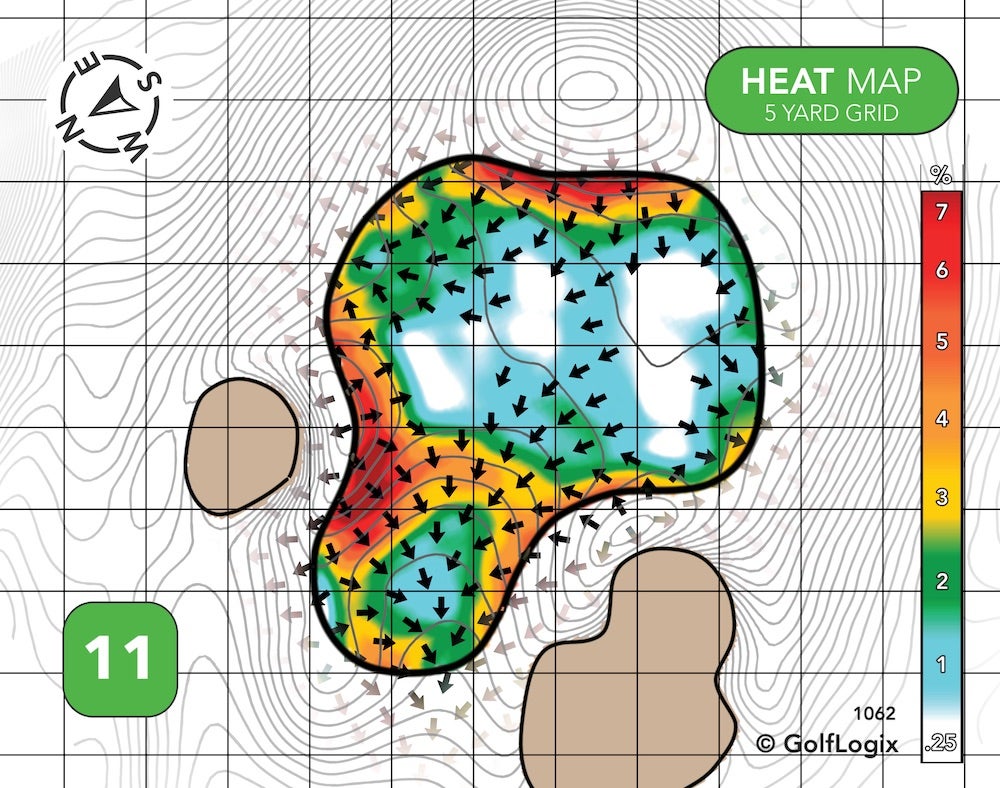 Another green that’s sectioned-off between front-and-back via a ridge in the middle. 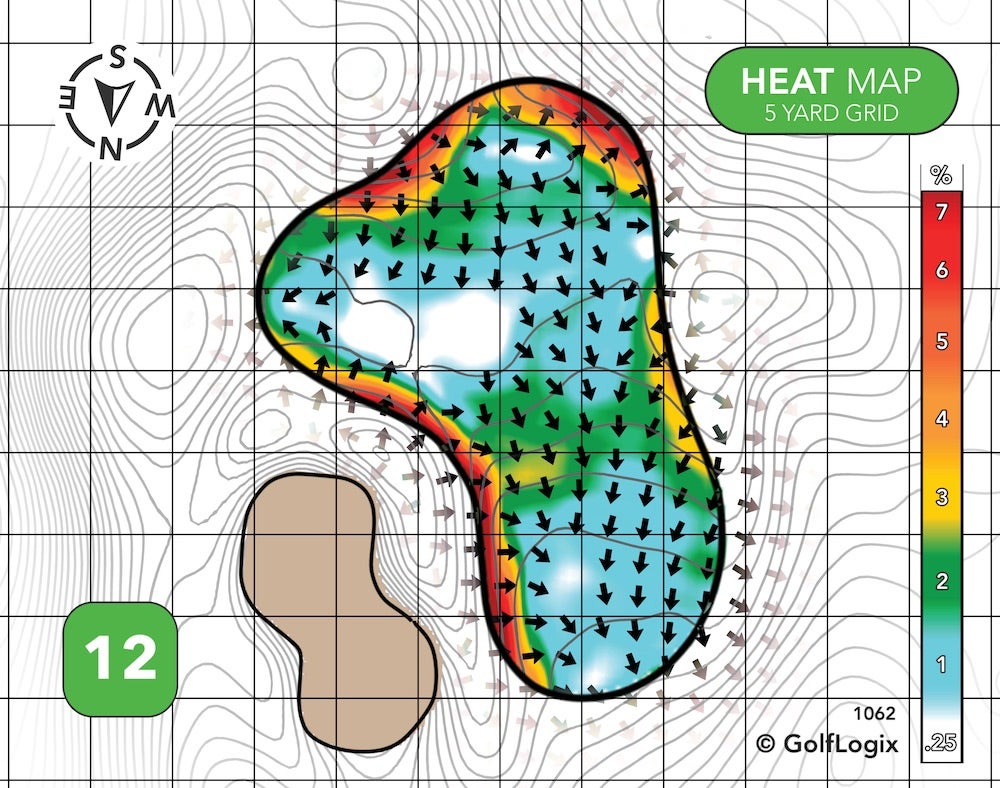 Tucking the pin over that bunker, long left, isn’t that difficult, because aiming for the center with a little draw sets up a pretty flat putt. The biggest threat, when the pin is located there, is not hitting your ball far enough back there and leaving yourself a long, uphill putt. Avoid that pitfall, and you’re looking at another potential birdie. 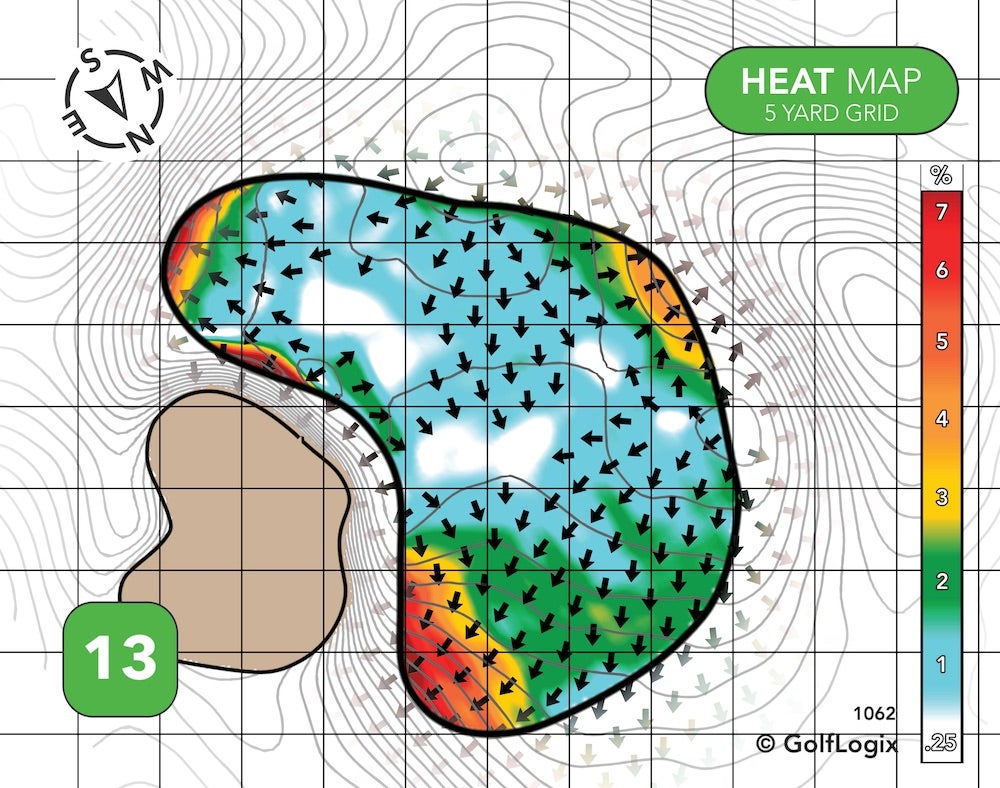 If the pin is up front, you’re going to have a dangerous downhill putt no matter what. If it’s anywhere else, anywhere in the middle is pretty stress-free. Middle with draw if the pin is back-left. 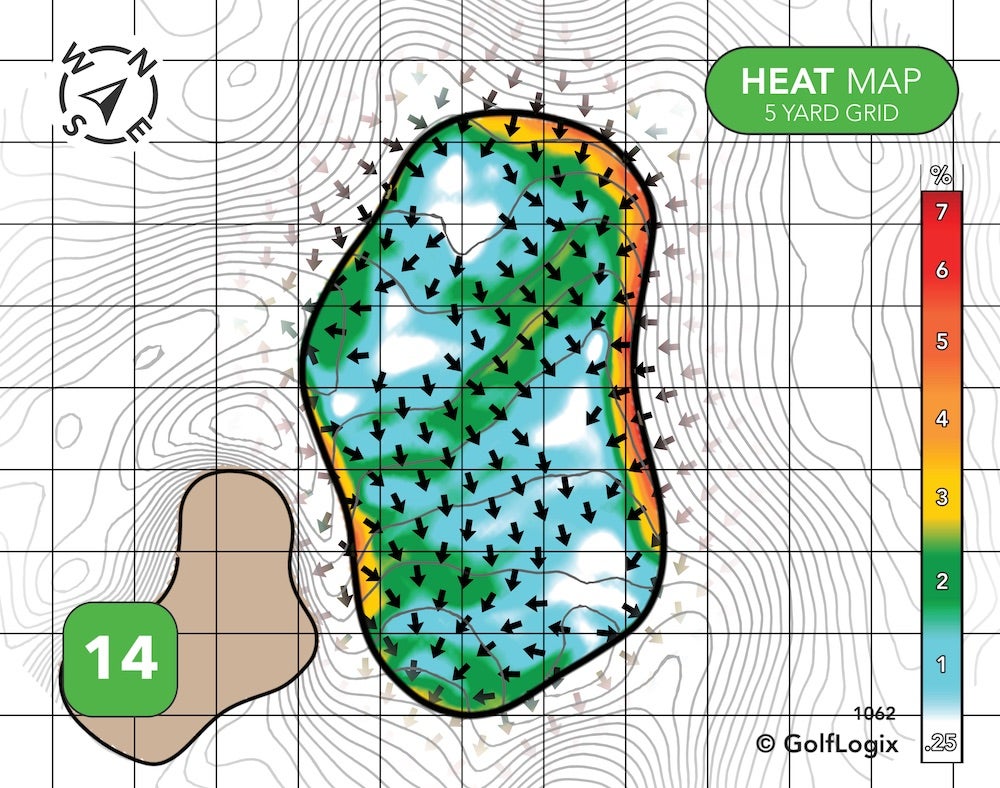 The green isn’t that big, but the pin will be accessible wherever you place it. Short is probably the best miss, and will give you a decent chip regardless of the pin position. The main issue on the 14th isn’t so much the green as the rest of hole itself, which spans more than 460 yards. 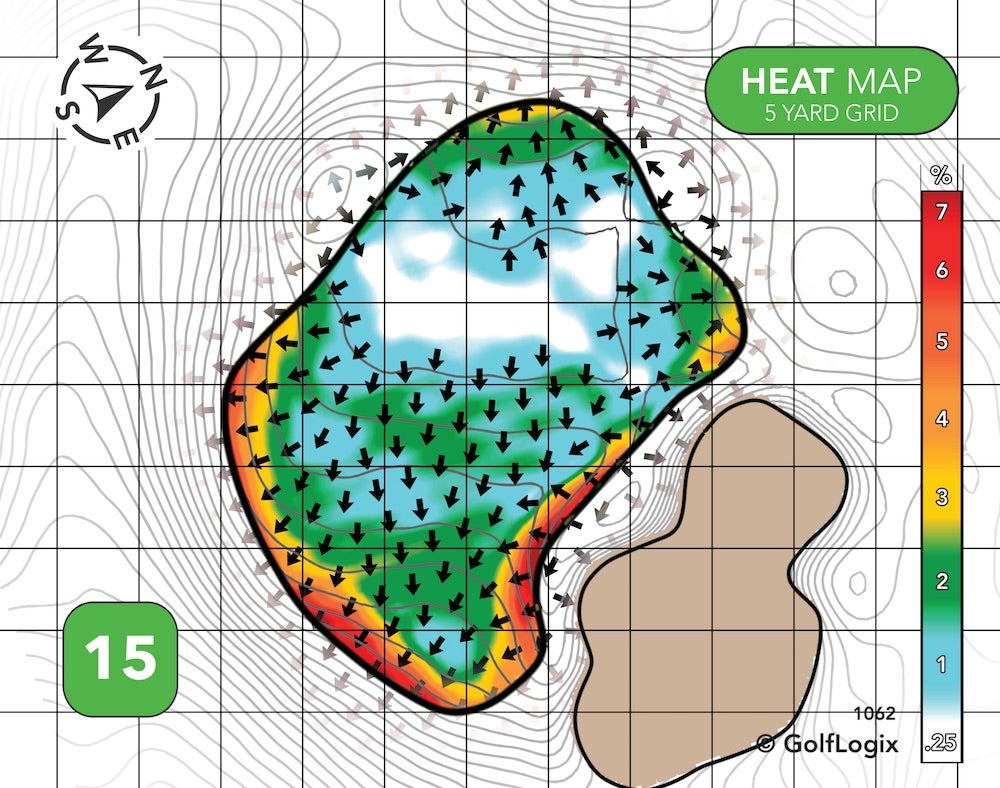 The various drop-offs circling the front mean the actual playing area of the front of the green is smaller than it looks. Middle of the green with a slight fade, when the pin is at the back, is the most accessible of the potential pin positions. 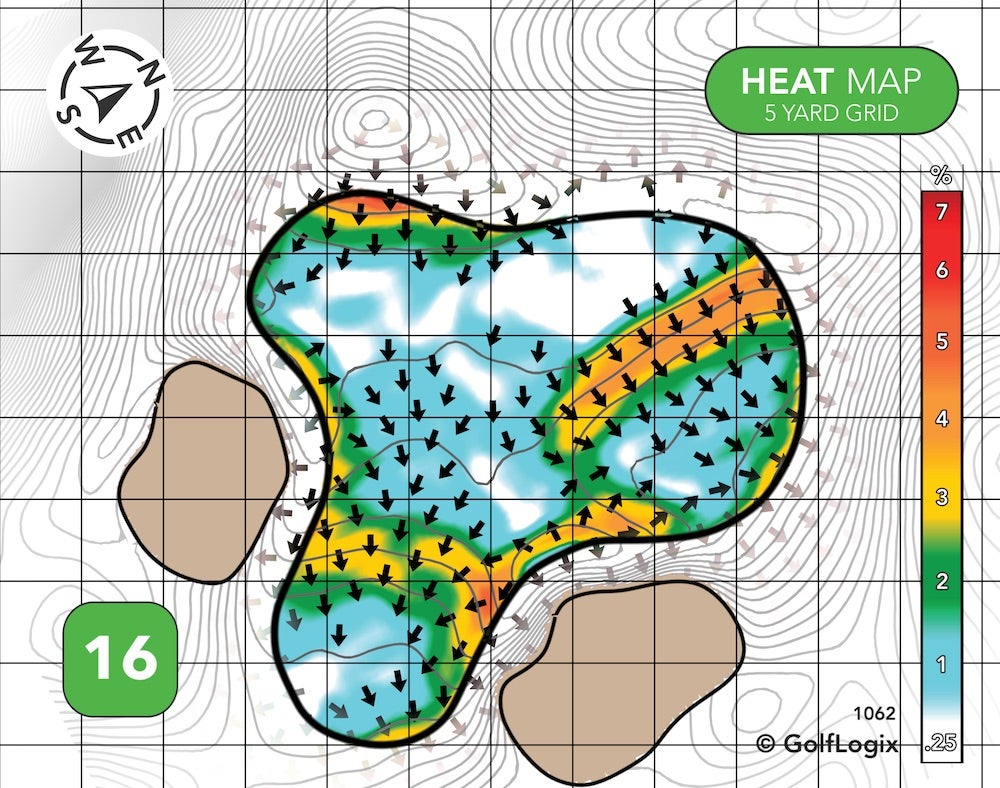 One of the most complex greens on the course with lots of different options. It’s a short hole, too — about 330 yards — and it’s in the closing stretch, so playing it well is essential.

Here’s how I see it:

If the pin is tucked in the “front-left section,” you could probably go straight at it with a short club knowing there’s a backstop just behind it. Just be careful not to overcook it. Something short left isn’t a bad miss, either, so short is better than long on that approach.

The “back-right section” is probably the most difficult, because it’s guarded by a slope and a bunker short. It’s a narrow margin, but if you judge the spin right, you could have a short shot funnel-in really close. You sort of have to try to go for it, too, because there’s no real bail-out option.

If the pin is in the “anywhere else” section, it’s perhaps the most accessible, but players need to be wary of drifting the ball too close to the aforementioned “back-right section.” 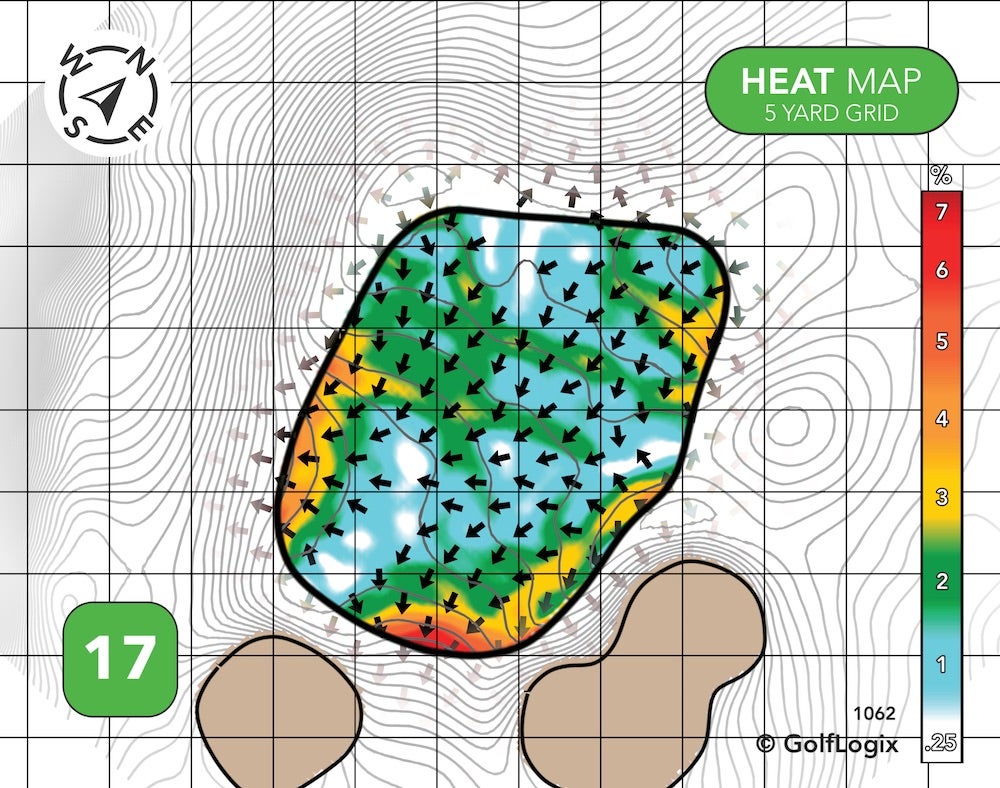 Not the biggest or flattest green on the course, with funnels leading off the green in practically every direction. Unless you need to stick it and are feeling it that day, four shots into the center of this green and trying to make a putt is the play. 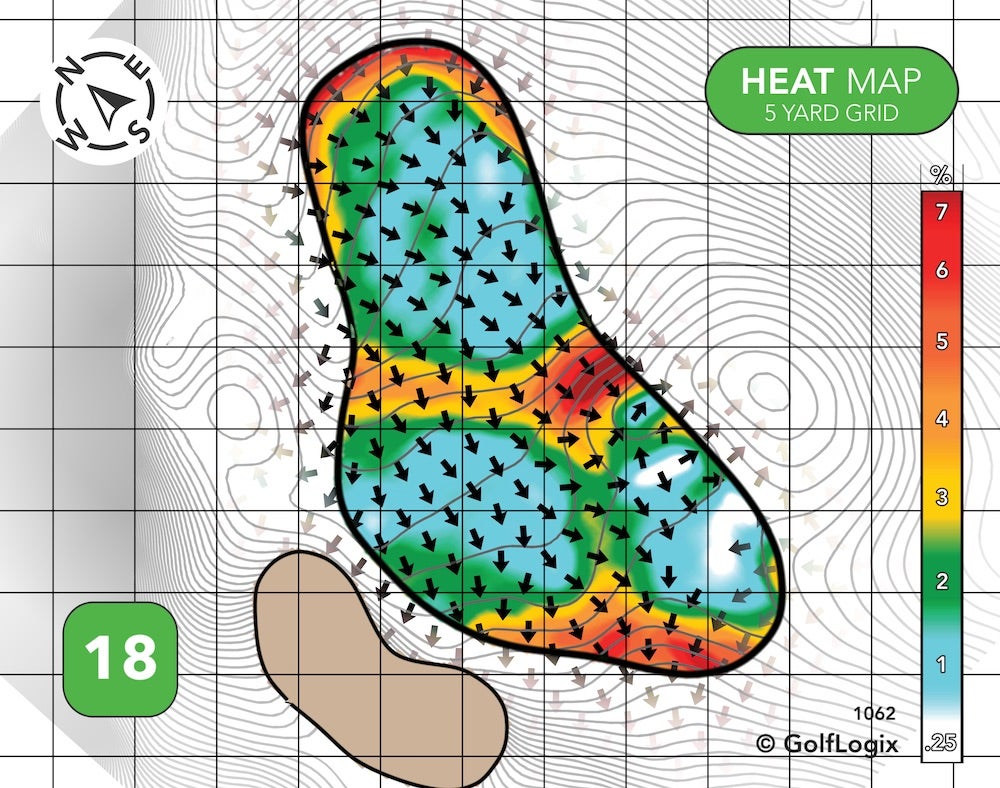 Another green that’s more like three greens in one. The back section is narrow, but perhaps presents the best opportunity; front-left and right sections are both guarded by a false front. That front left bunker is probably a decent miss for both those spots, but a front left pin will be more accessible than one on the front right.

GolfLogix and GOLF.com are operated by the same holding company, 8AM Golf. 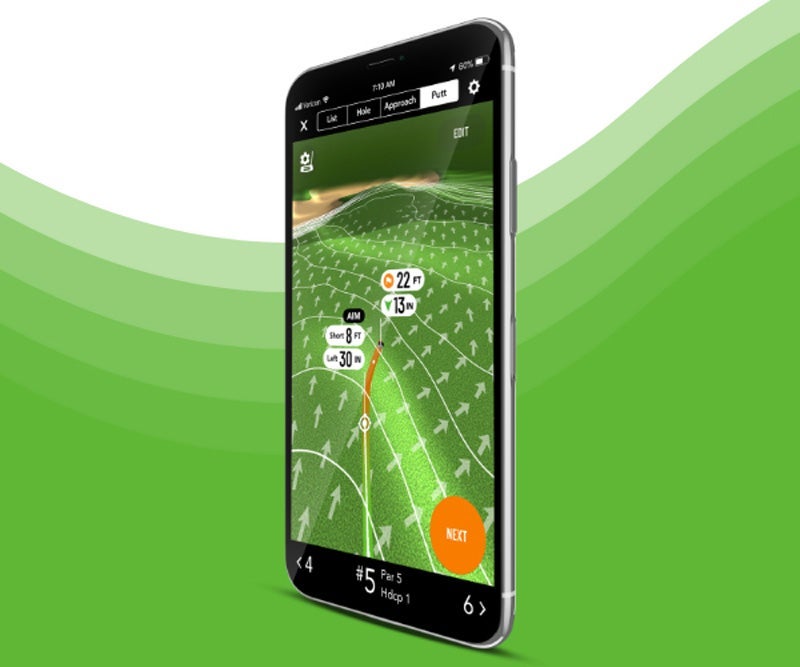