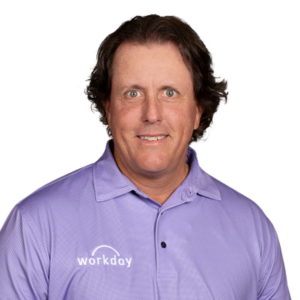 Winners of World Golf Championships events during the past three seasons. (Exempt through December 31, 2021)

Winning the 2010 Masters; his third title at Augusta National making him just the eighth player to win the green jacket three or more times. It was also the year after wife Amy was diagnosed with breast cancer.

Mickelson was introduced to golf aged 18 months, by his father, Philip. Phil Sr.'s career as a naval aviator ended in time to avoid the Vietnam War. As a commercial pilot working in shifts, Phil Sr.'s schedule allowed him to play golf with his son several times a week. A young Mickelson honed his transcendent short game on an extensive practice area in their San Diego backyard. As an amateur, Mickelson was a four-time All-American at Arizona State, where he won the 1990 U.S. Amateur. He also won the 1991 Northern Telecom Open, the last amateur to win a PGA Tour event.

In 2014, the Wall Street Journal reported that the FBI and SEC were investigating Mickelson and associates for insider trading, but the investigation found no evidence and concluded without any charges. Two years later, Mickelson was involved in another SEC complaint relating to alleged insider trading on Dean Foods stock in 2012. The SEC did not allege Mickelson was told any material about Dean Foods and disgorged Mickelson of the $931,000 profit he had made from trading its stock.

In 2009, Mickelson's wife Amy was diagnosed with breast cancer. Mickelson temporarily took a break from golf to be with Amy as she recovered in 2009 and 2010. Mickelson won the 2010 Masters and famously embraced Amy with an emotional hug and kiss on the 18th green at Augusta National.

Mickelson received his pilot's license in the late 1990s and used to fly a small Citation plane (with a co-pilot) to West Coast events on the PGA Tour. Mickelson owns a $40 million Gulfstream V which has a range of 6,700 miles, although Mickelson does not fly it personally. Mickelson famously used the plane to return to San Diego, California – following practice rounds at the 2013 US Open at Merion in Pennsylvania – in order to attend his daughter's eighth-grade graduation. He flew back to Merion overnight prior to the first round, which he led after shooting a 67.

In 2017, Mickelson ended a 25-year, wildly successful partnership with caddie Jim "Bones" Mackay. At the time, Mickelson had not won in four years, since the 2013 Open Championship, and wanted to reinvigorate his career. Mickelson put brother Tim on the bag and since then Mickelson has won the 2018 WGC-Mexico Championship and the 2019 Pebble Beach Pro Am. Tim Mickelson was the agent of Spanish young gun Jon Rahm, while Bones is now a commentator for NBC/Golf Channel while occasionally caddying for other golfers.

Mickelson has become health conscious since turning 40 eight years ago, making healthy eating a passion while furiously exercising. He owns a black belt in Taekwondo.

With wife, Amy, Mickelson created the Birdies for the Brave program, raising money and awareness for non-profit military homefront groups. The couple also founded the Phil and Amy Mickelson Foundation in 2004 – a non-profit focused on supporting a variety of youth and family initiatives.

The Latest News on Phil Mickelson