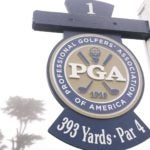 The sign that greets players on TPC Harding Park's 1st tee at the 2020 PGA Championship.

The first round of major championship golf in more than a year begins Thursday at the 2020 PGA Championship at TPC Harding Park. You can find full first round tee times at the bottom of this post.

Notable groupings for PGA Championship Round 1

This year’s PGA is setting up to be a memorable one, even without spectators on the grounds to watch the action in person. The tournament’s field is the strongest so far this year, and the featured groupings are packed with star players.

At 11:33 a.m. ET on Thursday, the grouping with perhaps the most firepower hits their opening tee shots on the 10th hole. That group includes new world No. 1 Justin Thomas, who rose to the top of the OWGR with a win last week at the WGC-FedEx St. Jude Invitational. He’ll be joined by two-time PGA champion Rory McIlroy and Tiger Woods. For Woods, it will be only his fifth round since the Tour returned in early June.

Another group to look out for with some major credentials is the grouping of defending champion Brooks Koepka, reigning U.S. Open champ Gary Woodland and reigning Open champion Shane Lowry. Koepka will have history on his mind as he goes for his third-straight PGA Championship win. They tee off for the first round two spots ahead of Tiger’s group at 11:11 a.m. ET.

Check out the full tee times for the first round of the 2020 PGA Championship below.

'One more time, Chuck!' John Daly, Barkley walk into a bar and ... sing