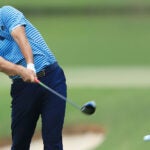 Jon Rahm tees off on the 4th hole at East Lake Golf Club on Friday.

At the Tour Championship, Johnson and Rahm exchanged birdies on the 2nd, 6th, 12th, 13th and 15th. Rahm closed the gap as he had one less bogey and one more birdie, his 3 on the par-4 16th pulling him into a share of the lead. Johnson finished with a 3-under 67 and Rahm a 5-under 65, and both are at 13-under overall.

“I mean, the only birdie we didn’t share was mine on 16. Besides that we birdied every single hole together, which is kind of unique, right? We just didn’t have bogeys on the same bogeys,” Rahm said.

“I mean, technically it is a continuation, right?” Rahm added. “I kind of stole that tournament last week from him and he started with a two-shot lead, so hopefully I can steal this one, as well.”

Justin Thomas is in contention

Johnson and Rahm lead by two over Justin Thomas, by four over Rory McIlroy and by six over Abraham Ancer.

McIlroy ties for the day low round

Four days after his wife, Erica, gave birth to their first child, Poppy, McIlroy shot a 6-under 64, tied for the day’s best round with Ancer, and his second-best round of the year.

“Yeah, golf was the furthest thing from my mind the first few days this week,” said McIlroy, who started the day seven shots behind Johnson. “And then once we got home on Wednesday and everything was good and mom and baby were healthy, that sort of took a load off my mind, and that meant I could come here and somewhat focus on what I’m supposed to do.”