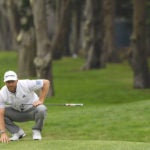 Dustin Johnson lines up a putt on the 12th hole at TPC Harding Park on Saturday.

The leader is a former world No. 1. Three players are two shots back, and one of those players is the two-time defending champion. One of the two players a stroke back is 25. The other is 24. The present meets the future. Here are three things you should know after Saturday’s third round of the PGA Championship at TPC Harding Park in San Francisco.

Dustin Johnson bogeyed the 6th hole and double-bogeyed the 9th. He played the rest of the holes 8-under on his way to a 5-under 65, a 9-under total and a one-shot lead over Scottie Scheffler and Cameron Champ.

Johnson will be seeking his second major, following his win at the 2016 U.S. Open.

“I definitely have experience in this situation that definitely will help tomorrow,” Johnson said. “I’ve been in the hunt a bunch of times in a major. I’ve got one major, so having that experience is definitely going to be beneficial tomorrow.

“You know, but it’s one of those things. Still going to have to go out and play really good golf. This is a tough golf course. Greens are getting really firm. They are fast. So I think the wind is going to blow again tomorrow, so it’s going to play difficult. I look forward to the challenge, and you know, I will definitely be relying on a lot of that experience that I have.”

2. Brooks Koepka is in the hunt.

The player with the most majors in the top 10 is just two strokes back.

Brooks Koepka, the two-time defending champion and a four-time major winner overall, birdied the 4th hole then overcame three straight bogeys on the back nine with a birdie on the 16th and a birdie on the 18th to shoot a 1-under 69. Joining him at 7-under overall are Collin Morikawa and Paul Casey.

Haotong Li, who started the day with a two-shot lead, shot a 3-over 73.

3. Tiger Woods is struggling with his putting .

Tiger Woods has played well from tee to green. He’s played poorly from green to hole.

During Friday’s second round, Tiger Woods made 48 feet, 11 inches of putts on his way to a 2-over 72. A lot of tap-ins. He was about 20 feet better during Saturday’s third round on his way to another 72.

Before the tournament, Woods switched to a longer putter to help with his surgically repaired back. Woods said it’s not the putter’s fault he’s putting poorly. It’s the person holding the putter.

“It is about reading the greens,” Woods said. “I just haven’t hit the putts hard enough. My feel and what I’m seeing just aren’t matching up.”