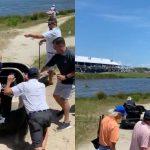 John Daly has been using a cart at the PGA since 2019.

KIAWAH ISLAND, S.C. — Back in 2019, the PGA Championship granted John Daly permission to use a golf cart during competition. Daly has osteoarthritis in his right knee that limits the amount he can walk, so using a cart allows him to keep playing the major championship he won 30 years ago.

Except on the sandy cart paths of Kiawah Island, that posed a problem.

After hitting his tee shot to the left of the par-3 17th green, Daly departed the tee box and encountered a particularly soft patch of sand — where I’ve seen first-hand multiple carts have gotten stuck this week. And that’s what happened with Daly’s on Thursday.

Sand flying up into the air but the cart not moving anywhere, that’s when Daly’s loyal fans clicked into gear and gave the cart a little push…

Which moments later, sent Daly driving off into the sunset.

He made double bogey on the hole, and went on to shoot 85. Barstool’s Foreplay captured the full video: