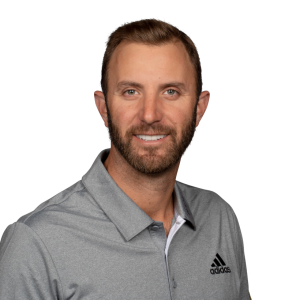 Johnson vanquished the demons of near misses at the majors when he triumphed at the 2016 U.S. Open at Oakmont for his first major championship trophy.

In 2014, Johnson was suspended by the PGA Tour for six months after a drug test returned a positive result for cocaine, forcing Johnson to miss the PGA Championship. It was Johnson’s third failed drug test, following one for marijuana in 2009 and two for cocaine, in 2012 and 2014. In August, Johnson announced he would take a leave of personal absence with the events bringing to light Johnson’s conduct off the course – including frequent sighting at bars in Jupiter and a sexual indiscretion with at least one wife of a fellow PGA Tour player.

Johnson has had brother, Austin, on the bag for six years since he first caddied for DJ at the Perth International in Australia in 2013. DJ admits Austin is his “best friend” and the pair have achieved enormous success on the course. Austin graduated from the Charleston Southern University in 2013 and was considering a career in pharmaceutical sales before he got the call to carry his brother’s clubs. Austin played point guard for the Charleston Southern University basketball team.

Johnson had a history of collapses and controversies at the majors before finally triumphing at the 2016 US Open. Johnson led going into the final round at the 2010 US Open at Pebble Beach, but playing in the last pairing on Sunday, capitulated with an 82 to finish tied for eighth as Graeme McDowell won. Then in the final round of the 2010 PGA Championship, Johnson held a one-shot lead entering the final hole when he received a two-stroke penalty for grounding his club in a bunker, dropping him to a tie for fifth place. Even his 2016 US Open victory was shrouded in controversy; he was informed by the USGA mid-round of a looming penalty for his ball accidentally moving on a green.

In August 2013, Johnson became engaged to model, singer, and celebutante Paulina Gretzky, daughter of hockey great Wayne Gretzky, after seven months of dating. The pair have not yet married. Golf fanatic Gretzky Sr. is a regular amateur partner of Johnson’s in the Pebble Beach Pro Am. Johnson and Paulina have two sons, Tatum Gretzky and River Jones. In 2018, Gretzky deleted all images of Johnson from her Instagram account, sparking rumors of a split. However, the couple made up after Johnson released a statement insisting he was committed to being a family man.

Johnson was the fifth golfer to surpass $50 million in career prize money on the PGA Tour. With $57 million, Johnson sits fifth on the all-time list behind Tiger Woods, Phil Mickelson, Vijay Singh and Jim Furyk. Johnson is a potent winner, with his 19 PGA Tour titles placing him behind only Woods and Mickelson as most wins by active players on the PGA Tour. When Johnson claimed the 2018 Tournament of Champions, it was his 11th consecutive season with a win on the PGA Tour dating back to his rookie year in 2008 when he won the Turning Stone Resort Championship.

Johnson is a lover of all things water sports. He owns a boat which he and brother/caddie Austin spend copious amounts of time taking out around Jupiter, FL and to the Bahamas, fishing and diving along the way.

Johnson and fiancée Paulina are avid globetrotters and document their travels well on social media. Johnson isn’t afraid of long haul flights to play events across the globe, and regularly takes the family, including children, Tatum and River Jones, along with him.

Johnson owns a large suit collection, containing around 30 Prada and Dolce & Gabbana suits. At 6-foot-4, he is a 41 long. The obsession may be related to his James Bond film fandom, which also influenced his decision to own a $300,000 Aston Martin.

The Latest News on Dustin Johnson